Wireguard freezes after a short time

Hi, friends, after having purchased for almost a month and made several attempts with settings and firmware, I still cannot get my AR750S's wireguard network to work well, once started after a few hours or minutes the traffic goes into congestion, so particular the block concerns the "ListenPort", when the network is blocked I have to manually update this port and at that point the wireguard network traffic returns to work. 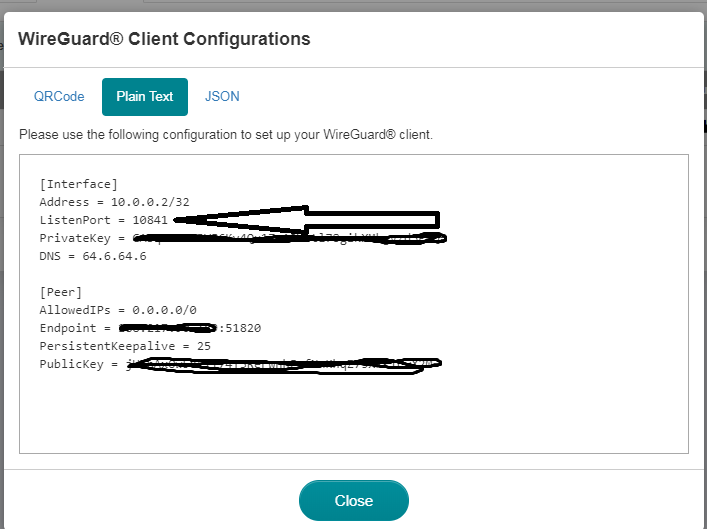 wg707×529 16 KB
I tried with LUCI to configure everything so that it can work, I reset the firmware several times, currently I use the relase openwrt-ar750s-3.104.tar

Can anyone tell me what trick I can follow to make my wireguard network work well?

Some quick points before I comment on the specific problem...

Now, on to your problem...
normally, a ListenPort is only necessary for the inbound connections. So if this peer is acting as a client, you can just remove the ListenPort entirely. Try that and see if it helps.

Unfortunately, as the official GL.inet website shows, the version of LUCI that I have indicated is the latest available release, however I tried to remove the "listenport" item from the client, but this automatically reappears.

I don't understand why the parameters I read through SSH are in one way and then the Gl.inet interface shows them in another.

If you don't mind loosing the proprietary interface, it looks like this device is supported by the current version of standard OpenWRT

No, I have no problem to eliminate the proprietary interface (GL.inet) also because it works very badly, which stable OPENWRT relase can I download for my ar750s ext. Router?
Thanks

Look under the "installation" section on the device info page that @aboaboit linked. That provides a direct link to the firmware image (current supports is 19.07.3 which is the latest as of right now).

I found these but I don't know which one to choose for my GL.inet ar750s:

the @aboaboit link is wrong I have the AR750S version while that is the AR750.

Although I took the official version of OPENWRT to upgrade my AR750S device, I get the following error: 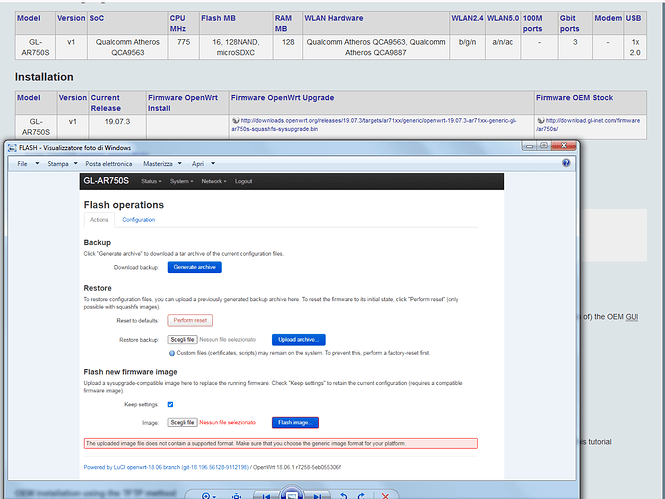 Not to be snarky here, but it's actually really easy to find. You can look directly on the TOH, but in this case I literally just typed into google "AR750S OpenWrt"

You may need to ssh into the device and then use sysupgrade command with -f (force) and -n (don't save settings).

I arrived before you to find him, read above ...

did you try the command line sysupgrade process?

I downloaded the SYSUPGRADE file on the PC how can I transfer it to / tmp via SSH?

On a Mac or Linux system:

Try using the IP address instead of the name of the device.

nothing to do, not even with command line SYSUPGRADE manages to go into execution.

Did you copy the file to your /tmp/ directory? The screenshot shows that you did an ls and the file doesn’t appear to be in the directory.
Sorry - didn’t see it on the right side. Stupid mobile screens