Hi,
I have completed setup of WireGuard client on my router based on this tutorial.

I have found Dynamic connection that is adding metric to WAN interface.
My questions for this implementation:

Actually I would need a wireguard watchdog that pings VPN DNS, and in case there's no response restores WAN connectivity.

Mullvad is sharing a watchdog script here, but this reboots the router.

Any advise is highly appreciated.

My understanding is that this:

Routing example: PBR with netifd Route all IPv4 traffic from an interface named 'novpn' over the 'wan' interface Assuming interfaces named wan and novpn, (1) add a default route out of the wan interface to a routing table 10 and (2) add a rule to...

will automatically result in failover to 'wan' if WireGuard peer is down. Admittedly I have not been able to test this because my peer is so reliable, but if I just manually stop the WireGuard interface then traffic gets rerouted through 'wan'.

Can anyone please confirm?

I have verified Dynamic connection by taking WireGuard interface down (ifdown wg0).
The default route switches from (with wg0 up)

In my opinion this works as expected.

this should help you
https://www.gastonotero.com/blog/creating-a-vpn-only-lan-in-openwrt

Or use a watchdog restart interface after fails

As written before, for the scenario that WireGuard interface is down, Dynamic connection works as expected.

Now I added a wg-watchdog script that checks if DNS servers, that are only reachable via VPN tunnel, respond. In case there's no response WireGuard interface will be stopped.
Here's the current version of wg-watchdog.sh script:

WireGuard will route all traffic to it

I know this already.
But this is not the topic of this discussion.

Or use a watchdog restart interface after fails opkg install watchcat

In my opinion there's an issue with function restart interface.
In case the DNS servers offered by VPN provider, that are only reachable via VPN tunnel, are not reachable, it would not help to restart the interface because there's potentially a root cause on VPN provider side for this issue.
In exactly this scenario I need to ensure that any internet connection uses WAN, means I need to take WireGuard interface down.

tried this on your firewall, put the wan interface on all the others you always want the internet to work 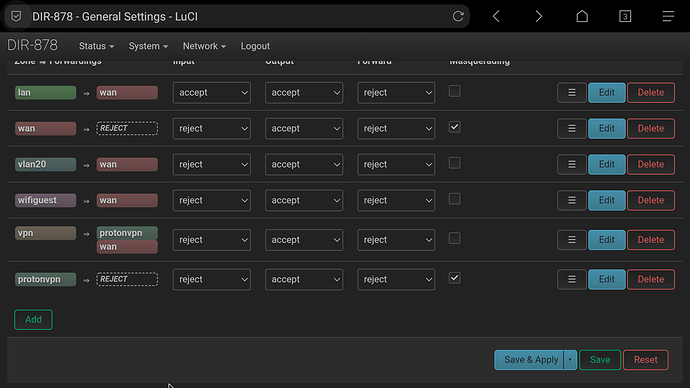 I don't understand this setup.
Why do you configure a vpn interface with forward from wan and protonvpn?
What is the use-case for this?

I don't route all my traffic to WireGuard, I just route one interface, called "vpn"

Also, this configuration is used to use the package (vpn-policy-routing) to route a device through wg0 or wan

I understood that interface vpn is like a "consolidation interface" for any outbound traffic.
This means there could be multiple WireGuard, OpenVPN, etc. interfaces.

However I don't understand how this works if WireGuard connection drops that WAN will take over?
Could you please share the relevant network configuration?

You seem to have correctly latched onto the concern I had, namely that just because traffic is redirected when interface goes down, this doesn't necessarily mean connectivity is restored if a peer stops responding.

The netifd solution indeed seems appropriate for setting up VPN as default with 'wan' as a failover, but I'm just not sure what happens when a peer stops responding.

Else the title in:

Routing example: PBR with netifd Route all IPv4 traffic from an interface named 'novpn' over the 'wan' interface Assuming interfaces named wan and novpn, (1) add a default route out of the wan interface to a routing table 10 and (2) add a rule to...

is rather misleading, right?

I guess this could be the solution I'm looking for.

However, the "big" unknown is:
How does it recognize that VPN is down or not working?

I'm not sure if WireGuard interface goes down if peer stops responding.
But I can verify this because my VPN account validity ends on Saturday. After this date I cannot connect to VPN endpoint anymore.

I'm not sure if WireGuard interface goes down if peer stops responding.
But I can verify this because my VPN account validity ends on Saturday. After this date I cannot connect to VPN endpoint anymore.

So "Route LAN to VPN with failover to WAN" is the next test.
If you want to test this implementation prior to the end of your account validity anniversary; you could force the issue by changing your account credentials from/on a mobile device, thus making the routers credentials obsolete. This would kill the peer, and the next logic would be the failover to WAN.

That's a hard turn to test but an idea non-the-less.

Is my understanding correct that these settings (with route and rule) are not required?