Due to the wiki merge, the dataentries and datatables need to be updated.

Several tasks on the to do list are already done. Apart from small changes like adding multi-value capabilities for some datafields and changing download urls from https -> http, I added several new datafields.

Not that much interest in the dataentries...

Links to demowiki (please be patient while pages are loading):

If there is no negative feedback or other change requests, I will implement the new dataentries soonish (during the weekend or so).
After implementation of the new dataentries, the datatables (toh:views + on devicepages) will be updated accordingly.

Thank you for all the thought you have put into updating the DataEntry pages. I will also apologize for not having the time to reflect on all this.

In general, all these changes are good. It seems as if you are planning to run a script over all these pages to make changes in a uniform way. If this is so, I offer a few items that could make it better.

Thanks for your feedback!

I still would like these pages to say “Edit this page only using the Edit button at the bottom of this page” (I never think of that button as being either “left” or “right”, but at the bottom.

To me, the lower-left button is something different than the bottom button: 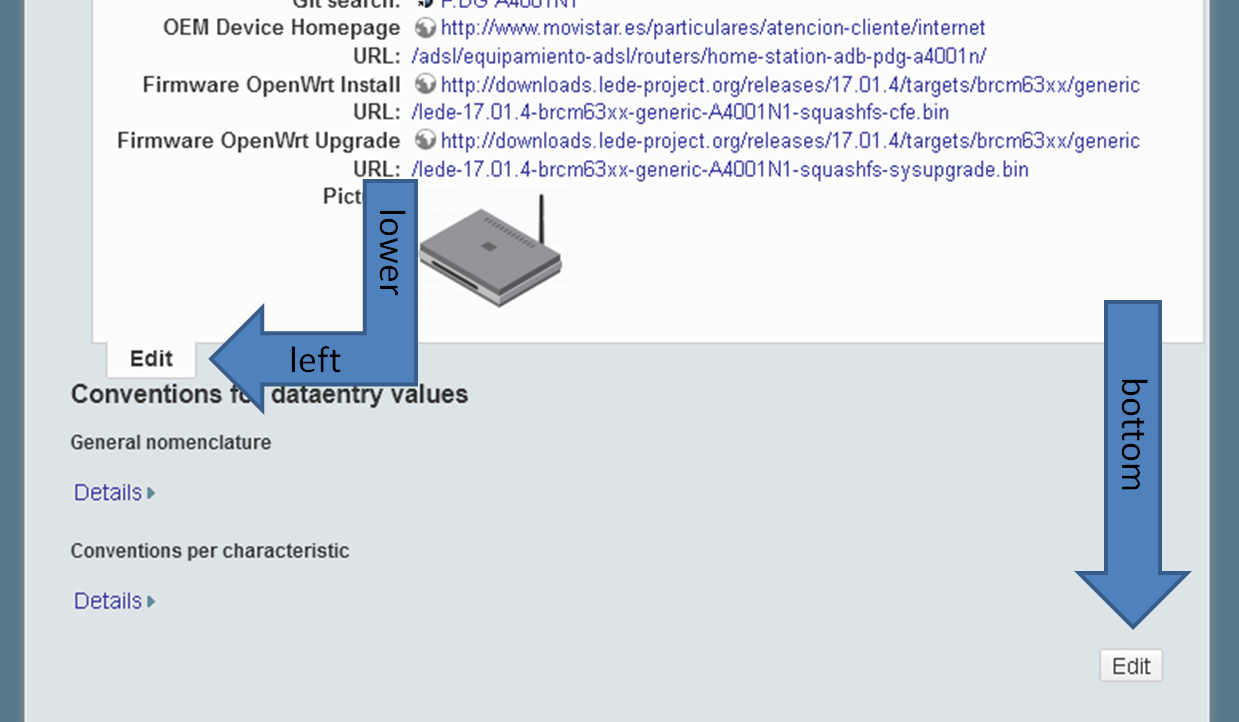 I certainly hope the Installation Methods and Recovery Methods are used heavily, to prevent people from repeating the same, slightly incorrect/inconsistent procedures all over the place. This is an experiment worth having, especially if we can curate a few good procedures.

You used the right wording: It's an experiment. No idea how far we will get with this, but it's a step in - I think - the right direction: modularity.

I still would like these pages to say “Edit this page only using the Edit button at the bottom of this page” (I never think of that button as being either “left” or “right”, but at the bottom.

To me, the lower-left button is something different than the bottom button:

AHAH! I finally understand why you have not implemented my wise suggestion

Let's make both "Edit" buttons go away. We don't need them for the TOC (the page disables it), so we can change ===== Usage ===== to **Usage** (and the same for Dataentry) to get the same visual look without the danger of people discovering the wrong "Edit" button.

PS I really like the Theme dropdown in the prototype/demo wiki. I wonder if it might be better to place at the bottom of the navigation (say, below Contact Us)

I still would appreciate if someone could take a look at the "unknown wifi driver" table:
https://openwrt.org/toh/views/toh_admin_wlandriver
If you happen to know what wifi driver to use for a device in this table, either let me know or edit the corresponding dataentry yourself.

I still would appreciate if someone could take a look at the “unknown wifi driver” table:

If you happen to know what wifi driver to use for a device in this table, either let me know or edit the corresponding dataentry yourself.

No, we don't necessarily need to publicize this. I was just checking to see when we might have enough work in place to ask for comments/praise/help. I think the answer is, "Not yet." Thanks.

I would change the page at https://openwrt.org/docs/driver.wlan/mwlwifi to reflect the current status of the drivers (broken features, known bugs, ...) at the latest stable LEDE, latest OpenWrt snapshot, and my own builds. All three are feeding from the same source (https://github.com/kaloz/mwlwifi), so all is needed is to compare commit id's, review the fixes on each commit, and browse open and closed issues.

I can do that myself, if you agree with it.

I can do that myself, if you agree with it.

Sure, go ahead! Your help is much appreciated!

This would be amazing for all the various wifi drivers. It's hard to figure out what works well and what doesn't. I'd also like to hear which features of make-wifi-fast have been implemented in which drivers.

It would actually be really need for all platforms (wifi, SoC, and full device) to have some sort of semi-automated changelog based on commits. Of course, I have no idea how hard that would be.

@tmomas - great ideas all around. I like the recovery idea, although there are sometimes slight variations among different devices. These could be the result of upgrades or differences in the underlying hardware. They do tend to be similar and I think it's worth the experiment.

May I make one more suggestion - it's sort of silly, but it took me a while to realize that you could actually go directly from the TOH to the device page because the link is in its own column. My brain was expecting the device model or similar to be the link to the device page. If it were possible to do that, I think it would help people coming for the first time.

Ok, actually two suggestions - it may make sense to have the CPU and wifi fields be discrete data instead of free text. Then you can search/sort more reliably by those fields with something like a dropdown menu.

This topic was automatically closed 10 hours after the last reply. New replies are no longer allowed.