What is the purpose of bridging an SSID to multiple bridge interfaces?

According to this article:

The LAN bridge combines the WLAN interface(s) with the wired LAN ports to create a single logical network. In the interface configuration set option type bridge or in LuCI Network→Interfaces→LAN Bridge interfaces box and select the physical interfaces to bridge together. All switch ports in the bridge will act as a single network.

By default, the wireless interface is bridged to br-lan, so that all wireless clients (interface wlan0) will connect to the router and get DHCP leases just like other wired clients (interface lan), because they are all on a bridge facing the interface br-lan of the CPU. It is what most users want.

Things get funny when a single WLAN interface is allowed to be bridged to multiple bridge interfaces. For example, the SSID OpenWrt on radio0 can be part of both br-lan and br-wan at the same time. I don't understand the logic behind such scenario. Can someone explain? 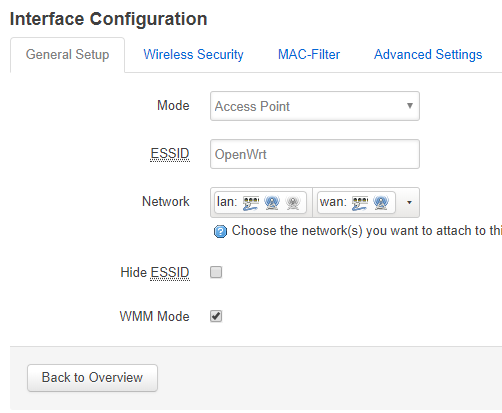 It makes no sense to attach a wifi SSID to multiple bridges (which is also not supported by the kernel, the wlan interface will end up in one of the bridges only).

In some circumstances though it makes sense to attach an SSID to multiple non-bridge networks. You can e.g. have two logical "empty", non bridged networks, one with proto DHCP and one with proto DHCPv6, then attach the wifi SSID to both of them. The wireless interface will then inherit the IP settings of both attached networks and become both a DHCP and a DHCPv6 client.

Though the UI suggests you can, you actually don't ever want to do that. Think of trying to put a Y in an Ethernet cable. It just won't work. The AP must be attached to exactly one thing.