What is the best router for my situation?

Greetings Guys,
I want to buy a router, install open wrt on it and I would like to know your opinion.

I read that a modem/router combo should not be used for internet optimization and more security.
I currently have technicolor tg582n and tp link w9960 v1.2
I currently have ADSL with a down speed between 13mbps - 19.5 mbps. and thinking to upgrade to VDSL but I guess the down speed won't change much.

Edit: we currently use 3-5 devices everyday except for some days this number goes to 7-9 max.

Any help is much appreciated.
Stay safe!

Your speeds are low enough that most anything will work, you do not need expensive stuff. On other hand that price range is pretty tight. If you save for a month or two and could double the range to $60 you'd have a lot more options it seems.

I don't know anything about the C20 other than it's a fairly low powered device and has several versions.

What exactly is wrong with your current setup?

Oh my bad!
I should've mentioned that my real (WIFI/ethernet 2.4 GHZ speed) is about 10 mbps (+- 20%).
And because I live in an apartment there are a lot of routers that are using 2.4 ghz and I want to get the best of my connection I thought about getting a dual band.
I thought about replacing the old flat 2 wire cable that is currently in the same tubes as the electrical cables into maybe a cat 5e one that runs alone but I really don't know if that'll make any difference or it is the modem/router setup?

As far as I know and my ISP technician told me that I am getting on the NID a speed of 19.5 mbps, in my router/modem combo I get between 13-15 mbps and using my ethernet or wifi I get a speed of 10 mbps (when tested with an external device).

Plus, Security is one of my concerns.

After a long talk.... and maybe overwhelming... What should I do? Could it be improved? Is it worth it?

strange that with wifi the speed goes even worse... 20mbps is a very low datarate for 2.4ghz even with a very far router

I see a couple of different issues here:

For about $40, the GL.iNet GL-AR750 works with openwrt easily out of the box (just install the standard version over their "custom" one). It's got both bands. Uses a 100Mbps ethernet port which is plenty for your ~ 20Mbps service and has decent flash size, RAM, and CPU speed for the money. I've got a friend who's using them as access points in a house with a long extended floorplan and it works well.

WiFiAnalyzer (Vrem version) detected between 76 and 88 APs (depending on the location of the phone between rooms).

is the GL.iNet GL-AR750 good for long term usage?

One more question regarding the 2.4 ghz and 5 ghz. Do you think there is a possibility to put a 5 ghz antenna on a 2.4 ghz router?

WiFiAnalyzer (Vrem version) detected between 76 and 88 APs (depending on the location of the phone between rooms).

yeah. sucks. that's why your wifi is so terrible. How about in the 5GHz band? take a screenshot of the band maps and upload them. 5GHz will need to be supported on your devices though. If I lived in a place like what you're describing I'd just turn off 2.4GHz and use 5GHz only.

Also I recommend to wire in as many things as you can. Desktop computers should be wired. put a switch near where you like to use your laptop so you can plug it in. Plug in a smart TV instead of relying on wifi. that kind of stuff.

is the GL.iNet GL-AR750 good for long term usage?

It's worked 100% of the time since Nov for my sister in law. Seems good.

Do you think there is a possibility to put a 5 ghz antenna on a 2.4 ghz router?

basically no. You have to add a 5GHz radio. If your router is like a modular thing, like a server computer or something then maybe, but not for a consumer device. 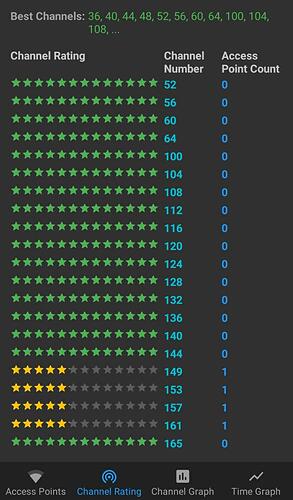 Thank you for your help!

One more thing, how (from where) can I learn the networking stuff and more about routers? I know a little bit about electronics but it seems that I know nothing (lol).

how to make a 5ghz radio? a 5ghz antenna won't do the work?

how to make a 5ghz radio? a 5ghz antenna won't do the work?

Your screenshot shows that 5GHz is going to be a lot better for you. what you want now is a dual band access point or router.

As for educational resources to help beginners, its hard to recommend I would like a good recommendation myself but I don't know one.

Ok thanks for your help! have a great day