can you post or send me the trick you used to unbrick? I used that latest snapshot build and have bricked my r6700v2. i have tried to flash using nmrpflash on many different versions of the stock firmware but each time after reboot router is still solid red light. i tried using nmrpflash using openwrt snapshot firmware and upgrade bin.

I am basically encountering this same issue. I had the snapshot installed, it was basically working, had luci on even, and then it just crashed before I could get anything proper set up so I tried to reboot and now nothing is reachable in any capacity. I can't get it to take firmware this way which is supposed to be the "unbrick". It just continues to be unreachable after turning it off and back on again. I'm following the directions exactly.

Is there any help or do I have an expensive paperweight now?

Update: it gets weird. It apparently took the Netgear firmware but I'm locked out of wired access. I can connect through wifi and it appears there though. Just let it sit for a long while since nothing else was working and this happened. It definitely has the proper default ip address so I fail to understand why I can't reach it any kind of normal way. It shows up on my other router in the devices list for what it is if I plug it up, I just can't exactly get into it still unless I use a wireless connection, which is a giant issue.

Ok, now this is getting creepy. It's rebooted itself in front of me and suddenly I'm back to being able to use the web browser access via something not wireless. Would still like to know why the brick when it seemed fine then froze and crashed like that and basically nothing was messed with yet except the gui.

Figured out there's definitely something wrong with the snapshot image offered. It will cause a brick. Every time. You have to immediately do the sysupgrade with that image to have hope of not getting a brick and then even still, you eventually hit a wall trying to install packages where it locks down to a read only file system and you can't update anything or install anything new with error 255, and yes it has Internet access and the opkg update still works, also losing the wireless radios and showing them disabled if you even try to do the aforementioned, only being remedied by a reboot entirely.

Some progress made after a reset and restore via the backup file. This one definitely needs a big bright lettered warning about "unstable build" or something because this isn't for the easily frustrated or those not willing to fight with it and this seems to be the only option for alternative to stock firmware for this model. 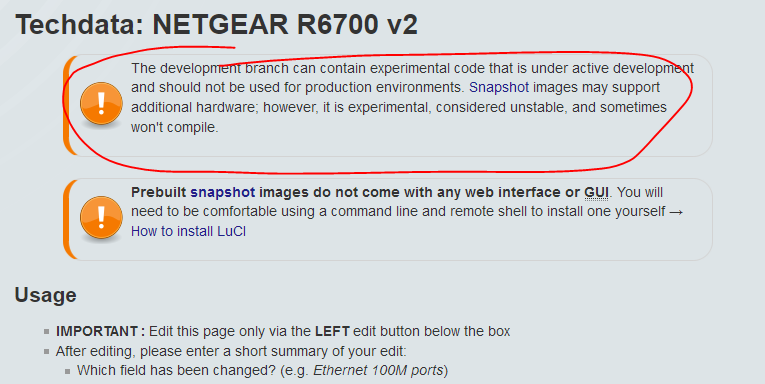 I feel there's a big difference in experimental where some things may not work totally right and completely crashing, bricking, and not working at all possibly. Most of these others work generally fine with minor bugs similar to how a beta build functions and that leads to believe it would somewhat work when you've done that before. That text really doesn't cover just how unstable it could be if you're used to it mostly working even having read that many times, and a new/less-familar user could for sure think it just means a bug or two or a build that isn't fully done yet. A more specific warning about potential bricking and use at own risk plus maybe bold text added could be helpful in that context. It's not that it's ever expected that anything tagged experimental could be perfect but especially in Linux, some people use the rolling or unstable branch and never see a major problem and then potentially expect a similar experience even with that wording on the warning existing. This is of course not the fault of the code being in a testing or unstable state, but making sure as possible that expectations of potential outcomes are as properly managed as possible never hurts. I promise I'm not nitpicking on semantics here. I think it could actually help someone to add just a tiny bit more detail to that.

I wanted to add another dead to this thread.. I bought 2 of the r6700v2 routers to install openwrt on them and start 'playing'.. normally I don't use the images supplied so I build my own and so I did, I built my images with my preferred packages and installed it to the 1rst router... after that came a bootloop... no openwrt recovery, nothing... then found about nmrpflash and tried newest firmware, nothing.. then tried oldest and some in between firmwares.. and nothing.. router will boot to solid amber light, no network, nothing...

A side note is that only the first time nmrpflash installs fast, then it starts to last a lot more from 5min to even 30 or 45 minutes...

Have anybody found a way to recover the device? I still have the 2nd one but I wouldn't even try to flash openwrt to it.

It sounds like you're having an issue with using nmrpflash properly because it should be very quick. Something isn't working right there. Make sure you're definitely flashing stock firmware back and then reboot not just once but again once it's up. This is a command line operation and I'm not sure how comfortable you are there so syntax matters. It doesn't work on Windows currently if you're trying that method either. You need Linux. This can be noted in the GitHub issues for the most recent version.

I would say since there is only a techdata page, and not a device page, that anyone would be reluctant to trust this device will just work.

As for reflashing the device, you can reflash the NAND via hardware means if you have a copy of the original firmware (or possibly the vendor firmware).

I clearly stated before I never expected it to just work, and even acknowledged that betas or unstable versions of software like what this has available have bugs and issues, but there's quite a distance between doing a little configuration or solving a couple of problems and it basically not working at all and you needing to be very lucky to not get a dead brick due to no fault of your own. If it's not expected to work, then I think it shouldn't be listed at all as that implies even a minimal level of function and support. It does have some sort of listing which means it should be expected to do something more than die. I didn't expect it to come with the GUI and everything I wanted in the image. I expected configuration and some bugs, not a completely bricked router and the software to be nonfunctional save a miracle and wasted hours of time no matter what I do because it seems to brick if you breathe wrong at random intervals.

I'm not the only one having this experience and it seems like there isn't any care to do anything to help the situation really except try to blame us for doing something wrong or expecting too much versus trying to solve the problem. I don't think wanting something to do what it says is expecting too much by the way. Either it can't be supported and needs to be delisted to avoid the confusion or someone needs to actually take into account what's been said to fix the fatal problem instead of shoving it off as "well you shouldn't have expected it to work" because that's frankly offensive to any user.

Could you create a device page for the R6700 and document your progress so far? This way others won't fall into the trap you did.

That would be greatly appreciated.

FYI - I have created the skeleton of a devicepage for the R6700 v2:

Please document your findings there.