Traffic priority in nft-qos not effective

I'm using nft-qos and it does pretty well when it comes to splitting the bandwidth, however, I've run into an issue.
Let's say my max bandwidth is 40 Mbps. I would like to be able to have a stable connection when playing online games and still allow others to, for example, watch Netflix. Therefore I put 400 kBps (3.2 Mbps) speed limit on their devices. The problem is that despite this limit, my ping in games constantly jumps between 50-150 ms (where normally it is stable 50 ms). In the realtime rate statistics, I can see that bandwidth usage of the "Netflix devices" is as supposed, topping at 420 kBps (before using nft-qos it my ping was more like (50 - 2000 ms).
Hence, I tried using the traffic priority setting and set it up as follows: 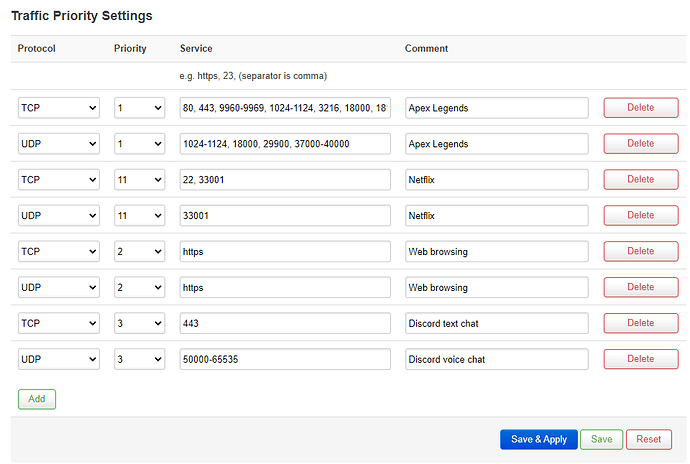 priority960×646 29.8 KB
I'm not sure if I've set it all up properly because it doesn't seem to help at all. And also, is there a way to set priority 1 on the game (Apex Legends in this case) and priority 2 on anything else?
Maybe there are other solutions that would allow my PC to have priority before all other devices?

Note: I'm using a 4G connection and therefore it's not really stable (20 Mbps - 60Mbps). Hence, I don't think that using SQM is a viable solution (is it?)

FYI you have configured the same thing multiple times.
https is tcp/443, not udp though. udp/443 can be used in other things, like OpenVPN.
tcp/22 is SSH, not Netflix. The information you most likely found here concerns partners of Netflix, not end users.
It would make more sense to plan based on the worst case scenario (20Mbps) and allocate the bandwidth according to that. Or get another 4g connection to be dedicated to gaming.

Oh, I was almost certain some of the values I put there were wrong, thanks. Another 4g connection would work that's for sure, but I don't want to spend 2x the amount I'm spending right now... The allocation of bandwidth is static, although other users don't exceed 10 Mbps at any time. This way I should always have 10 Mbps+ for myself, which is more than enough.