After flashing openwrt-19.07.3-ramips-mt76x8-tplink_tl-wr902ac-v3-squashfs-sysupgrade.bin on my TL-WR902AC the router was booted but only power led is on. After pluging it via LAN cable to PC second led (globe symbol) is on. Can't connect to 192.168.1.1 to configure it. I've tried to flash original firmware but after flashing all lights are blinking. I've found similar problem HERE and tried method from last post but stucked at 7th step - the command did nothing. Can't post in that topic because it's closed. What I'm doing wrong? By the way: step 4th ends with router continously blinking its power led. Is it right? 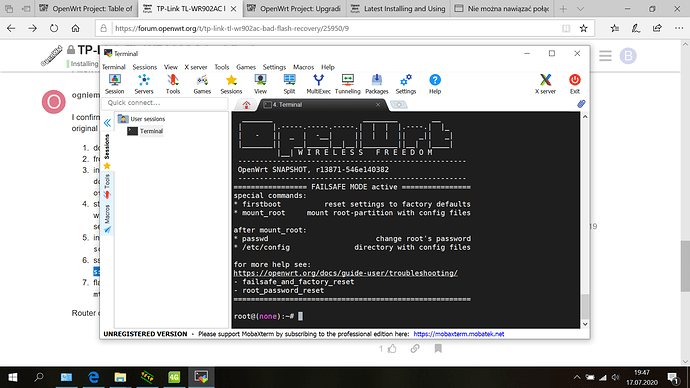 the command in step 7 of the mentioned procedure should be:

of course, the previously prepared firmware file should have been uploaded to /tmp on the router booted in safe mode, before you run the above command