It failed with this error message :

This is the router factory firmware version: 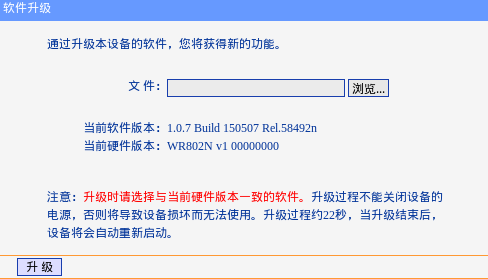 Chinese versions although using same revision number differ heavily than those for EU or UN.
They also use different firmware

The point being that even if the OP could flash LEDE, the 4/32 warning applies.

So it may not be worth pursuing.

Should have made that more clear.

Because the web gui will check RSA instead of MD5,Thanks

Could I flash LEDE by factory web upgrade if it signed with RSA?

It's in the firmware header.

It's not the size of the build that causes the issue...it happens on several other TP-Link router models as well.

One thing you can try is using TFTP.

See this post on the TP-Link forums...it's for a different router, but the principle is the same.

Rename the LEDE binary to wr802nv1_tp_recovery.bin

@jwoods I have try to flash LEDE by TFTP recovery mode, but i have failed.

TP WR802N boot without any TFTP requests to tftp server.

After I rebooted TL-WR802N router, I held its reset button.

Then I try to find TL-WR802N's TFTP request by tcpdump, but there was NO tftp request at all.

TL-WR802N just boot as usual, it only has DHCP request.

After I rebooted TL-WR802N router, I held its reset button.

The router needs to be powered off.

At the same time, turn on the power and hold the reset button for 10 seconds.

chinese u-boot does not have tftp builtin, so your best chance is to use this web exploit https://pastebin.com/0wzMthfr

Don't need an exploit if you set up the TFTP server on the attached computer.

@jwoods I reboot router by unplugging its power line, this should hard reboot it.

I have try a hard reboot with 10s holding reset button. There was still NO any TFTP requests.

I did NOT know how to spilt the kernel and root image from LEDE factory bin file ( dd block size ) .

https://pastebin.com/0wzMthfr2 this post was for TL-WR703N with an openwrt image.

yes for wr703 but it had chinese webgui so i tried it on tl-mr22u and tl-mr13u that also have same interface and it worked. only take care if your factory image is close to 8MB in size this could brick the device because of too low RAM (32MB). better use <4MB image for first flashing or make a modified u-boot that is only 128KB in size and will flash without problems

What are you using for the TFTP server on your computer to upload the firmware to the router?

Did you manage in the end to get Lede/OpenWRT flashed on the Chinese version??

Anyway to get it working over a serial connection? I can get the serial partially working (I can read, but not write).

I have the same issues. U-Boot text portion is garbled, but I have clean text once Linux is loaded (which is too late to get alternate firmware loaded).