"Since ath10k is not OpenWRT-specific, not much can be done to improve it in future releases."
This i don't understand. Has a driver to be maintained by openwrt for it to receive future improvements?

Of course, different chipsets can, and do have different results on CT drivers.

I think my experience versus yours confirms that.

So it's more accurate to say that on "your" chipset (or "certain" chipsets), the CT drivers don't do well.

OpenWRT doesn't drive the development of either ath10k, or ath10k-ct drivers.

Actually, i wasn't even aware that ath10k-ct is openwrt specific.

I added notes to the Wiki page on how to swap drivers: https://openwrt.org/toh/tp-link/archer_c2600_v1#alternative_wifi_module_and_firmware

In my experience with four of those devices it is not immediately obvious which driver performs better. In a heavily crowded area, the non-ct works better, which is the reason I switched that device. The three other devices work well with the candelatech driver. I haven't tried the ct-smallbuffers driver, because I thought it is only for devices with little RAM (which the C2600 has plenty of).

At least i'm glad i'm again able to run the latest openwrt release on my c2600 . When things went bad after initial 21.02 update, i had to revert back to 19.7.8 , simply because the c2600 wasnt usable anymore with wireless constant dropping (especially on 2.4ghz).

this might explain my situation as well. i was having occasional drops on my runt network when it was allowed to run on both the 2.4Ghz and 5Ghz radios. i thought maybe having two SSIDs running on each radio was causing issues and moved the runt to 2.4Ghz only. after doing that, the failures started happening more frequently.

i'm going to test out the non -ct driver on my device and open things back up to both radios to see if that improves the stability. i'll report back here and will update the wiki device page for Turris Omnia if it turns out that this helps.

i'm a big fan of your idea to report this issue upstream. are you willing to do that? https://wireless.wiki.kernel.org/en/users/drivers/ath10k/support

I am indeed willing to do that, but i am unsure if i'm capable or knowledgeable enough to do so. Do you (or anyone else) have an insight of how such reporting works? What is needed (log files (which?), dmesg?, device information?)

I do have a more experience now with running ath10k. It seems 2.4ghz radio is rock solid. But i do , mostly once in an entire evening, see 5ghz wireless dropping (client is an win10 laptop with intel 7260hmw wireless nic). A quick disconnect and reconnect solves the issue , but i didnt have this issue with the ath10k-ct driver.

So now i can choose between the ath10k driver which handles 2,4ghz fine , or the ath10k-ct driver that is more stable with 5ghz.

For now, a single 5ghz disconnect per evening is something for me that is "doable", the frequent 2.4ghz disconnects with the ath10k-ct driver i cant live with (need my wireless radio (which uses 2.4ghz) for sanity reasons

Could it help if i report these issues to the ath10k developers (as suggested) and/or contact candelatech/ath10k-ct developers with these issues? Maybe we can make this a more collective effort, with collecting al relevant data from ath10k and ath10k-ct users and hand these over to the developers?

i think a reasonable place to start is to share some of the same information from this thread (perhaps incl. a link to this thread) on the mailing list for the driver. they will ask follow up questions if they have any.

To be more specific, which driver do you mean, the ath10k or the ath10-ct driver? Both have their strong points and their weaknesses. Would be nice if someone could merge both drivers (and corresponding firmwares) taking the strong and stable 2.4ghz performance of ath10k and the fast and reliable 5ghz-ac from the ath10k-ct driver and candelatech firmware. I am aware that this is no walk in the park, and maybe even impossible.

Knowing that candelatech operates under an qualcomm nda makes things more difficult. I guess qualcomm wont release their firmware under gpl, what would make a huge difference.

Does anyone know if the ath10k and ath10k-ct driver developers are in contact with each other, or do they work completely seperate from each other?

-off topic: in the mean time, i'm looking at what ath11k could possibly give us, and if devices supported under ath11k would be a "better" choice instead of hoping the c2600 one day will run stable on both radio bands.

-off topic 2: after hearing felix fietkau talk very positively about mediatek , i'm trying to find out if there are mediatek based devices that are somehwat comparable in specifications to the c2600 and are available in western europe.

Today i've upgraded to 21.02.2. Seems there has been a lot of development going on. With 30 changes in wireless / common alone, 21.02.2 seems to be a big deal. And even better: after upgrading i've encountered no drops on the 2.4ghz radio. As it was pointed out to me, after upgrading i should be on ath10k-ct again. I'll keep using ath10k-ct if it keeps being this stable. Fingers crossed.

Would i gain anything from switching to ct-smallbuffers?

I have no idea what changed / broke in 21.02 , but it seems that it is now fixed again and ath10k-ct runs pretty solid.

Let's hope ath10k-ct keeps being this stable in the upcoming releases.

i've searched the changelog but couldn't find it

Before doing an upgrade, I run opkg list-installed and save the results.

After the upgrade, I run it again.

I use a diff program (BeyondCompare is my personal preference) to see what's changed, or missing. 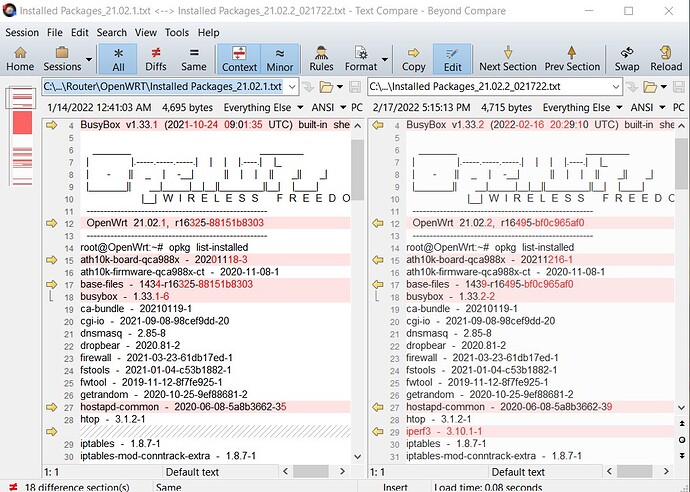 Well, this was fun as long as it lasted.... I'm running 21.02.3 for about a day now. My 2.4ghz internet radio worked flawlessly on 21.02.2, now with the .3 release it play's for about half an hour to an hour, and then completely loses wireless connection. I have to psysically reboot the device, after that it plays fine again for a certain amount of time, before it again loses the wireless connectivity. Going back to 21.02.2 for the time being.

I'm having what it looks like the contrary problem, running 21.02.3.

It looks to me like the 5 GHz WiFi is going down after 1-2 days, without anything shown in the logs, etc., but I can only restore it if I restart both WiFi networks (or reboot the router).

Anyone having the same problem or any hint about how to debug it?

I am also having issues with it recently (since 21.02 actually). Sometimes it just drops internet for some devices (can be wired or wireless) and actually turning on a device with a wired connection recovers the internet connection.