Here are the specs: https://www.tp-link.com/us/home-networking/wifi-router/archer-ax1500/

I was wondering is there anyone working on adding support for this router as it is by far the cheapest 802.11ax router on the market.

At least for me, "I love all the little antennas you can point different ways to help to get connected." characterizes the target market perfectly.

TP-Link? Cheap TP-Link? -- Between the admissions in the FCC consent decree and the decade-old 4/32 crap they continue to pump into the market, no thanks at any price.

TL-WR841 (US$18) and a several more -- worse in other countries. I believe it was in Brazil that they were not only charging a crazy-high price, but deceptively advertising them as "32 mb" storage (bits) rather than the reality that they are effectively unusable 4 MByte devices.

Broadcom's long history of lack of support for open-source development isn't going to be very attractive.

Currently there are zero devices with this SoC listed as supported by OpenWrt.

Some Broadcom SoCs are supported, but you can be pretty sure there's Broadcom wireless connected (or in it) as well - and that's what you need to support. Don't expect much from Broadcom wireless when it comes to Linux.

Qualcomm/Atheros and Mediatek are still the better choices if you want OpenWrt support and reasonable 802.11an/ac wireless drivers. Ath11k (for 802.11ax) is said to be in the works, no idea if Mediatek has a 802.11ax solution ready (and is willing to open source that driver).

As far as OpenWrt support is concerned, the device you're looking at is dead in the water.

Not quite sure if it will make the cut for kernel 5.5, but it's at least on its way (and has been available publicly for almost a year by now)

I was just looking at this device.

Knowing what I know, I think it's unlikely we will ever see OpenWRT support for this. Broadcom doesn't get any love from OpenWRT because the OSS community gets no love from Broadcom.

My recommendation is don't-buy if you ever want OpenWRT support on this device.

Yeah, i'll end up getting a qualcomm based router, will wait until those come down in price though which could take quite a while.

Knowing what I know, I think it's unlikely we will ever see OpenWRT support for this. Broadcom doesn't get any love from OpenWRT because the OSS community gets no love from Broadcom.

My recommendation is don't-buy if you ever want OpenWRT support on this device.

We may want to keep an eye on the TP-Link Archer AX3000 which is $129 at Walmart and seems to be Intel-based.

It is an interesting model.

As far as OpenWrt support is concerned, the device you're looking at is dead in the water.

you can't read or what?

Guys, as you can see, if you extract archer ax10 firmware you will find out that in fact ax10 uses by default a custom build of openwrt made by tp link. sooo any dev here able to make a openwrt release? 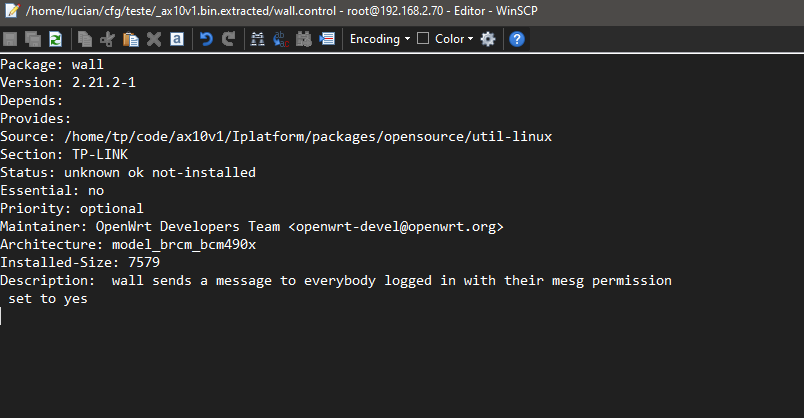 Try grabbing the FOSS tarball TP-Link offers, if you manage to get a hold of it you'll see there's tons of essential stuff (binary blobs) missing.

If it were as easy as 'Oh this device has OpenWrt from five years ago on it' then OpenWrt itself would support lots and lots more devices than it does now.