TL-MR3020. After installing OpenWrt no access to the interface

Hello and greetings to everyone.

I have a router TL-MR3020 (EU) ver: 3.20. I uploaded tplink_tl-mr3020-v3-squashfs-tftp-recovery.bin (from https://downloads.openwrt.org/snapshots/targets/ramips/mt76x8/) using the Tftpd32 program on a Windows 7 computer. It looks like that the installation was successful because the system sees the router and pings it but there is a problem because I can not run any console. LuCI web interface not work and when I try to access via SSH when connecting in SmartTTY it shows the error "Cannot acces .shh directory". I was able to connect via WinSCP 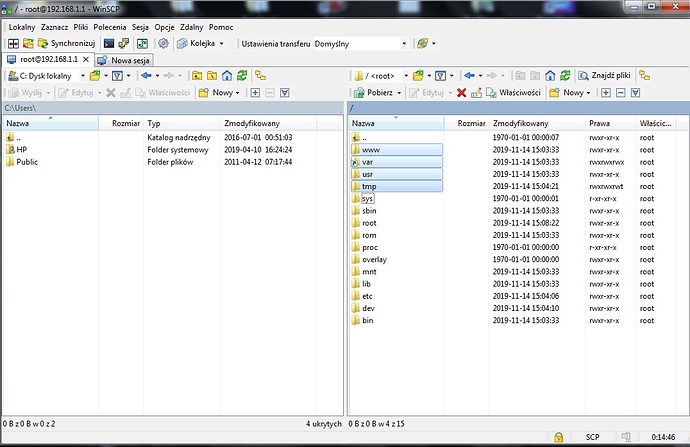 Snapshot builds do not include Luci code. You should be able to ssh in. Well-proven Windows ssh clients include Putty and Tera Term.

@Marcin, welcome to the community!

The message above has some suggestions for Windows based SSH clients, they will probably let you access the router and run a command or two without problems.

However all the Windows programs I did check out did not provide satisfactory results as terminal emulators for me, so I use xterm + OpenSSH personally. Windows programs kinda work, but that's all.

Yes with a late version of Windows 10 you can use Microsoft's CLI ssh, which is a port of OpenSSH.

The main problem with SSH on windows though is lack of satisfactory terminal emulator. So I don't think it's going to help. Out of all terminal emulators I tried, I like Konsole the most, but windows doesn't support it, so I don't use windows

Hi.
Your advice is correct. I was able to connect PuTTY with the router and enable wifi. Thank you.

Assuming you can physically connect to the internet via ethernet, your best bet would be to change the network and wireless settings to give you a wireless LAN + wired WAN.

Also, the MR3020 is going to be short on space -- if you're just looking for LuCI, it will probably fit for 18.06.5. But you won't be able to install any other packages unless you run extroot.

I'm having trouble setting up my internet connection properly. I'm trying to install offline. What do you mean to run extroot?

What do you mean to run extroot?

Forget what I said about extroot -- @tmomas's comment above points out that there is enough flash memory for some additional packages.

Regarding your issue getting it to work with your internet connection -- can you elaborate? Are you comfortable issuing UCI commands (on the MR3020 OpenWrt command line) and/or editing the config files manually (using vi, for example, or copying it to your computer to make changes and then moving it back)?

I can't handle the router configuration. I have access to files on the router through winSCP and can edit them. Via puTTY I have communications via SHH.

Here is a script I have used to setup the network so that the WAN is on ethernet and Wifi is enabled for the LAN. Feel free to edit as you'd like, but fundamentally, you can copy this into a text file and save it, then transfer it to the MR3020 and execute it.

I have internet from a cable TV router but I can't configure it. What is the best way to connect the TL-MR3020 to get an Internet connection and download LuCl?

Take a look at the script I posted previously. It configures the LAN on Wifi using an uncommon network range so that it will be very unlikely to conflict with the network configuration that you'd find on most standard routers. The MR3020 ethernet port then becomes the WAN port.

If you are able to successfully run the script, you can then simply plug the MR3020 into your existing network and it should work. You'll then connect your computer or phone to the MR3020's wifi (which if you just run my script directly will be "MR3020" with a WPA2 passphrase "TL-MR3020"

(You probably have ethernet ports on the back of your existing router -- you can use one of the LAN connections to connect an ethernet cable between that and the MR3020.)

OK, I'm in a dimly-oriented programming. Can you tell me where to upload the script and how to run it?
Should I save it as a * .sh file?

Copy the code into a text file. Save it as a .sh file (maybe set_network.sh)

Copy it to the router via Winscp.

On the router, navigate to where you saved the file and add execute permissions

thank you for your help but I have no way to check your file because the router has broken, the software has leaked and I can't even put it into flash mode