@aparcar I have split up the languages in separate files: https://github.com/mwarning/openwrt-firmware-selector/tree/i18n/www
This should conform to the "JSON i18next" format. Is that you meant? And does OpenWrt has a weblate setup?

It's now possible to translate the firmware wizard over here, the setup is not yet fully finished but it's on a good way.

OpenWrt is translated into 45 languages using Weblate. Join the translation or start translating your own project.

It is my understanding that firmware selector uses DEVICE_MODEL from makefiles and also that there are DEVICE_ALT* variables in case the same device has another name.

However, there are only 3 ALT variables making it possible to have up to 4 names for a single profile. This is an unfortunate limitation. The device I am working on has more names than that (I guess manufacturers just have to make our lives harder, huh?).

It would be great if someone could rewrite the makefiles to use an array instead of hard-coded DEVICE_ALT0_MODEL, DEVICE_ALT1_MODEL, DEVICE_ALT2_MODEL. We could even drop the ALT variables and have DEVICE_MODEL be an array (e.g. comma or semicolon separated values?).

yes, the data comes from the DEVICE_MODEL and DEVICE_ALT* variables. There are only 3 ALT variables as it was deemed enough when they were introduced.

I do not know how hard it is to implement a higher/variable number of variables.
@aparcar any idea?

Having 4 or more should be easy, implanting it as an array… I can look into that at some point, if you feel it worthy please open an issue

Hi, since a RC release has been announced when I am posting:

Hi, The OpenWrt community is proud to announce the first release candidate of the upcoming OpenWrt 22.03 stable version series. It incorporates over 3400 commits since branching the previous OpenWrt 21.02 release and has been under development for about one year. This is just a release candidate and not the final release yet. Download firmware images directly from our download servers: https://downloads.openwrt.org/releases/22.03.0-rc1/ Main changes from OpenWrt 21.02: Firewall4 based on…

It is better to include RC release to this firmware selector (now there are only snapshot and stable releases);

This tool is quite cool but could you please add a package selector too so we can compile with selected packages included? -

add a package selector too so we can compile with selected packages included?

-- select your router, then click on the customize twisty and you can add your packages.
https://chef.libremesh.org/

Cool this one is lit, thanks.

anyone know there are issues with https://firmware-selector.openwrt.org/ ? 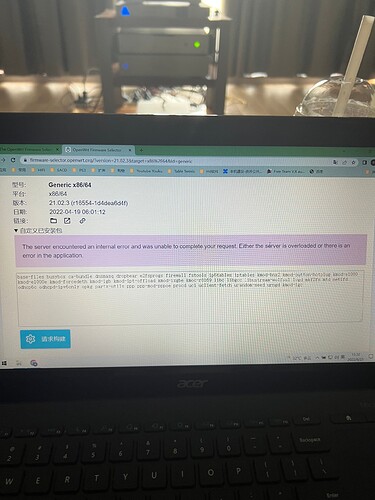 Why hasn't the firmware selector bug been resolved. . . I will wait to download 21.03 with kmod-inc plugin, unfortunately I won't compile, 22.03RC4 doesn't work with shadowsocks, I'm anxious and frustrated

There is always the option to run imagebuilder yourself, locally, and not to depend on donated remote services.

Please advise how to use imagebuilder, I am a novice

Please advise how to use imagebuilder

can we use it on ubuntu in WSL2 in Windows too?

Can images be built using WSL2? For Developers

Is it possible to use Windows' own Subsystem for Linux 2 to build OpenWRT images? I found some discussion on the old forum that refer to WSL1, it seems there were some issues due to the way the file system was handled. Link, if interested WSL2, OTOH, uses an ext4 hard disk container so those issues should be gone. The benefit is that WSL2 is supposed to be faster than regular VMs, and less hassle. Has anybody tried it yet?

Or get a virtual server from one of the big cloud providers, they're usually free, at least for a while.
It's not going to be fast, but I guess you're not in a hurry.