Both previous RCs had issues with the ImageBuilder so custom images wouldn't work, but should be fixed now!

Upgraded a TP-Link RE650 v1 and a GL-iNet AR750S (NOR) from rc2 to rc3. First time I've used libremesh - included packages for diffutils, sqm and relayd. No problems so far (~30 mins). Many thanks.

Worked great to grab rc3 on my WRT32X thanks, this is all I use now for firmwares.

@aparcar is see you are injecting ucert into peoples images

I'm adding ucert and luci as default packages, which are normally not included (in snapshot builds). I'm using the server for my own devices as well and they all trust the ASU build key. This is a security improvement from my point of view but since people may don't want this I'm already thinking on how to make it optional.

No, ucert is only activate if you actively require key checking via an extra env variable.

It shows you the list of installed packages which I'd consider as "disclosure".

Overall, please use the other thread for such questions, this thread is meant for the firmware wizard which only allows to download stock images.

Update: I modified ASU to no longer add the public CA key and also removed ucert from the default package selection. This weakens the upgrade security but removes any "hidden" modifications.

Whoever want's security on the upgrade server should install the two packages auc and ucert, the former allows custom image requests from a running device and the latter verifies them.

Thanks for the update,working fine for me without any problems i tried it yesterday

Great work on this simple tool and thanks.

I noticed that if I switch versions after previously entering/selecting the model number, the page does not automatically refresh with links to the images.

You have to re-enter/select the model number again for the page to refresh.

I never saw those other 2 folders except the master in the file system, the other 2 seem to be hidden.
I would find it helpful, if the hidden-flag gets removed in the filesystem.

I have not been able to reproduce this. Can you provide an concrete example? Thanks!

@aparcar is this something you can help with?

I get your point.
But it does not make sense to show the additional snapshots in the firmware selector and hide them in the downloads-page, where tech-guys hang around. 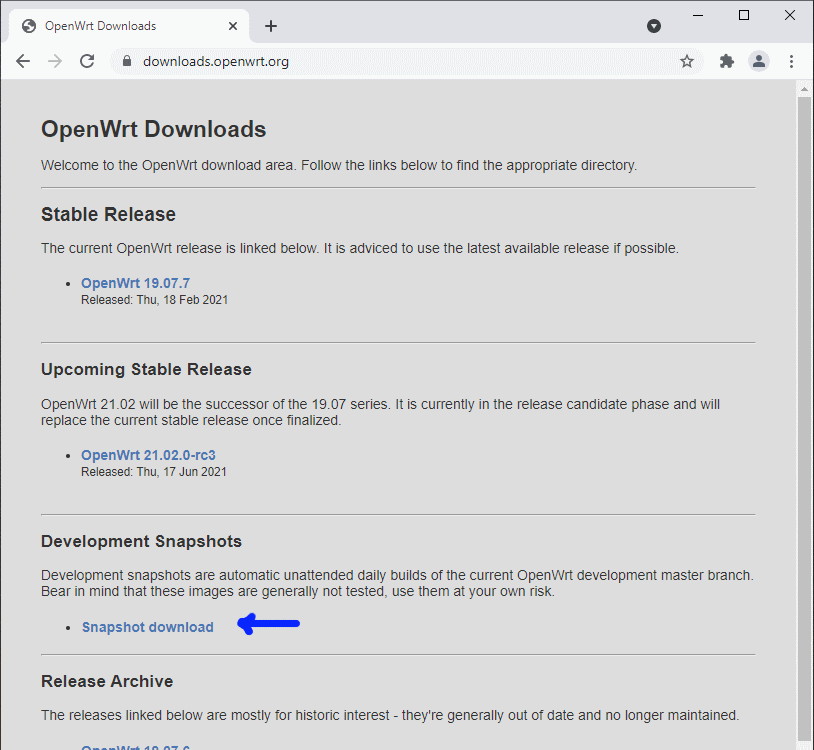 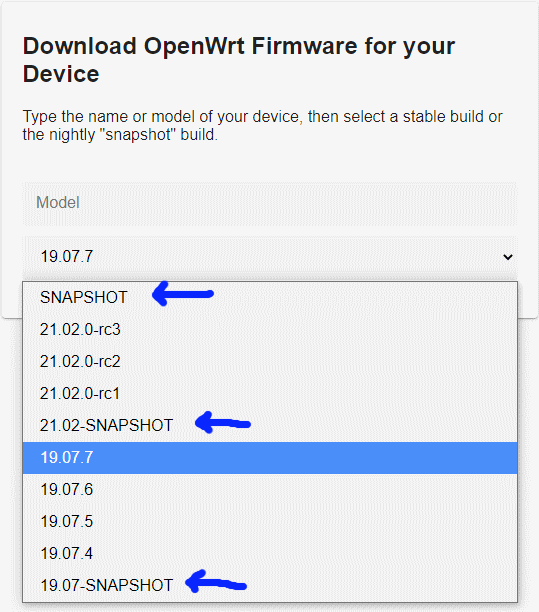 As A tech savy person I really like that those additional snapshot builds exist and I actually missed that they existed. I also think the previous and current snapshot are less dangerous to use than the upcoming snapshot (although all 3 are not meant for freshmans).

To address your concerns, once the new firmware selector is meant to go productive, I would rather recommend to simplify the regular download page on "https://openwrt.org/downloads", such that there are only 2 links left on that page, to make it easier to use for non-IT-experts:

@jow what is your opinion here? Should we show those pre-releases?

No, they shouldn’t be shown in a simple firmware selector.

Thanks for the timely response. I'll update the version file

@mwarning do you mind modifying the collect.py script that it ignores all 'pre-releases' but SNAPSHOTS?

Hi! Is chef.libremesh.org 's build server down? Attended sysupgrade seems to not be working.