@blocktrron Did you get the serial console of the fb 7530 fully working. I am able to get data from the fritzbox, but cannot send anything to it. I've already tried an 10k pull-up on the rx line without success. Is there anything else to equip apart from the 4-pin-header?

The Serial console works for me without further modifications in both directions.

Are you connecting with the mapping described in the patch?

Yes, I'm using this mapping and I also can the data on the rx-pin with my oscilloscope. My thought was now that perhaps still somewhere something must be equipped.

@blocktrron Can you please have a look at your pcb if the marked pads are also open on yours?
The route from "my" Rx-Pin seems to end there. 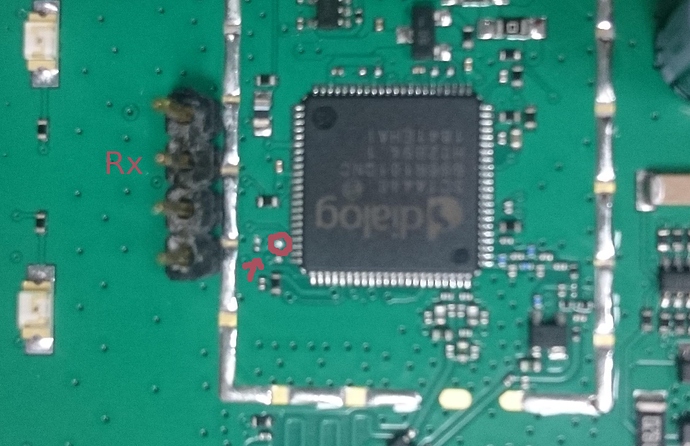 I can have a look later this week. However, judging fro mthe pictures here suggests this is fine: https://boxmatrix.info/wiki/FRITZ!Box_7530

Other thought - which USB --> UART adapter are you using? I've found the cheap FTDI knockoffs not very reliable TX-wise in many cases - I've had much better experiences with a CP2102 based adapter.

Hmm... the board looks a little bit different than mine.

Is this device NEVER going to get a stable release due to DECT being impossible to support?

If so that seems an interesting stipulation as its been FAR more stable than my Archer C7 v2 was and that WAS in stable, when this is not.

The 7530 will be supported in the upcoming OpenWrt 19.07.0 release (and already is in snapshots), be aware that DECT support is unlikely to ever materialize and that the xDSL modem won't work for the time being either (this is more likely to become supported in the future than DECT, but it's also far from a done deal and will require significant efforts to get working - which might not happen either).

changed 12 files with 642 additions and 7 deletions.

The 4040 might be a better option for running OpenWrt now, as it's basically the same hardware (for just over half the price of the 7530) - except for the functionality (xDSL modem/ DECT/ FXS) not supported in OpenWrt (yet) anyways.

That's good to know, I was just confused what qualifies a device to make the move over as its been in snapshots for quite some time now and performing great. (I use it most as an AP only but have used it as a 4G router too to link my phone into my pfSense router)

Is it possible to change back to AVM-stock firmware? The guy in this post:

Hello everyone, I have installed OpenWrt on a FritzBox 7530 following instructions in this topic, and it seems to work fine, but I was wondering if there is a way to restore the original firmware. I have tried to use AVM’s firmware recover tool, but it doesn’t seem to work now that OpenWrt is installed. It seems to detect the FritzBox and displays: Hardware: FRITZ!Box 7530 Bootstrap: 4540 Firmware: 164.07.03 But then it displays Error: 'Incompatible memory layout' and refuses to continue. T…

Could it be it won't work with new FritzOS 7.12?
when i try to write uboot.bin to /dev/uboot0, it says this file doesn't exists. A ls -l into /dev:

OK, last post solved. Downloaded newest snapshot and installation was without problems. Also seems i mad a mistake, the write has to be to uboot0, not /dev/uboot0.

Is it possible to change back to AVM-stock firmware? The guy in this post:
Restore FritzBox 7530 original firmware

I had the same problems. First the message 'Incompatible memory layout'. At some point I tried to load the image with eva_to_memory. That does not work either. So back to the AVM recovery tool. All at once mdt0 was flashed. Another try has flashed mtd1. So I've run the recovery tool several times it worked.

But hey ... I'll be back to OpenWrt immediately;)

Thank you. I want to know it only to be safe i could go back if i need the box' dsl-part. In the moment i'm happy with it under open-wrt. Use it as firewall behind a fritzbox 7390 for a separate network.

What's the current state of the VDSL modem?
Would it be possible to use the binary AVM VRX518 kernel module against the OpenWRT kernel for now?

I tried the repository linked in my previous message and I can confirm that the dsl part is half working. The VRX518 gets the signal, but no data is received. I digged into the vrx518_tc_drv but not enough to find the culprit. I think that the problem is caused by some interrupts not firing when the dsl chip receives packets. Probably somewhere in the the sw_plat.c file connected to the rx section... @sch-m Do you have any idea about it? P.s. Just for clarification, i think that ltq-vdsl-app cr…

What is the procedure to reset to openwrt default config?

Hi to every developer devote to this project. It's already september, i'm curious about how VRX518 supported now? Does it work now with the newest version 19.07.3? Thanks for kindness reply.

Hi to every developer devote to this project. It's already january, i'm curious about how VRX518 supported now? Does it work now with the newest version 19.07.6? Thanks for kindness reply.

So to everyone who'd like to see a working modem on the 7530:

Amazing progress! Good to see people more knowledgable than myself are working on this! Just checked out the Planet VC-231G. Seems like it's around 100€ and I'm sure there are enough people in here happy to donate a bit. I'd chip in 30€ as a start. @blogic do you live in Europe or the US or somewhere else? Would you be interested in something like this? Do you have a Patreon / Github (Sponsors) Account?

Things are happening! Maybe some of you would also help with a donation. It looks like promising progress and don't we all want a capable OpenWRT router with a working modem?