There is a private discussion about possibilities of some sort of crowdfunding to allow the community to pay back the core team for their expenses, and fund the project going forward, but there is no public news yet.

I would like to suggest that the team consider using either LiberaPay or OpenCollective. As much as I love LiberaPay, using OpenCollective would likely inspire more people to donate and generally have less friction as the spending is transparent. Please consider doing this sooner than later; I strongly believe the routers/components OpenWrt supports could be expanded a great deal if OpenWrt allowed people like myself to do things like automatic reoccurring donations.

I strongly believe the routers/components OpenWrt supports could be expanded a great deal if OpenWrt allowed people like myself to do things like automatic reoccurring donations.

AFAIK the constraint is available time (of current developers) or (missing additional) manpower, not money.

@jow: Donations are a recurring topic. What do you think of the proposal to allow donations via OpenCollective?

I don't want to distract too miuch from the topic (OpenCollective), but since you proposed this also, I'd like to add a short excursion:

If someone objects PayPal and Patreon due to their proprietary nature, why not to create a Liberapay account? I think a project such as OpenWRT needs a way to accept donations.

I'd be in favor for LiberaPay as well, they support organizations therefore fitting the OpenWrt status. They had some payment provider trouble lately but just recently fixed it cooperating with a new provider, so it should be usable again.

And one downside (is this still true?):

Librapay would be great if it wasn't for the fact that they require recurring donations.

I don't want to distract too miuch from the topic (OpenCollective), but since you proposed this also, I'd like to add a short excursion

Totally fine, I updated the title to be less definitive and more inclusive. If more people want to donate via LiberaPay then it makes sense to use LiberaPay. I only suggested OpenCollective because of the budgeting transparency which is why in part a few OS I know like Qubes (and recently Manjaro and Endeavour) use it.

LiberaPay does not technically require you to make recurring donations, although I can certainly understand why someone might think that given the UX exclusively mentions reoccurring payments. Basically after however long you set the reoccurring amount (say 3 months), you'll get an email that looks like this which requires action on your part to actually renew: 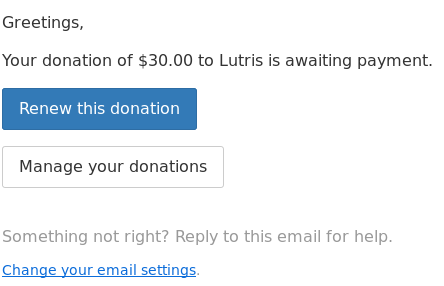 I once let it sit for an extra month by accident w/o consequence. However, they do strongly hint at LiberaPay's purpose being long term, not short term:

Can I make a one-time donation?

Liberapay is designed for long-term stable funding and only supports recurring gifts.

It's worth noting in addition to supporting one off donations, OpenCollective doesn't require intervention every payment cycle for it to go through, but it's not FOSS like LiberaPay is.

Edit: And for what it's worth the money doesn't have to be routers/components if the bottleneck is time constraints; money could just as easily be spent on bountifying things that fall outside the interest of the core team, but should be done, infrastructure so devs aren't paying out of pocket anymore, or modernizing the project landing page, etc.... ultimately whatever is best for the project

What about https://www.bountysource.com/teams/openwrt/issues?tracker_ids=10101609 should we recycle it as a way that doesn't involves any tax issues to OpenWrt?

Are there any updates in regard to donation options?
I would like to support the project with recurring payments, but am not particularly fond of PayPal. Is it still the only available option?