Dear OpenWrt devs,
I would like to suggest adding a conformation button when someone click on the stop button under interfaces in Luci.I actually have a story, where this would have prevented me from being locked out:
I accidentally hit stop instead of edit ad the interface went down immediately and blocked me from remotely accessing the device until I had asked someone t reboot it.

Stopping an interface is a valid configuration choice (and for some users that can be very important, think about VPN on/ off, temporarily disabling a single VLAN, etc.), so there's no point preventing that - it just does what it claims to do, nothing preventing you from shooting yourself into the foot.

Recent versions do this: 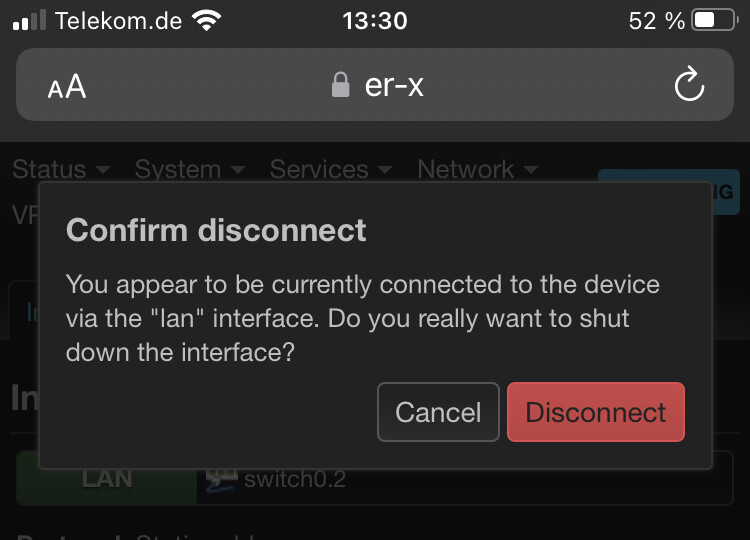 It is not bullet proof though and certain complex configurations prevent the system from detecting the inbound interface you‘re connected with.

I am not saying that it is a valid choice, however when you are in the interface overview and accidentally hit the stop button it will go down without any further conformation. Both edit and stop are close to each other, sowhen you are getting sleepy because it is 2am, it can happen, that you miss the edit button and accidentality click on stop.

@jow I haven#t seen this before. In my case I was connected via vpn and anciently stopped the wan interface instead of editing it. Not sure if that logic is only in-build for the lan interface?

Not sure if that logic is only in-build for the lan interface?

No the logic is generic, but it might not be able to handle complex, layered interface situations (ingress interface is vpn, but transport connection wan).

Okay, in these cases a general warning/confirmation message might be helpful.

Agree, especially if it can be made optional