First of all, this is ethical hacking, not trying to violate any copyright or should be considered disrespectful to @hackpascal, the recovery is great, but he chose to not disclose the source code, that's not really a problem until you realize the web interface is in Chinese and you can do nothing about it.

My only intention with this was to find out how to translate the interface of this great bootloader, not to steal any intellectual property!

The space is not really problem, the're only a few strings, would need 1-2KB more at most for english translation.

It has some checks but are easy to bypass.
The recovery is actually a two-stage loader, the first stage checks and unpacks the LZMA-compressed data to the RAM, then boots it, and that's the actual code running the recovery.

- Run binwalk on it, keep an eye for lzma compressed data, note down the decimal offset:

The data is now extracted, there're no checksums for the html, open the file unpacked_data with any editor.
You'll see the HTML code everywhere at about 3/4th of the file, can me modified pretty much as needed as long as the sections positions are kept.
Remember to set encoding as UTF-8 or the chinese chars will look like garbage data.

Each code section starts with a NULL char and '<'(<div>, <html>, etc ) , so if you search the hex 00 ·3C you'll find them quick.
You must ensure the NULL char stays in the same place, so after modifying each section adjust by adding/removing spaces. 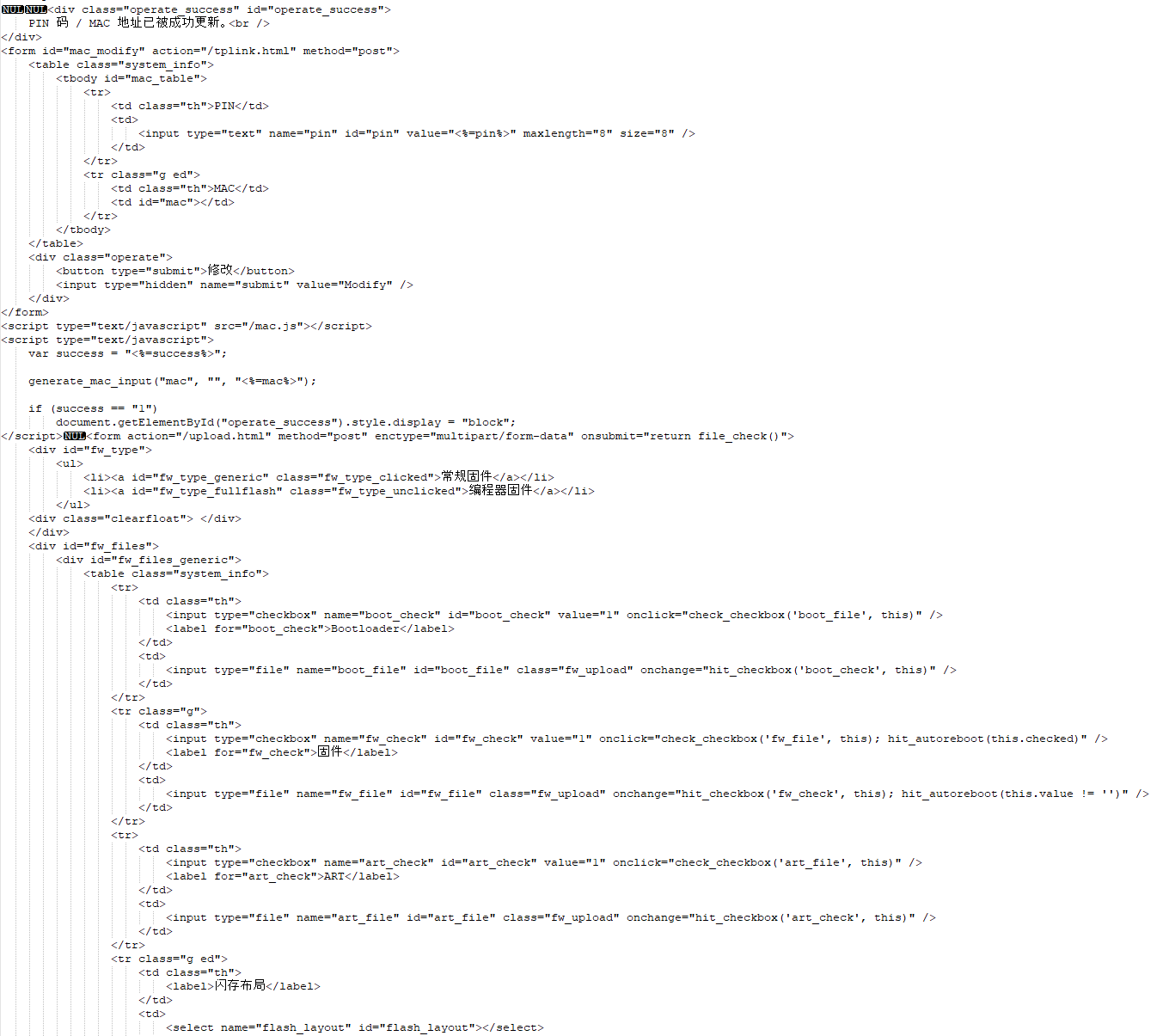 The easy way is to only modify one section at a time, save the file and compare the bytes, removing or adding the said spaces until it matches the original size.

Then there's a harder section with constants and strings, some parts of the web interface use it.<br
It's more tedious because they can't extended easily, you must modify them carefully to avoid causing havoc.

They're single strings separated by null chars, so you can slightly extend them if there's at least a null char between the next string.
Because the original text is Chinese, it uses UTF-8, it takes 2-3 bytes per character, so you have a lot of space when writing normal ASCII, most of the time you'll have so much space left that part of the old string remains, fill with null chars (00) until reaching the next existing null char in the string table.

HxD doesn't support UTF-8, so I opened the file in Notepad++ to find the sections easier, but modified in the hex editor: 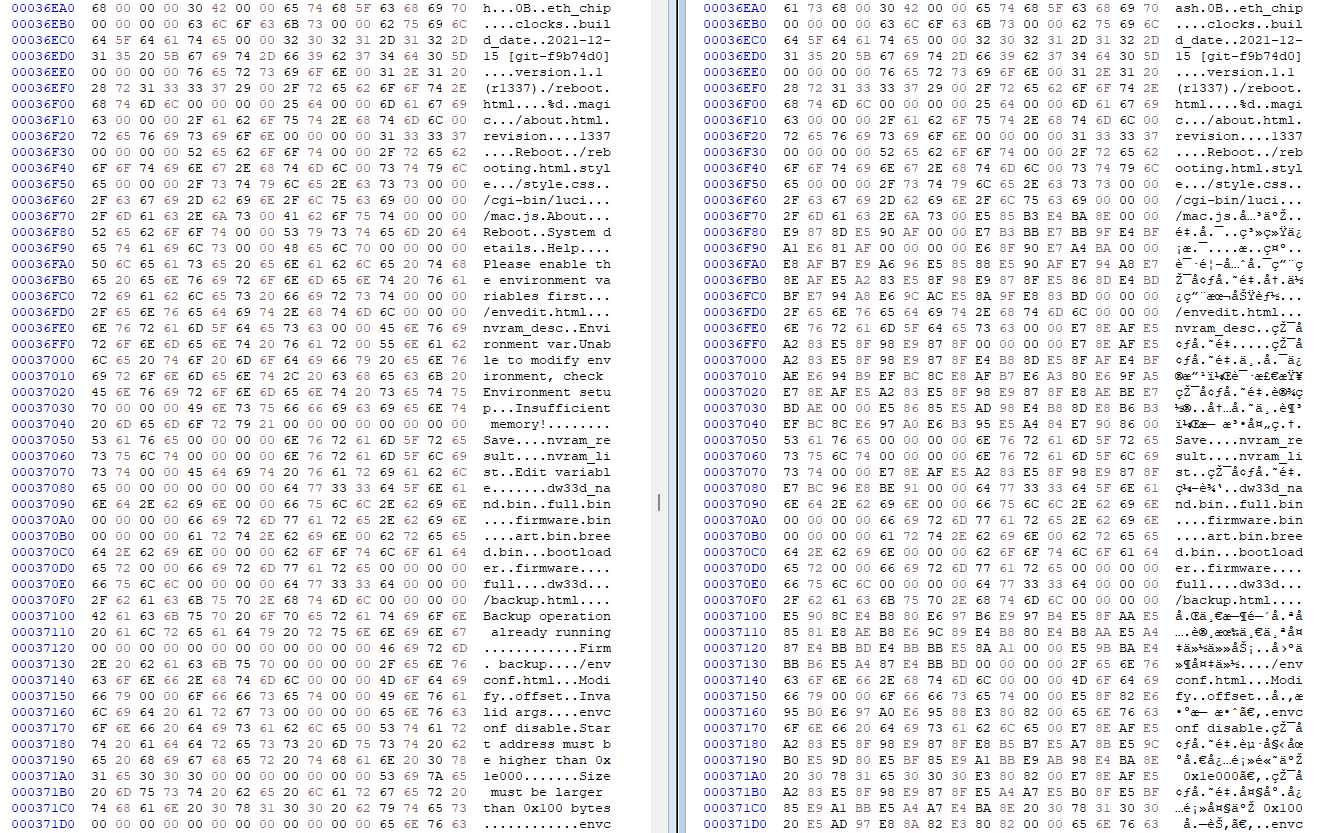 Remember to use the SDK version, normal version lacks these switches.
Get the parameters you got from lzmainfo, we'll use them to repack the file.
The -d option is the number of bits (32MB = 2^25, so -d 25)
Note down the output size!

Modify these bytes to match the new data and save the file.
Wrong data size will cause the bootloader to complain with "Bootloader data is corrupted!" error.

Upload the image and done!

This is not translated by google!


Now the details are known, it shouldn't be hard for the community to modify the bootloaders, perhabs making a github project with them.

Pages are almost identical, I translated Breed for AR9331 in 2 hours.

It's definitely much easier to edit with Notepad++, but be careful!

What's this utter crap forum system? I can't edit the first post anymore after a while?
So how am I'm going to edit small bugs or updating the links?
Yeah, keep adding messages, the people will read the first post and keep reading when something breaks or doesn't work

Does answering lock the messages? I tried to delete the messages but they're still in the history, not liking this privacy assault, I should have rights to fullt remove a message I made!
I'm starting to hate this modern forum system...

Well, anyways.
The lzma size isn't critical, as long as it's higher than the original value it will work!
Also the ar9331 build doesn't work with large openwrt builds, I guess something is being overlapped in memory.
For those with this same issue, use breed-ar9331-wr710n_wr720n, works well, I also translated it and it's in the Drive folder.
Edit: Breed for ar9331 breaks large Openwrt images no matter de what, it booted but then Openwrt wqs missing a lot of files and not working correctly.
Not a bug caused by me, unmodified boot does the same.
When flashing pepe2k it worked, flashing breed broke it, the firmware partition where unaffected si It must be a issue with hardware configuration or crashing (overlapping)memory zones, use pepe2k!
However it's doing great with the AR7241.

@tmomas Can you help out here?