VoIP takes ~ 100 Kbps per direction and cake's 1/4 of the total for the highest tin will give sufficient bandwidth for a single VoIP flow down to a net 400 Kbps link. And that tier is sufficiently prioritized to actually give ViOP packets a short circuit!.

the inter-arrival time for voip packets is 20ms.

That doesn't really matter that much as it is IMHO well within scope for a normal de-jitter buffer. And any service running over the open internet without sufficient jitter resistance is really asking for it...
I have been using VoIP over a 6/1Mbps ADSL link SQM shaped to ~5/0.9 and what could I say/sing:

99 problems but the VoIP ain't one

But as my reaction time is already on the high end for checkers, so I never tested reaction-gated on-line gaming over that link.

That impression is hard to shake, is it?

True that jitter buffers will help a lot, but then if they're too big the audio is fine but the conversation sucks "no you go ahead, no I'm ok, you go ahead". My impression is about 60ms of jitter buffer is the max for comfortable VOIP given the existing delays in the other parts of the system already.

Then add that you have a family of say 4 (or a small business) and do business conference calls, and want 100% clarity when there are a total of up to say 6 VOIP streams going...

(1500+250*3*6)*8/60 = 800kbps, but again you want less than 1% packet loss... and here you have up to 6*3 = 18 packet standing queue for the VOIP stream while only 1 packet standing queue for the bulk upload... so really I still think anyone who does more than just 1 VOIP stream on a network where people might load the Netflix front page, which tries to grab multiple video previews at once, really wants 1500Kbps to 3000kbps upstream.

If you figure that the queue system will keep 99.7% of the time less than 3 bulk packets ahead of your batch of voip, then for ONE voip stream to have very good audio with a 60ms jitter buffer we need:

It's really that requirement for better than 99%tile reliability that hurts.

(But notice, this is consistent with your 1 voip stream clarity at 900kbps upload. so the numbers make sense at first glance).

True that jitter buffers will help a lot, but then if they're too big the audio is fine but the conversation sucks "no you go ahead, no I'm ok, you go ahead". My impression is about 60ms of jitter buffer is the max for comfortable VOIP given the existing delays in the other parts of the system already.

Yeah, the acceptable numbers obviously depend on things like total RTT of the call (which seeing how ISPs occasionally route traffic can be quite unexpected).

I guess maybe it's ok so long as the queue system sufficiently avoids droppping packets out of the standing queue of VOIP. In general VOIP suffers pretty badly at about 1% packet loss, so we need 99% of the time this happens.

This is where CoDel works quite will with its interval it effortlessly absorbs small bursts without switching to drops, but it still reigns in wildly unresponsive flows eventually (cake's inbuilt blue component is a lot better at the reigning in part).

Then add that you have a family of say 4 (or a small business) and do business conference calls, and want 100% clarity when there are a total of up to say 6 VOIP streams going...

Well, my VoIP provider only allows two concurrent calls with my current plan (one in and one out

) and my old one (while still at 6/1 Mbps ADSL) allowed up to three (but with just one phone we never used more than one anyway).

Except fq_codel or cake will treat the 6 VoIP flows a six flows with their independent intervals, that helps a lot and VoIP traffic being paced naturally has a decent chance of being treated as sparse.

so really I still think anyone who does more than just 1 VOIP stream on a network where people might load the Netflix front page, which tries to grab multiple video previews at once, really wants 1500Kbps to 3000kbps upstream.

That or an ISP who special cases its own VoIP packets on ingress... that can allow single stream VoIP down to ridiculous low rates, like 385/50 (with shitty codes). I note that ADSL actually allows to high priority ATM cells to interleave or bypass lower priority cells, with cells measuring 53 bytes, that results in much less serialization issue even if a 1500 full MTU packet sits before our VoIP packet in the modem's buffers. And PTM as used in VDSL2 also allows preempting ethernet frames to expedite highe priority data, but I am not sure that this functionality exists outside of the spec documents...

(But notice, this is consistent with your 1 voip stream clarity at 900kbps upload. so the numbers make sense at first glance).

As I said with a little help of the ISP one can push the minimal required rates for acceptable single stream VoIP down a bit more, but that essentially requires to not run one's own traffic shaper (at least not for VoIP packets)

No doubt, the ISP has an easier job of it all with ability to prioritize their own voip. Used to drive me crazy on a Spectrum DOCSIS line... I knew I had sufficient upstream in theory but I was pretty sure that my voip packets which were going to an internet voip provider were getting dropped by the ISP during high traffic times. I would see 4% packet loss...

The solution was to switch to GigE from ATT

These days with COVID everyone doing zoom calls etc, it would not be insane to see 20Mbps up + down of interactive traffic for a family of 4. Video is more packet drop tolerant though. Anyway I think we can summarize as follows:

Thanks for all your help and patience so far with me.

Somebody advised I should increase the maximum number of connections from 16384 as my hardware is more than capable, how do I do this?

Second, been reading around here and I've followed the instructions here: How to make ethtool setting persistent on br-lan. Apparently these interruptions can also cause lag spikes on Intel NICs, of which I am using in my X86 box.

What else can I do to optimise this? I read something here about distributing IRQs: [SOLVED] Router (Netgear R7800) introduced latency spikes >100ms. Not sure how I do this, will this also optimise performance?

Perhaps I should investigate doing this on my X86 box?

How much bandwidth are you shaping again? All of that was to shape a gigabit fiber while serving NFS and running a squid proxy. For regular routing of less than say 500Mbps symmetric you should be good to go out of the box.

start with your x86 out of the box, just configure SQM and see how it goes. You don't mention what kind of traffic you are interested in here. Are you doing multiple VOIP calls at once, or lots of video chats, or playing e-sports games for a living or what?

Lots of video chats and calls over WhatsApp, etc.

I use Zoom for work which I have found impacted by poor latency, especially when using video.

@dlakelan I hope you can help me configure the priority system with diffserv5, I believe you have experience of this?

All I want to do is put torrents in low priority so they don't make the Internet slow when I have a large download going on.

diffserv5 is some special thing, but diffserv4 is standard.

Your router will be wired correct? So suppose you have eth0 on LAN and eth1 on WAN. You should put SQM with egress control (Upload direction) only on each one. Make upload of the WAN port be your upstream ISP speed (7Mbps) , make upload of the LAN port be your downstream speed (50Mbps). If you do that, and you set your torrent client to use a consistent port, you can use a simple iptables rule to tag packets CS1 and diffserv will put them in the bulk tin.

I'll get you that rule later today. First work on this.

You're very kind to spend so much time helping me understand

So @dlakelan haven't turned SQM back on yet but already seeing these random ping spikes when the network is quiet.

Spike up to 60ms and everyone is asleep, network was quiet then, so I thought.

And I had graphs running, so I had a look: 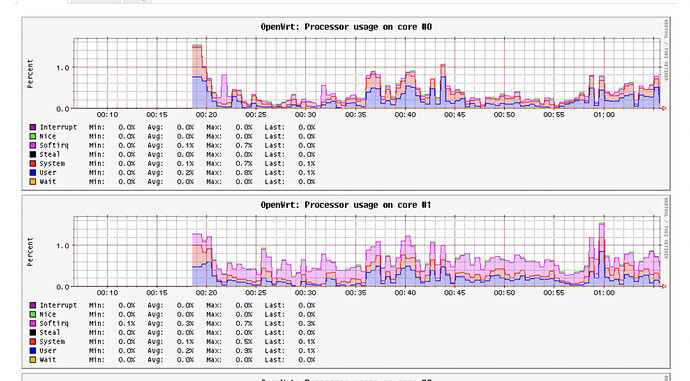 CPU usage spike on this time! But I can't see what, this must be the cause of my problems.

CPU usage spike on this time!

I fear that display is far too coarse to see shor/t spikes, but 1.5% losd really is not much... But again the temporal resolution of the plot is too coarse to detect say a 60ms latecy spike, as you would expect that a CPU load spike of 60ms would be sufgicient, but with roughly one data point ber minute that will not be all that prominent if thete was no other load during that time. BTW, the probes that luci app statistics uses can themselves cause short, but cyclic load spikes.

Understood. I am almost certain these spikes are ISP congestion as you and @dlakelan initially suspected.

I have reported it to my ISP.

i'm confused where are you place this script ??

I am back again.

I am almost certain this issue is caused by torrents and the amount of connections they use, is this fixable @moeller0?