I've just started using OpenWRT. I've used it years ago, but I have an old router that I'm playing around with right now. So I'm not very knowledgeable. You could say that I'm new to OpenWRT, but I'm not new to Linux. Right now, I'm trying to setup an old Archer C7 as an rtl_tcp server. In order to do this, I need to forward port 1234. However, for some reason it's not being forwarded. I've connected the router to my main router as a client, and I've given it it's own subnet. I've also forwarded ports 22 and 80, in order to get luci and ssh access. They work perfectly fine. It also unexpectedly works as a repeater. However, I cannot use it for it's intended purpose, as I've said port 1234 is,, for some reason not open. To me, I do not understand this and it doesn't make sense. Why would ports 80 and 22 work, but 1234 doesn't? I've also tried forwarding a few random ports. They did not work either. Then, I've tried disabling 22 and 80. When I did, they indeed stopped working. But for some reason, I can't get anything besides 22 and 80. Any ideas? I'll link to some screenshots. Thanks. 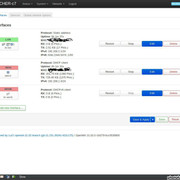 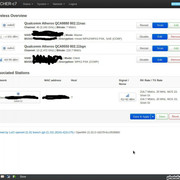 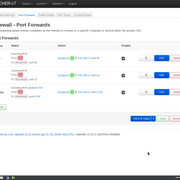 There are no services running on port 1234 by default on the router.

In your screenshots, you are setting up forwards to the router itself... normally traffic destined for the router itself from the WAN would be handled by traffic rules rather than port forwards. However, this does work, provided that there is a service listening (i.e. http on port 80, ssh on port 22). But, as stated earlier, you probably don't have a service listening on port 1234, so it will get no response.

That being said, you should never expose the router's ssh and web to the internet. It is okay if the WAN is actually connected to your trusted LAN as it is in your case now, but do not forward those ports from your upstream router to the OpenWrt router, since exposing the web/ssh interfaces is bad practice for security. And if/when you setup your OpenWrt router as your main router, make sure these ports are not open.

I see. Yeah I'll never forward those to the actual internet, I just wanted them forwarded to my 192.168.1.1 subnet for management because the router is going to be placed in my shed. I've added a traffic rule for port 1234. Then I've tried starting rtl_tcp on the defualt port. Right now it's listening on 192.168.1.3:1234. However, according to netcat, the router isn't responding on port 1234 and I can't connect with gqrx.