Shortly after a reboot, the SSH sessions freeze. At that point, I cannot establish any new SSH logins. This occurs within a few minutes of a reboot, or perhaps as long as 20 minutes. This is repeatable. (This also happened with -rc4 - I updated to -rc6 before reporting the problem.)

A reboot clears up the SSH problem - I can log in as expected (for a while). In the meantime, even when the SSH process is frozen, the LuCI GUI works as expected, and the router passes traffic normally.

Update: My current test is to ssh into the router and run htop. The Uptime: value shows how long the SSH session runs before freezing...

What other troubleshooting information could I provide? Thanks.

Okay, finally! So, I'm not having issues to establish sessions with the router, however, we are experiencing many issues with my SSH sessions to my rsync.net backup server and my partner cannot utilise SecureLink to tunnel remote Citrix session for work.
We had to revert back to 22.02.1 during our workdays. Initially I thought it was just SecureLink's version, but nope, so I'm glad to read that someone else is facing the same issues.

Question: Is your issue only connecting to your Belking RT3200 or with remote sessions too?

At this point, I'm only seeing problems with a loss of SSH access, so I cannot speak to your rsync.net / SecureLink question.

Interestingly, I am running two rt3200 at two different locations on RC5, and I don't have this issue. Is RC5 fine for you as well?

I rebooted the router and ssh'd in briefly when the router started up to ensure it worked. I then logged out and left the router alone, using the wifi for light work on the internet. The router ran without incident overnight.

I checked back a few minutes ago, and htop had frozen with uptime of 23:28 - about 38 minutes after the start of the SSH session. At that time, I was not able to re-establish another new SSH session from my laptop.

So my current test is to SSH in, and let htop run 'til it fails. What do you see if you try this? Thanks.

Is there anything special in your build, firewall or such ?

I am just wondering about any possible peculiarities, as others have not reported anything similar to my knowledge. If there would be a widely spread bug since 22.03.0-rc4, I would expect more people to have got hit by now.

I tried SSHing into my own RT3200 build after 5 days of uptime, and it worked ok.
I rebooted it, SSHed in and started htop. Let's see what happens. 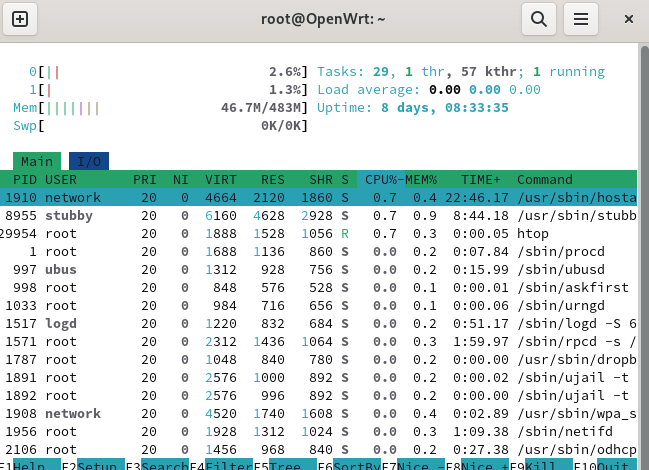 I have had an SSH session with htop running open for 49 minutes with problems, so far...
(wired connection from PC)

I need to shutdown my PC now, but it hasn't locked up. The difference in uptime of this screenshot vs the first shows it's been running for over 2 hours, so I am not experiencing any stability issues with SSH. 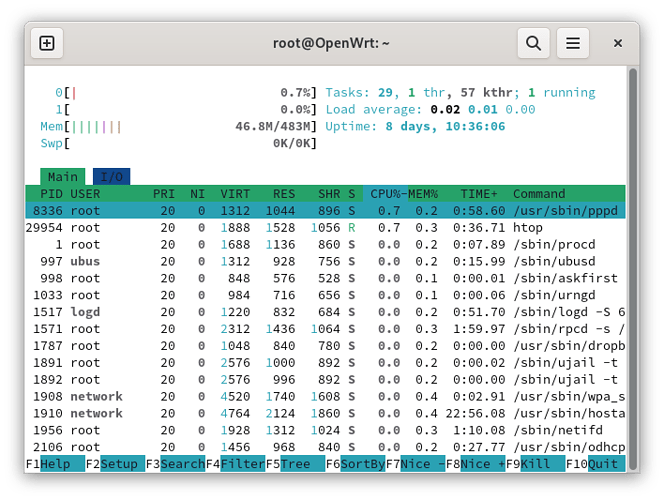 Is SSH inaccessible or just really slow? For me with my rt3200's over WDS just went really slow.

Is there anything special in your build, firewall or such ?

No - nothing special installed. I installed RC6 and then added the packages below.

NB: CAKE-autorate service is disabled and not started.

Is SSH inaccessible or just really slow? For me with my rt3200's over WDS just went really slow.

It's inaccessible. I walk away from htop and a while later it's frozen. Attempts to begin a new SSH session time out after 30-60 seconds.

Backports upstream fix from 5.19 lockdep complains use of uninitialized spinloc…k at ieee80211_do_stop() [1], for commit f856373e2f31ffd3 ("wifi: mac80211: do not wake queues on a vif that is being stopped") guards clear_bit() using fq.lock even before fq_init() from ieee80211_txq_setup_flows() initializes this spinlock. According to discussion [2], Toke was not happy with expanding usage of fq.lock. Since __ieee80211_wake_txqs() is called under RCU read lock, we can instead use synchronize_rcu() for flushing ieee80211_wake_txqs(). Signed-off-by: Koen Vandeputte <koen.vandeputte@ncentric.com>

Why? I don't properly understand it yet, but give it a go.

Are you experiencing the issue via WiFi? Because my tests (in which I experienced no instability) were all done in a wired setup.

Yes - I have only tested for these lockups on Wi-Fi. I now have these tests in my queue:

It'll take a couple days to report back...

This sounds suspiciously like the issue I had with -rc4 on an MBL, except I'm going through an external AP (running OpenWrt, too). Perhaps there's a relation?

I'm having a peculiar problem with 22.03.0-rc4. I installed it on a My Book Live Duo (apm821xx), no configuration changes except setting the lan interface to dhcp and disabling dnsmasq/odhcpd and firewall. Super-short overview over my network: Main router (x86) ---+--- My Book Live (apm821xx) | +--- Access Point (mt7621) ---(wifi)--- Wireless clients (main router and AP are running OpenWrt 21.02.something) When I connect from wireless clients in my n…

(JFTR, I have not tried with another rc or snapshot yet.)

Flash with a snapshot that contains the 80211 uninitialized lock fix

How is this going? No complains from the missus here after 2 days, to note.

Larger bug report: Here's the testing I have done (#1 & #2 below reported earlier). See the OP for initial description of the problem, but the short story is that htop freezes after a while while ssh'd in over wi-fi.

The remainder of the note is my notes as I was doing these steps:

I edited the title to contain "wifi".

This is likely something about the wifi breaking connection, forcing the continuous TCP session (?) for SSH to break, which then freezes the SSH terminal.