I have installed openwrt v18.6.2 on a PlusNet Hub One successfully. I then installed the app to talk to USB devies and Samba36. I was able to access (read/write/create folders) the share USB from three Windows 10 PCs for several days, then one PC refused the connection stating it did not accept SMB1. To my knowledge the Windows PC in question did not receive any updates. I assume that the Samba 36 package implements SMB3.
I have added the following lines to /etc/samba/smb.conf.template:

I understand that Microsoft stopped including SMB1 support from Edition 1709 however all PCs report in their Samba server config:
EnableSMB1Protocol : True
EnableSMB2Protocol : True

The Samba client configuration files on all 3 PC are identical.

Thanks for any help.

I am not sure the server will use this file as configuration. smb.conf maybe, but smb.conf.template highly unlikely.

This assumption is incorrect, samba 3.6 is the first version to include support for the SMB2 protocol, for SMB3 you need at least samba 4.1.

Try to apply the default value max protocol = SMB2 and purge the others.
In any case, if 2 windows clients are connecting without issues while the third can't, it would mean that the problem lies in the third client.
Also try to reboot the openwrt, not just restart the service.

I have Samba on Openwrt set for

but its obviously negotiating SMB 1 with Windows.

Thanks for your help.

I understand that Microsoft stopped including SMB1 support from Edition 1709

SMB1 support in Windows 10 is an optional component that's not enabled by default, though it can be turned on form Control Panel > Programs > Turn Windows features on or off 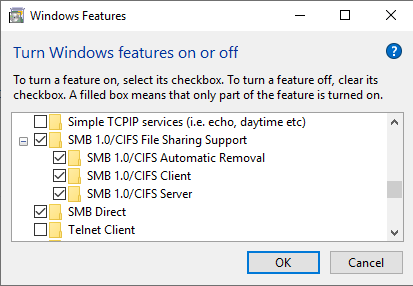