I am currently trying to get DSL modem statistics into collectd, using a custom script called by the collectd-mod-exec. I fully understand that, to mitigate security concerns, collectd refuses to run scripts as root. However, this presents several problems:

In order to retrieve DSL statistics, or more specifically data from the DSL modem, I need to run the following (transcribed from /lib/functions/lantiq_dsl.sh):

(note: $XDSL_CTRL is either vdsl_cpe_control or, on older versions of OpenWrt, dsl_cpe_control, $@ is the actual command sent to the DSL modem.)

Now, when run as non-root user, this will obviously fail on several levels:

I am at a loss how all of this can be reformed so it would work as non-root user. The only way I see is to make an exception and ask collectd to run a script as root. Is there any way to do this?

Or does someone have another, better idea?

(I am thinking about running a cronjob as root that creates the collectd values on a regular basis, writes them to a temporary file, and just have the script called by collectd retrieve it, but that seems ... not so great.)

Thank you for your reply. It's very terse, but I assume you are talking about configuring the exec plugin to run as root?

As I said, collectd, or at least the exec plugin, refuses to run scripts as root.

I would suggest rewriting your monitoring script in a language such as Lua that collectd has a loadable module for. I.e. avoid the exec plugin completely. Then your code will run as a part of collectd process, which runs as root, without any complaints.

A sound suggestion, but I am really not familiar enough with LUA to pull that off

That's okay. I will go the cronjob route then. Honestly, I think getting the values "asynchronously" is not a bad idea anyway since retrieving values from the modem is rather costly, and doesn't need to happen very frequently.

I am really not familiar enough with LUA

Collectd also has modules for Perl and Python

collectd running as root, started from /etc/init.d "old style". And then execs my custom script. So you might opt for using older version of collectd.

collectd running as root, started from /etc/init.d "old style". And then execs my custom script

CMIIW, but your coovachili.sh is still executed as non-root "nobody"

Collectd also has modules for Perl

coovachilli.sh must be explicitly started to run as nobody:

Otherwise its root, too. And does not work.

I need to run the following (transcribed from /lib/functions/lantiq_dsl.sh):

Could you just copy this into its own script and suid that to root and just call that? I have not tried that, but it might work, no?

Linux does not support setuid scripts. But sudo can be a workable solution.

It's okay, I'm now doing it via a crontab into a temporary file that the exec script then just pipes back to collectd. Thank you for all your suggestions. "There is no (simple/non-workaround-ish) way" is a perfectly valid answer.

See How to mark a topic as [Solved]

What, no tutorial video?

Quick follow-up question: Is there any public interest in what I concocted up for myself? Then I will upload the files into a Github Gist or something. 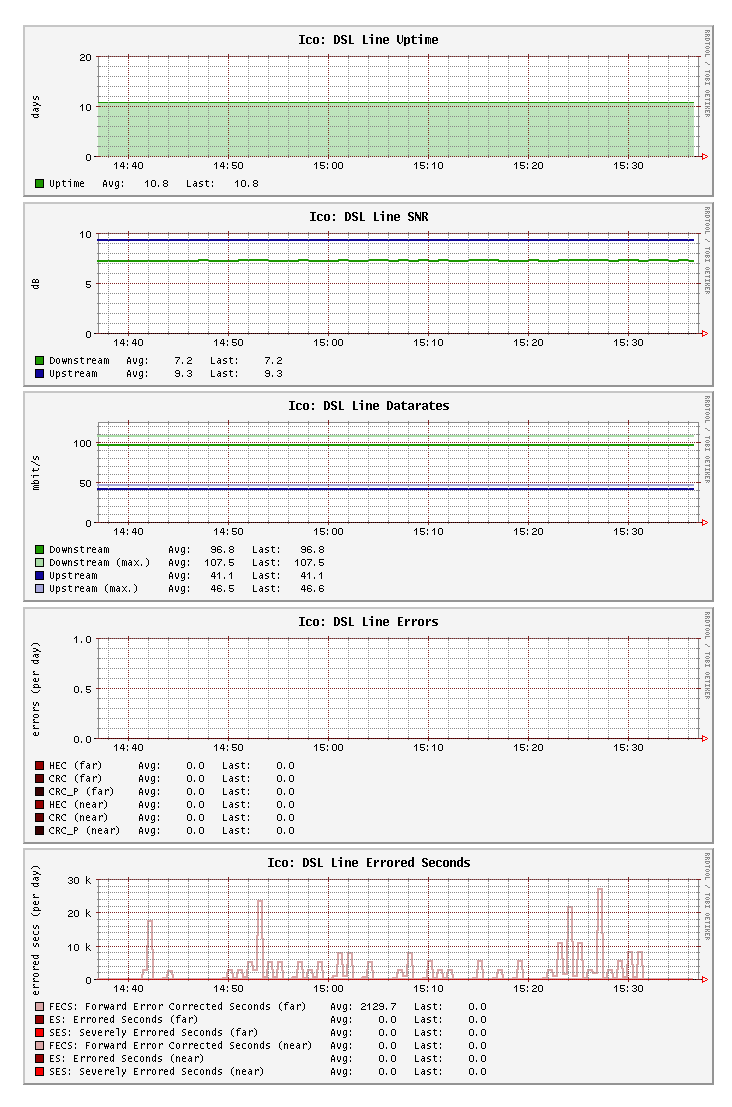 Note: "errors" and "errored seconds" are scaled up "per day" to deliver a somewhat informative scale. The collectd "DERIVE" data types normalizes into "per second", which does make sense if you want to display value changes on a time scale. But if you only receive two or three errors in a statistics period, that results into a scale that only displays decimal places which is of no use to anyone.

Quick follow-up question: Is there any public interest in what I concocted up for myself? Then I will upload the files into a Github Gist or something.

Yes, please! These look like useful monitoring data for marginal lines, It is so much nicer not having to resort to external tools for such monitoring...

Here you go. It is not exceedingly beautiful code, but it isn't bad either and does not contain horrible misterks.

There are more than three files. show original

Pointer: With 21.02, the whole process has changed. I rewrote the scripts to collect Lantiq DSL values in collectd for 21.02.