I have created an acces wifi on my MR18 and all is perfect. But, when I want to created a guest access, i have a lot of difficulties (Maybe because the MR18 is just an access point). I read lot of tutorials to do that but it still not working.

Can someone help me on this problem ?

Normally when a Guest network is created on the WAN facing router, forwarding would be blocked from Guest -> LAN, but allowed for Guest -> WAN, however this isn't possible on an access point since it isn't configured with a WAN network.

I have some capture about my configuration. I think is more simply with image :
This is my Wireless configuration on MR18 (with 3 radios) 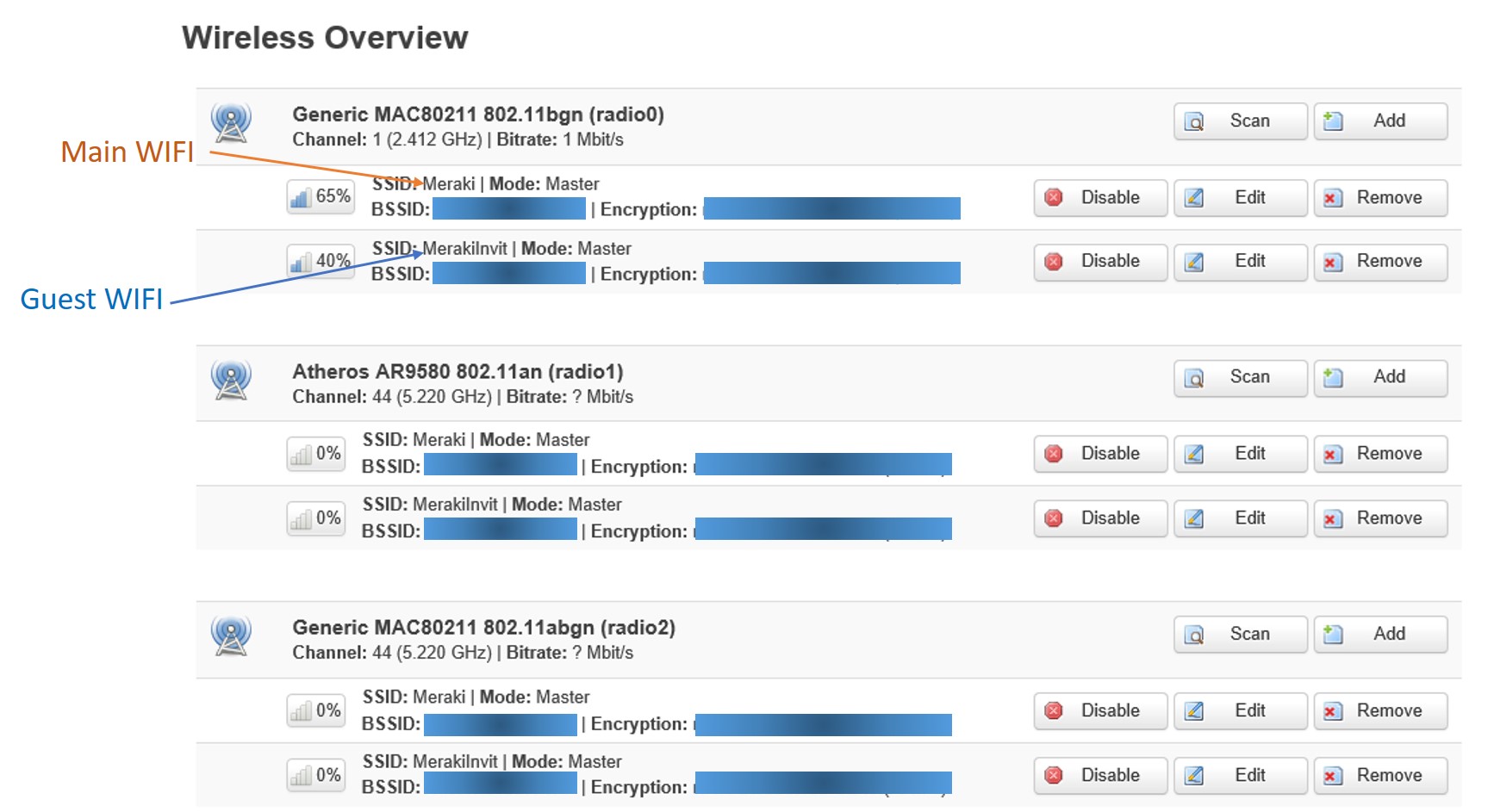 My Guest WIFI is MerakiInvit. I created an interface : 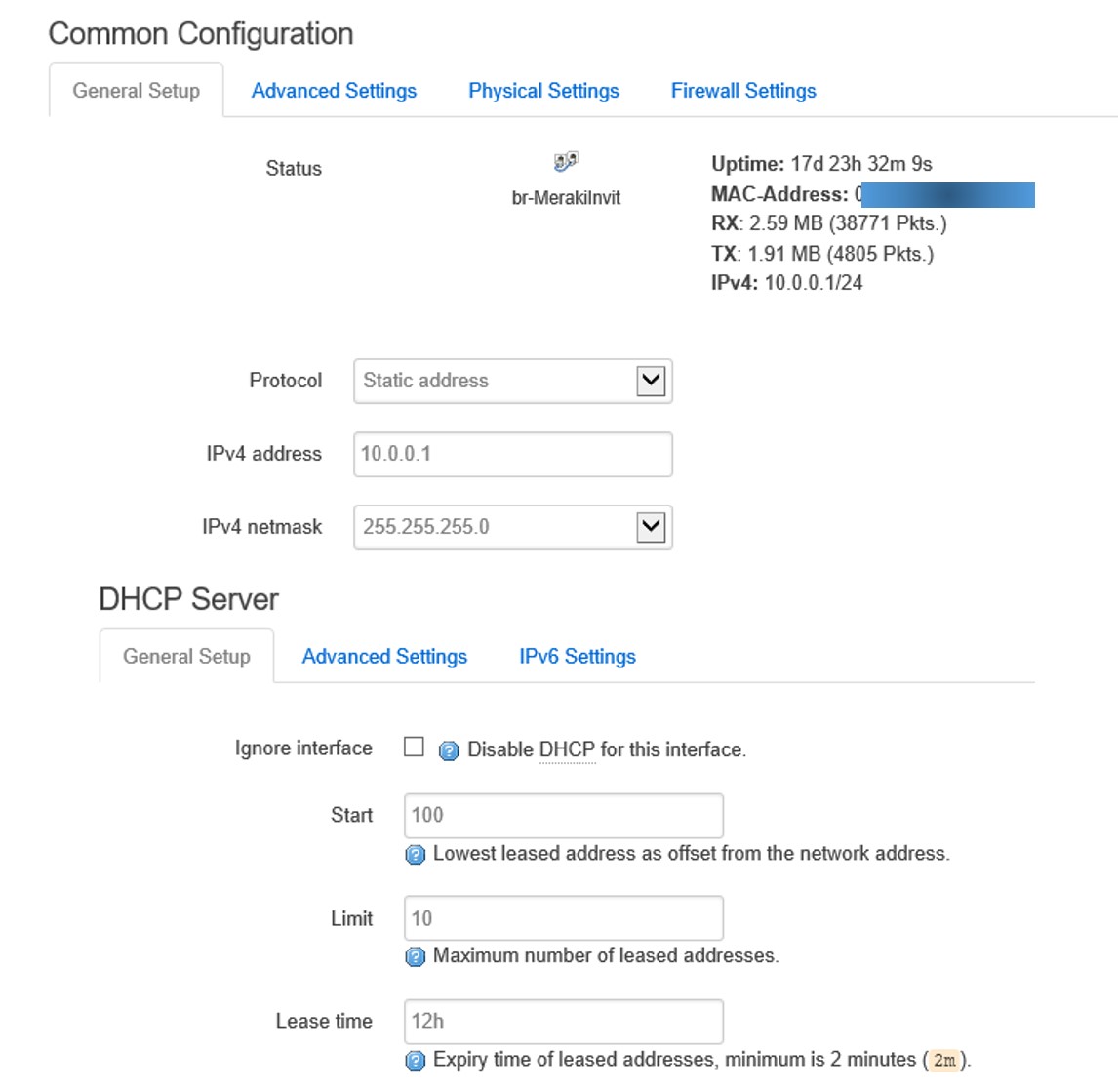 And, I modify the firewall setting to transfert Guest directly to WAN : 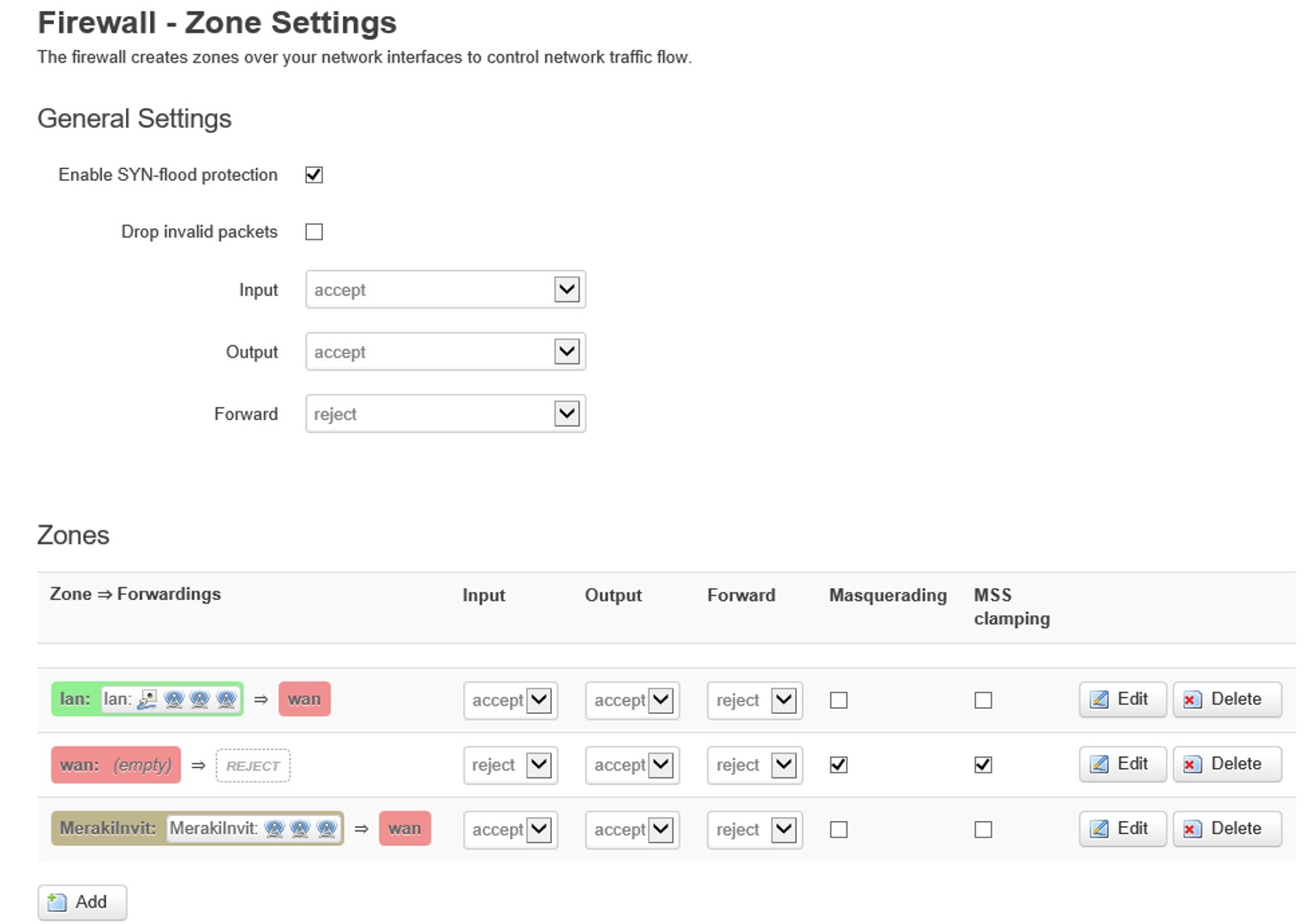 Thanks for your help

I don't know how you would configure this when you don't have a WAN interface, however I suspect it would involve what I suggested in my prior post.

You're right, the MR18 don't have WAN port. It's just an acces point with one ethernet port.
I read this post : TpLink TL-WA801ND v3 - LEDE 17.01.4 - Vlan Configuration
I think this is the same problem but i don't understand all.

Is there any person that have the same problem ?

Instead of a wan port you will need a wan Vlan... This is nontrivial the first time you set it up because you have to read up on what a Vlan is and how to configure them. It is very situation specific how you would want it set up... There isn't really a shortcut

I can say that each port can have only one untagged Vlan, so you probably need a tagged Vlan, in which each packet on the wire carries a Vlan ID with it.

A virtual LAN (VLAN) is any broadcast domain that is partitioned and isolated in a computer network at the data link layer (OSI layer 2). LAN is the abbreviation for local area network and in this context virtual refers to a physical object recreated and altered by additional logic. VLANs work by applying tags to network packets and handling these tags in networking systems – creating the appearance and functionality of network traffic that is physically on a single network but acts as if i VLANs...

Might be a good starting point. Once you understand the concept, how to configure it is much easier

The highest usable number is 254.

Can someone help me on this problem ?

I hope others were able to assist with the VLAN, etc...I am somewhat lost, though:

Maybe because the MR18 is just an access point

It's not "just an AP..." it's an LEDE device now, you just have to properly configure it.

@polarrys The question you have to ask yourself in order to figure out how to configure your system is:

When a packet comes in via your guest wifi, and needs to go to the internet via a router, how does it get to the router? How does the router know that it's a guest packet vs a "regular" packet? If you read up on VLANS and then can answer that fundamental question, then you'll be pretty good to go.

I am a noob about configuring network but I will read information about Vlan. Maybe a person has done this on a MR18

It's really not just about the MR18, you will need to make your router communicate with your MR18 in such a way that the reverse routing: from the internet, to your router, to your MR18 and out of the "guest" SSID also works. The problem is not solvable strictly by configuration of the MR18 alone.

The highest usable number is 254.

I hope others were able to assist with the VLAN, etc...I am somewhat lost, though:

I'm sure that one people have realized this on MR18. I will check. I will search a tuto about that.

It's not "just an AP..." it's an LEDE device now, you just have to properly configure it.

Yes, my MR18 has LEDE now but it's more complicated that Cisco Meraki software

I don't know what is masquereading on the LAN

I just one to creat 2 SSID : a main with all access and a guest with limted access

On my picture I see the WAN (linked to LAN). I will read informations about VLAN.
Maybe it exist a more simple system to created a guest access (I hope)

The problem is not solvable strictly by configuration of the MR18 alone.

As @dlakelan said. You will have to configure the Cisco device properly, as well. You will likely have to enable VLAN trunk ports between the Cisco and LEDE device.

The problem is not solvable strictly by configuration of the MR18 alone.

As @dlakelan said. You will have to configure the Cisco device properly, as well. You will likely have to enable VLAN trunk ports between the Cisco and LEDE device.

OK, I understand that I must create a VLAN on my Cisco router RV 180W

On my picture I see the WAN (linked to LAN).

Correct, but your guest WiFi is called "MerakiInvit," not WAN

OK, I understand that I must create a VLAN on my Cisco router RV 180W

Yes, make it a tagged vlan on the Cisco RV 180W (which is your actual router), and then make a tagged vlan on your Meraki with the same tag number. then bridge the second SSID on the meraki with the tagged vlan interface on the Meraki, making a single "Guest" interface. Then, provided that your cisco has correct firewall rules etc, your packets will flow from Guest interface to the wire tagged with the vlan, and then out to the RV180W, which routes it out to the internet via NAT (for IPv4) and then takes the return packet, and routes it down the vlan interface to the Meraki... which sees the vlan tag and knows to bridge it to the WLAN guest SSID.... If you understand that flow... you can get what you want.

On my picture I see the WAN (linked to LAN).

Correct, but your guest WiFi is called "MerakiInvit," not WAN

Yes, my guest wifi is MerakiInvit

Yes, my guest wifi is MerakiInvit

I think you're missing my point:

The Meraki should act as a bridge, between a tagged vlan on the wire, and the extra SSID... there is no IP routing that should happen in the Meraki.

You probably want the Guest Vlan to be on a separate ip subnet, 192.168.1.0/24 for example, and the Cisco RV180W to have an IP on this subnet say 192.168.1.1 associated with the VLAN interface on the 180W. Then clients on the guest vlan will get their ip addresses via DHCP either handed out by the Meraki, or handed out by the Cisco RV180W but not both choose which one you want to be in charge.

Also, consider if you want ipv6 here... depends on your situation. But again, should be a separate network number.