I am using Router A with 50Mbps down/up network (2.4Ghz)(which is connected to another modem + router in wireless repeater setup), and Router B(Tplink 1043ND V4 running 19.07.7) is connected to Router A via lan cable and it's acting as dumb AP. Router A provides dhcp to the clients and Router B is in the same subnet.

Now clients connecting to Router A via wifi, get half speed like 20-25 Mbps which is fine for repeater setup and i get full speed when using lan cable.

Connecting to Router B via lan cable also get full speed, but speeds drops to 1-3 Mbps when i connect to Router B via wifi. What is causing such drop in speed? It's like some sort of throttling.

As i understood, if clients getting full speed with lan cable connected to Router B then shouldn't they get similar speeds via wifi as well?

For the simplicity here is a connection diagram. 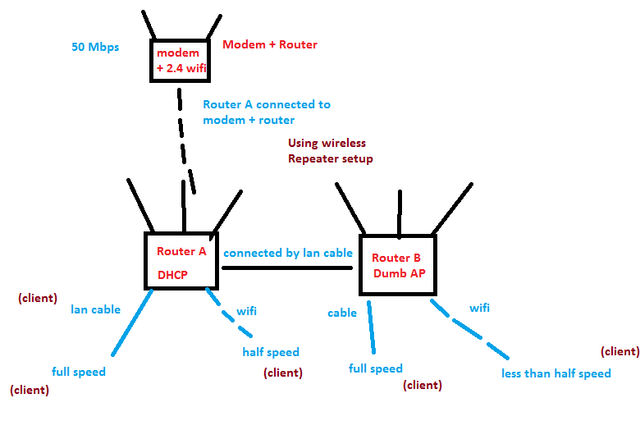 This issue seems to be similar to post here

Unless I'm doing something wrong here, what could be the reason of speed throttling?

Thanks for your reply..
Router B is using channel 6 and A is using 11. The downloads starts out at 15-20Mbps then goes down to 3-5 Mbps immediately... This only happens when clients connect to Router B by wifi.

Is there a neighbor interfering with channel 6?

No one else is using this channel.

It is sufficient, if say your neighbors use any of the close by channels, so if e.g. either channel 5 or 7 is used in your WiFi suround you can expect interference on B's channel 6 (same for any other channel X with 1 < X < 11, X >6 however should also interfere with A's WiFi).

So... Do I have to experiment with the remaining channels? Ok will try

I would use something like vrem's open source wifi analyser for android to get an overview about which channels are in use in your rf environment.

I just tried all the available channels, and i get similar speeds in all of there... Some are slow and some are fast... channel 10 & 11 are the fastest as i observed. Still i can't even reach half the speed of my plan..

Something seems to be limiting the speed, i don't know what's happening... It's not taking speed from lan cable to wifi.. if i said it correctly!

dmesg shows this frequently, what does it mean, entered blocking state? disabled state?

I had a similar experience with channel 11.

In my case, it turned out to be the Windows 10 NIC drivers.

I downloaded and installed drivers from the NIC vendor, and channel 11 now works as expected.

Thanks for the replies.... After struggling hours with this issue... I finally figured it out.
Turns out Router A is somehow incompatible with Router B which is why it's not working with full speed. I changed router and now i see full speed wired and wireless.

Router A has no issue, it's running DDWRT. It's just my assumption that something is not working correctly. I even factory restored Router B just to see how it works... I plugged cable between Router A Lan port to Router B Wan port.

This issue has been so weird... Maybe it's some sort of firmware bug in DDWRT side.
Will try updating the firmware on Router A some other time and see if it helps...