So... I managed to brick my router I think (Xiaomi Mi WiFi R3G)

I'll try to post as many details as possible, and by the way if this is not the right section of the forum for these sorts of things do not hesitate to move the thread to the appropriate location.

So, the other day I built a custom image for the Xiaomi Mi WiFi R3G I have (1st gen, the powerful one) using the current dev tree. It was already running on a development build, but what did it I think it was the -march option I used. Because the CPU inside of it is from the MIPS32 1004Kc series, instead of using the default -march=mips32r2 -mtune=24k I thought "what the hell, let's go with -march=1004kc instead".

I say I think that was it, because the previous build was already using the same toolchain (binutils 2.35-sth, gcc 10.sth, testing kernel 5.10.sth) except from that change. And any user-space package difference would be irrelevant at this stage.

Anyway, when the router powers on, the LED lights up orange and it stays on all the time. So, I disassembled the thing, soldered some male dupont cables to the 3 relevant serial connection points in the board as shown in the picture (I had no headers available) and decided to see if I could get the serial console up: 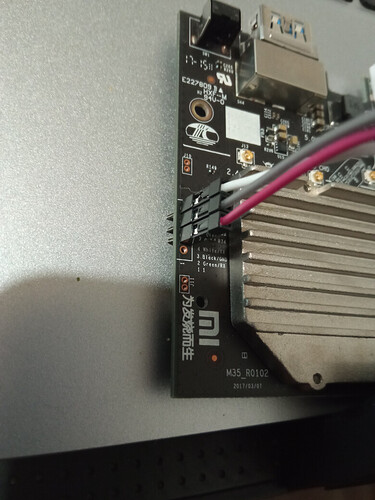 At first I thought I had no serial to USB adapter around, so I got to it through the UART of a Raspberry Pi 3B (both of them actually because I was not seeing anything when connecting to the router, so I tried them both). And this morning I realized I had a cheap CH341A based multiprogrammer that I could use as a TTL adapter too, so I went with it. Usual connentions, TX -> RX, RX -> TX and GND -> GND.

I used PuTTY this time, connecting at 115200 bauds but then again, same thing, no output from the serial console that I could see. No boot menu and the like, so I'm guessing the router is busted? Or at least I cannot get to the bootloader screen.

Still, when the router serial interface is connected, powering on the router keeps the orange LED off, I thought that'd be a good sign, but in all honesty I have no idea if it is of any relevance.

And that's it, any ideas guys/gals? Is it really gone for good or can you think of something else I could try? The 4th pin in the serial connection in the board seems not to be useful, and I can't see any location for a JTAG header in there.

Because the router doesn't have the usual flash memory that I could re-program (it's all NAND based, and I have no way to directly read/write to those chips) I don't think I could interface with it any other way other than through that serial port.

EDIT: It seems to be dead for sure unless the ROM chip is reprogramed with known-good data, the bootloader must have been modified too or taken a hit.

Since I cannot re-program TSOP48 chips and I don't have access to a good dump of it, the device is going to stay dead for the foreseeable future.

I've never had success trying to make a CH341 work in UART mode. To test any serial adapter, connect TX and RX together (not to the router) and see if it loops back what you type.

If the Ethernet ports come up (plug one to a switch and see if the link light on the switch comes on), bootloader is probably working.