I found out a new unpleasant issue. WAN slowdown issue (bug) when there is simultaneous LAN traffic between 1Gbps device and 100Mbps device.
Summary of the problem - When a 100Mbps client/s (Fast Ethernet) is/are connected to a router gigabit switch and there is a LAN data transfer between a Gigabit device (desktop PC in my case) and at least one 100Mbps device, the desktop PC (gigabit device) can only download/upload to WAN at really low speeds. The WAN performance drop to just 20-30Mbps download/upload speed with huge ping.

All details are given in several threads on the forum. Starting with this one.

Just found out a new unpleasant discovery. Today I've connected a gigabit switch to one of the ports LAN1 (to replace a 100Mbps old switch). [image] I have 3 devices connected to the switch - two Android TV boxes and a 4K TV. Switch is connected to the router port LAN1. A desktop PC is connected to the R7800 port LAN4. There is a Plex server installed on the desktop PC. When a 4K movie with bitrate ~70Mbps is played on the TV box or on the 4K TV set, the Internet download/upload speeds on …

I've tried this with several gigabit routers - Netgear R7800, TP-Link WDR4300, Belkin RT3200. With all of them the results are completely repeatable using the same bench test setup.
I've tried several OpenWRT versions with default and custom configurations. The issue is present on all stock firmwares too and they are based on older OpenWRT code.

No such loss of performance can be observed when only Gigabit clients are connected to the gigabit switch. Instead we achieve Gigabit Full Duplex speeds as can be expected - simultaneous 1Gbps download and 1Gbps upload WAN/LAN performance no matter of the LAN traffic.

Not to diminish your issue, but I think your claim "All OpenWrt versions" (I corrected the spelling to the desired capitalization) requires more evidence than just a few examples, also just claiming what is backed by evidence "several router models and OpenWrt versions" is already severe enough.

Same for "The issue is present on all stock firmwares too"...

But to summarize: you observe that when an end device with a gigabit link to the switch ports "talks" to a fastethernet device on the same switch all communications between that device the switch get downgraded to fastethernet speeds? Does this also affect other devices that communicate with gigabit speeds over different switch ports?

I've probably not explained it using the proper wording. I've started with editing the title.
Under All OpenWrt versions I've meant - all versions I've tried, and that is not exactly correct. Same for the stock firmwares. I hope it's a bit clearer now.
Back to the WAN/LAN performance drop issue.
I've explained the issue in great details in several other posts on the forum. I don't know if it is suitable to copy and paste the same information here again.
I think that this issue is significant and deserves its own thread.
So here it is what I've found so far.
A desktop PC is connected at 1Gbps to the R7800 LAN port 4. There is a Plex server installed on the desktop PC.
When a 4K movie with bitrate ~70Mbps is played on the TV box and on the 4K TV set, the Internet (WAN) download/upload speeds on the desktop PC connected by cable drop dramatically from 940/680 Mbps with 1ms ping to just anything between 25-350/100-200Mbps. The speedtest results are really low and inconsistent (varying hugely from as low as 25Mbps to 350Mbps) with high ping from 50 to over 350 ms.
I can hardly reach the speeds on the below picture during a LAN traffic from a desktop PC streaming two 4K movies with video bitrate around 70Mbps to Android TV (playing the movie) and Android Set-top box.

I can reproduce this using iperf3 to create LAN traffic between two or more LAN clients.

If I connect a Laptop with 1Gbps connection instead of 100Mbps device, the WAN slowdown doesn't occur.

But it does occur when I connect the same Laptop but with 100Mbps cable (4 wires).

I have this WAN down/up speeds limitation only during active LAN transfer/s between a PC and another 100Mbps LAN client/s. You need simultaneous WAN and LAN transfers. I use iperf3 to better shape the scenario.
Otherwise this doesn't occur.

I also assume this means a device with a built-in gigabit ethernet switch?

You also didn't mention you have connect track drop errors and that the LAN 1 port changes colors to indicate a 100 Mbps connection when this occurs on a downstream switch...

Have you ruled out the gigabit switch and cabling?

Also what was causing that error?

Yes I mean a device with a built-in gigabit ethernet switch.
But actually it doesn't matter if we use an additional external gigabit switch connected with cable to the built-in switch.
About the cabling you can see this post Ipq806x NSS build (Netgear R7800 / TP-Link C2600 / Linksys EA8500) - #1878 by sppmaster
But with the ISP cheap Gigabit router I have no problems at all with cable connections and the same network setup and devices.

This is the speedtest result on the desktop PC (used as a file server) with the ISP router during simultaneous playing of three 4K movies on all three devices connected to the Gigabit switch with total video bitrate over 300Mbps. The desktop PC with Plex server installed on it, streams data (three 4K movies) to three 100Mbps devices (smart TV and two Android TV boxes). The WAN speed test is run simultaneously on the PC.
All other gigabit routers I've tested (Netgear R7800, TP-Link WDR4300, Belkin RT3200) simply fail with this no matter if they use OpenWrt or stock firmware. 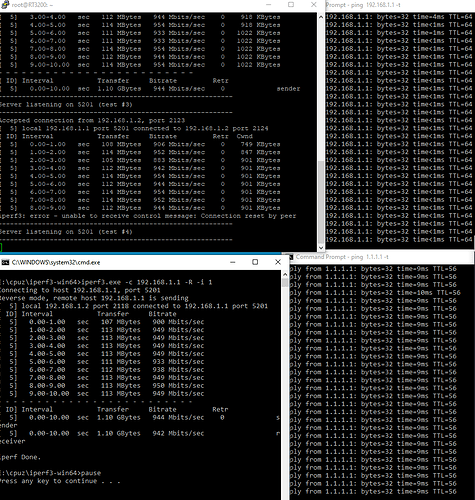 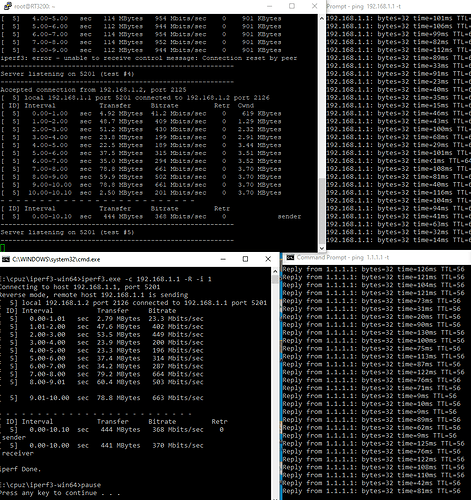 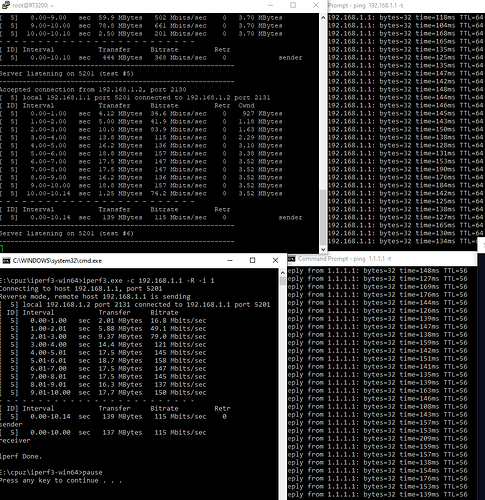 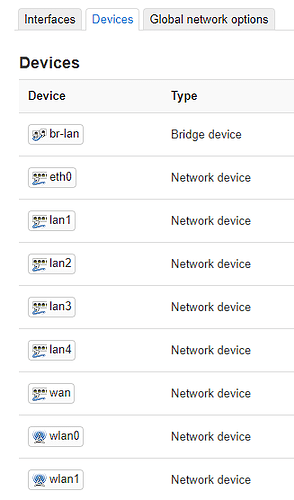