thank you. i somehow got used to the thought that i have to reboot it to make the commands work, but maybe it was not necessary.

today i tried it and they worked without a reboot. so it looks like i have gotten that wrong.

are you sure that it is not normal that i have to bring up the wwan interface manually? the documentation sounds like this is normal, unless i'm misunderstanding it:
https://openwrt.org/toh/d-link/d-link_dwr-921#g3g_modem

where do i find my config files?

by "option in the interface settings" you mean the bottom section in system -> startup in luci, right?

so it should look like this?
exit 0 ifup wwan

No, the line exit 0 must be at the end, so whatever you add there keep it above.

Another thing to consider is that many wireless modems fail to notify upper layers that the connection to the provider is down, so that the OS doesn't "know" that it needs to initiate reconnection. One page that discusses this is http://www.embeddedpi.com/documentation/3g-4g-modems/raspberry-pi-sierra-wireless-mc7304-modem-qmi-interface-setup I don't think the scripts there are generally useful for OpenWrt as they require Perl (which is for all-in-one routers, huge), but perhaps worth seeing if the interface is actually marked as "DOWN" (using, for example, ip link) when you lose connectivity.

I haven't written a "router friendly" version of the script myself, but understanding the source of the problem can help determine a resolution better than the sledgehammer of "reboot".

i'm encountering a problem when trying to do that. there is no "advanced settings" tab and it just reads:
there is no device assigned yet, please attach a network device in the "physical settings" tab

however, i have a working internet connection right now.

here are two screenshots (i have removed details like ip-addresses): 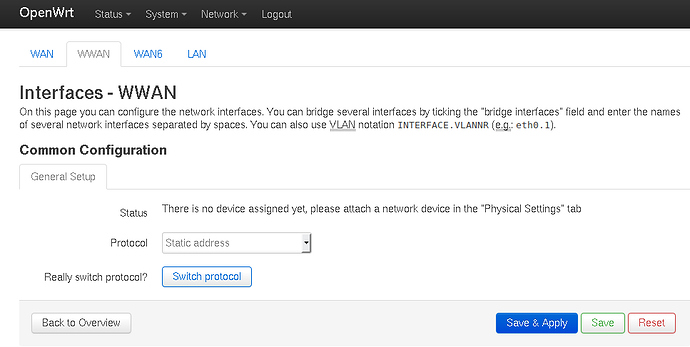 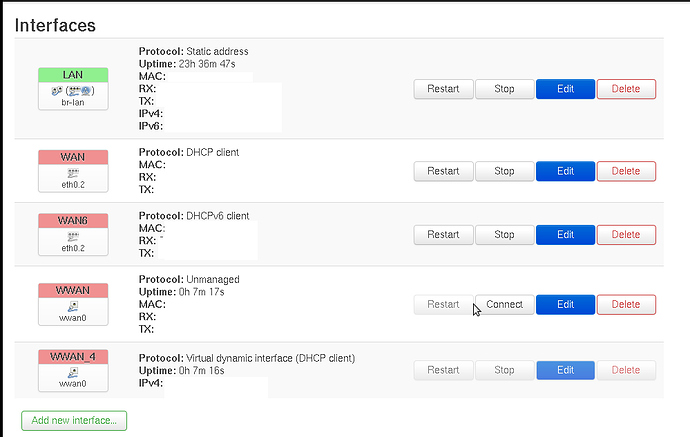 what does this mean? why does it show the wwan interface as not connected in the second image?

i hope this is what you meant...X always means that i replaced a letter or a number, let me know if you need to know any of those

it would have been my next step to change it to '1'...but right now (after noticing that wwan is shown as not connected though it apparently should be) i'm fearing that there may be a basic problem with my configuration of network interfaces.

i suppose as long as i'm not sure about that, i shouldn't make any changes.

what do you say to the screenshots and the terminal output i posted? is it normal that wwan interface is shown as not connected?

That would be my first step:

https://openwrt.org/docs/guide-user/base-system/basic-networking
auto
Specifies whether to bring up interface on boot

Perhaps if you can monitor neigh state...;

so to change the value, is it correct to run the following commands?

or is there a better way? e.g. editing the /etc/config/network file?

i still don't know if it is normal that the wwan interface is shown as not connected (see the screenshots i posted), but maybe this will change when i set the value to '1'

Save and verify the changes:

okay, it works now. i don't have to run the ifup wwan command manually anymore. thank you and everybody else

in luci, i now have the option to click on "restart" in the wwan section. however:

is this supposed to be this way?

You are using the wwan protocol for the mobile device, which is kind of automatic probing. If you use the specific protocol like 3g, qmi, or ncm I think it will look normal, like mine.

so in other words, the three points i mentioned in the last post are okay that way and by now there is no need to modify anything?

I think it is more a visual problem with the presentation of Luci, than operational, as I understand that the interface is working properly and comes up on boot now.

i suppose you are referring to the "there is no device assigned yet..." message. okay, if you think it is nothing to be concerned about then i trust you.

thanks to everybody who spent time on this thread. i really appreciate that!