I'd like to replace my ISP's lousy router with my own setup. I have Centurylink fiber, which is accessed via PPPoE.

I currently have a Raspberry Pi 4 (8GB RAM) and would like to use this as my router. I understand that the wifi hardware on board the pi is not the greatest, so I thought I would avoid using that.

My goal is to have a setup like so:

Some wired devices will also be connected to the switch

My question is really for hardware recommendations for the switch and wireless APs. Also general feedback about whether this plan is sane or not is appreciated!

Ubiquiti APs seem to be the hot thing, so I was thinking of getting one of their cheaper Wifi 6 APs to see how it behaves with the pi router. I've never used Ubiquity's stuff before so I am not even sure if this is a supported configuration.

In terms of technical expertise - I am a software developer however I am not a linux sysadmin nor a networking guru so while I expect to be able to pull this off, I am prepared for some stumbles along the way

Get any dumb gigabit switch, or a smart one, if you need that kind of functionality.
There's smart switch support in openwrt, look for the RTL838x SoC - Support for RTL838x based managed switches

I'd use Belkin RT3200s as APs, configured as in https://openwrt.org/docs/guide-user/network/wifi/dumbap, they're usually $70 on ebay, new.

Thanks for your advice, @frollic!

Is it necessary to have switch/AP hardware that can also install OpenWrt? I am assuming I can just configure whatever software they have installed if OpenWrt is not an option for those devices.

I was able to acquire a Ubiquiti wifi 6 lite AP. Looks like I can install OpenWrt on it instead of using their OS. Is it generally a good idea to flash with OpenWrt when available?

I would propose to switch this around, use a USB3 gigabit ethernet dongle (e.g. the TP-Link UE300 seems to work for a lot of folks reasonably well up to ~ 1 Gbps rates) as WAN device and use a traffic shaper like sqm-scripts on the WAN side (that way you can avoid the often unattractive large buffering in USB3 dongles) and use the built in ethernet port for the LAN side.

My question is really for hardware recommendations for the switch and wireless APs.

I would recommend a manageable switch so you can play with VLANs if you must, maybe a power over ethernet enabled one to power APs (that depends a bit on the APs you select); I recently got a Zyxel GS1900-8HP which checks all of these boxes, and in addition can also be reflashed to use OpenWrt as its operating system (that was the criterion that made me choose that switch, but so far I am just using the proprietary OS it came with).

AP-wise I have no recommendation, except if you already have an OpenWrt capable router, just configure that as dumb AP to get started and then you can take your time finding the optimal replacement...

Is it necessary to have switch/AP hardware that can also install OpenWrt?

Only if you prefer the OpenWrt way of configuring things and the consistency of all devices being configured quite similarly (so you do not have to learn three ways to do the same thing).

I am assuming I can just configure whatever software they have installed if OpenWrt is not an option for those devices.

was able to acquire a Ubiquiti wifi 6 lite AP. Looks like I can install OpenWrt on it instead of using their OS. Is it generally a good idea to flash with OpenWrt when available?

As long as the proprietary OS offers all the features you need and is still in active maintenance (read there are regular and timely security updates) I see no reason why you need to switch to OpenWrt. However often OpenWrt will still allow you to use existing devices with timely security updates long after the device manufacturer will have essentially abandoned it...

The OpenWrt can't be installed on the Belkin rt3200, can it? Factory firmware is OK for AP mode on this one?

Thanks so much for your advice @moeller0! Noted re: ethernet dongle altho I can't say I understand

. Nothing I can't learn tho! 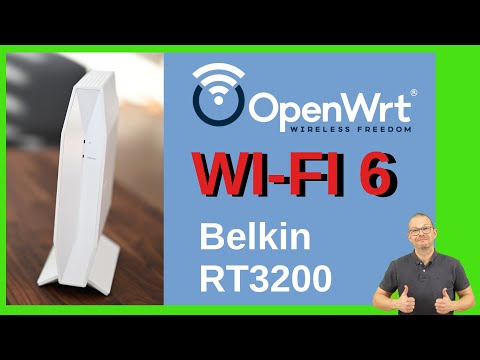 Marc did a whole series of video on openwrt with Rt3200