Hello everyone, I've been making efforts to replicate the following VLANs setup in OpenWRT and have already locked myself out of it once doing so. Curious if anyone can provide a bit of direction: https://rickfreyconsulting.com/basic-vlans-with-switchos-part-2/ 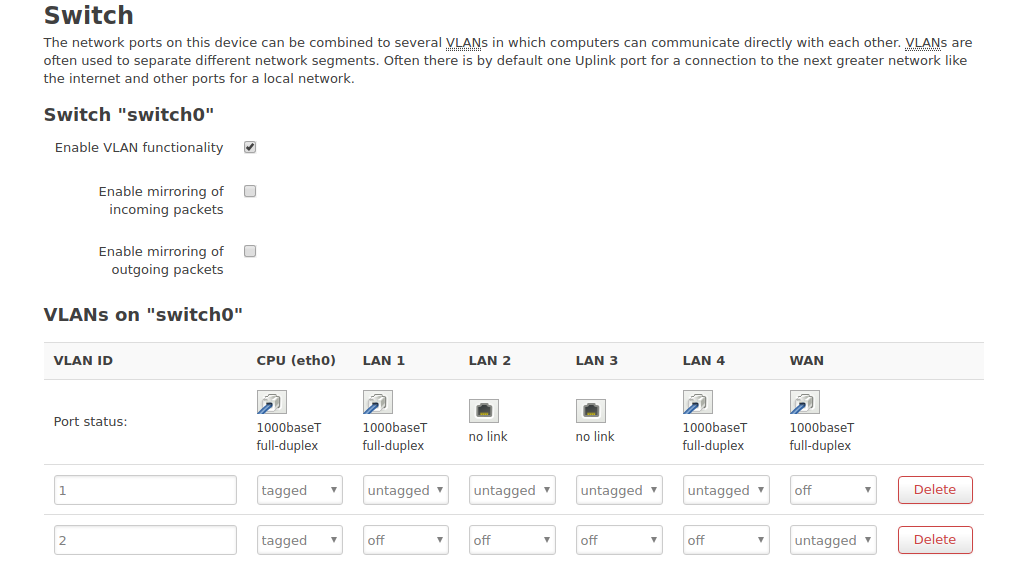 I find it extremely difficult to lock myself out during configuration of VLANs and trunks - when following the images on screen.

The link I provided I've setup on a MikroTik switch using SWOS, exactly how the link stated to do so. Now I'm stepping into configuring OpenWRT router config VLANs to replicate the top part of the link config illustrated for RouterOS. One thing I've noticed is that openWRT doesn't seem to like e.g. VLAN2, VLAN10, VLAN20... likes them in series. So I'm re-configuring SWOS VLANS as VLAN1 for (2), VLAN2 for (10) and VLAN3 for (20). Let you know how it goes! I did see the illustration your provided earlier, was confused on how to push DHCP to each VLAN now thanks! I'll setup each interface accordingly as you stated on your last line, @lleachii thanks!

Many switch chips especially the low-end 10/100 models support only 15 VLANs. It is possible to have such a switch emit tag numbers higher than 15 but LUCI does not support that; you have to manually edit the config file. So if you're building the network yourself it is best to use low numbered VLANs.

On an external port, untagged is used to link to ordinary devices like a PC or cable modem that do not use VLANs.

Since the CPU has only one eth port, the default configuration has VLANs on the CPU side to make the modem and the LAN separate networks. eth0.1 is the LAN (in the LAN physical settings) and eth0.2 is the WAN used to link to the Internet.

A port can be set to untagged in only one VLAN and must be off in the others.

Multiple VLANs can be tagged on a port. The device at the other end of the connection must be able to parse the tags. It is not a good idea to try and mix tagged and untagged on the same port. That is another thing that often does not work on consumer-level switch chips.

I'm using port 24 as the uplink port to the RBM33G OpenWRT router to LAN1 port (VLAN1,2 and VLAN3) Hope it works, diving in now!

Ok, the following seems to work well for breaking out VLANS.

Yealink phone by default have DHCP option 132 turned up which means I should be able to hand off what VLAN they belong to during boot and/or provisioning... however no luck in passing VLAN3 value to them yet... 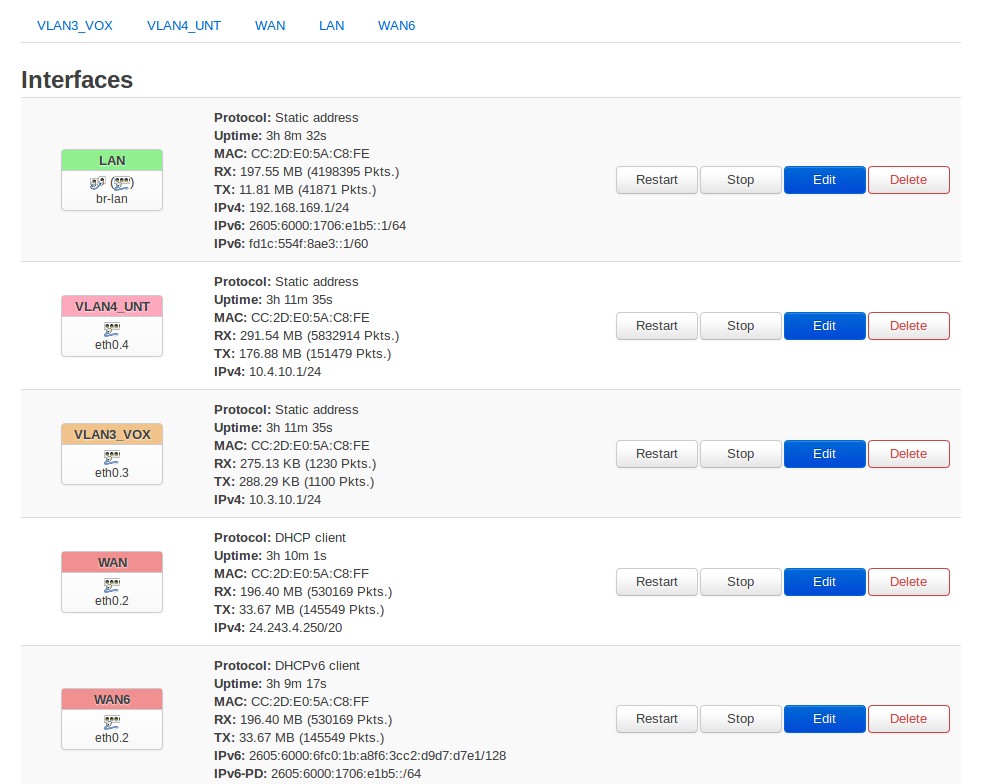 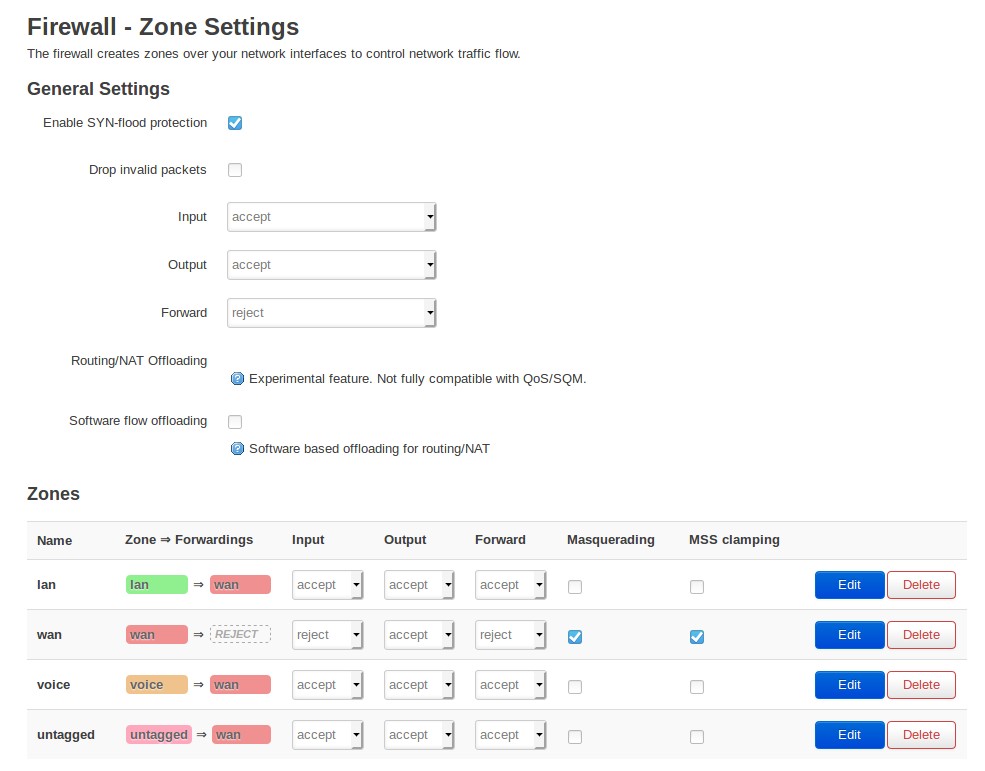 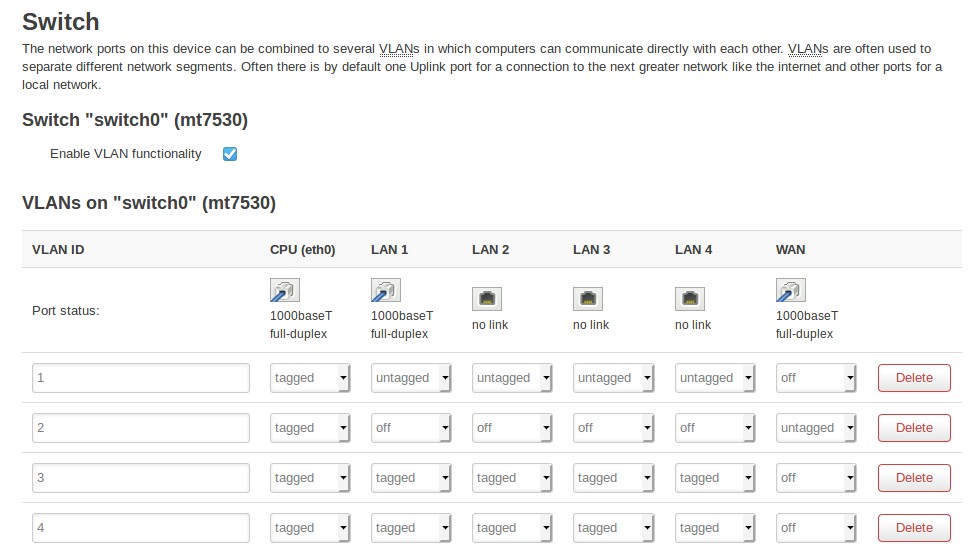 DHCP option 132 solved. Field must be set to VID=3