Receiving packets with own MAC Address

I currently receive this message on 2 of my 3 OpenWrt routers.

I have checked similar posts about this and all stated that there is a loop somewhere in the network. Which isn't the case in my network and also no device is spoofing the MAC addresses. I have the following network setup. 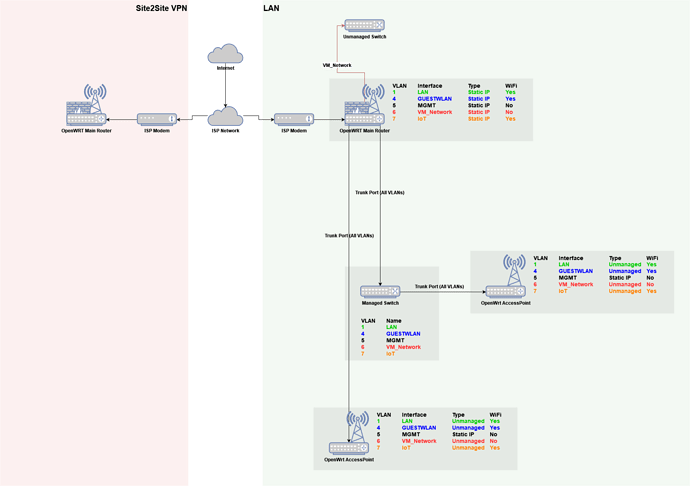 I have checked the Routers and all have the same MAC Address for the same interface. Now if I want to access the MGMT interface on one of my AccessPoints, I will connect via WiFi on the Unmanaged LAN interface, will be routed to the Main router inside the LAN VLAN (1), will then be routed back to the AccessPoint inside the MGMT VLAN (5). As it is intendend.

How do I get a package at one of the APs saying it has its own MAC? All the Ethernet Frames should be rewritten with the MAC address of the Main router when they get processed by it.

Can anyone help me with this?

Having added @jsyjr's firewall rule and left things running for a few days, once again I had some interesting behaviour. Firstly - unfortunately this did not fix the original kernel warning issue, I actually received more than double the warning logs over a two day period (+200 per day) but I don't notice any performance degradation at all. I can't see any particular patterns over timings when the warnings are logged either - seems pretty random to the untrained eye. The firewall rule did, howe…

I had an 200 IQ moment yesterday after my message and moved the cable that comes from the first router. Instead of using the second router's WAN port, I plugged it into LAN1. After all I want it to behave like a switch. After enabling VLAN20 on port 4 (they are swapped in the config) instead of 5 (WAN) it worked fine. I have it running like this since yesterday and everything seems to be going as expected! I lost an ethernet port, but I can live with that. Should I report this bug somewhere?

Yes, though hardly fancy. A quick google search for the switch model and icmpv6 quickly indicates that I must turn off IGMP snooping. As soon as I did that, everying else started to work. Thank-you @dlakelan and @trendy for your help. I learned quite a bit on the way.

After locking myself out of the 2 APs it turns out that it had some kind of problem in the switch configuration. I used the config from one AP for the other one during setup and it took the same MAC addresses????
After rolling back to a backup I went to Interface->Devices-> and reset all devices except for the br-lan. This resulted in it actually using its real MAC address.
The weird part being that the MAC address which was used by both of the APs isn't the same of any of them.
I don't know how this can happen. Seems very strange to me.