Yeah, now that 21.02.0 final is out, hopefully someone can figure out the cause of the issues. Some people have reported better luck with the master, while others still have problems with that on WRT3200ACM & WRT32X, too: Users needed to test Wi-Fi stability on Linksys WRT3200ACM & WRT32X on OpenWrt 21.02.0-rc4

Master most definitely fixed the wireless issues I had. I’m checking wireless commits on master which were not backported to 21.02. If I find the commit that fixes this, this will all end.

Does not appear to be a consistent result regarding master having resolved issue on 88W8964 device.

This post was sent on July 24th, there’s been changes on the master branch since this date. I’ve tested master recently. There could be newer commits on the branch which might change the behavior this user is experiencing on their device.

P.S. Please tag me if you don’t send your response as a reply to me.

Yes, I know the timelines, but you were also reporting master as working at the time that moniker tested and reported it to be broken; as per the PR you had open to revert BLOB. I am simply stating that different results are being indicated by different people testing.

But I keep coming back to the result from when we first pulled the BLOB from the OEM FW, it is probably AP related as indicated by post client.

No, I did not know about this AMSDU workaround.

Before I try this, I have 4 questions:

The commands you provide append a "0" to those 2 files.

Thanks for your help @anomeome !

Will give you relevant information regarding what is in play, including the version of the BLOB. You will see those two BLOBs on a default type build, if you build your own image you can utilise the per device rootfs to include / exclude things as desired (BT, FW...).

Thank you! Using 88W8964. Hardware version 7, which actually makes me wonder if we should report that sort of info when reporting our success/or not in using different versions of the driver.

I have been running 19.07.7 with eduperez's drivers for a while now with great performance.

My goal was to get the correct result code from the firmware commands, so I added a check in hif/pcie/pcie.c:

Without my knowledge from the usage of the firmware it's hard for me to solve these issues.

But it was worth for trying it.

WiFi works for me currently, but only WPA2 and 802.11w Management Frame Protection disabled.

For the OpenWrt developers:
I think it's IMHO better to disable 802.11w in the current stable images for WRT32X by default for the first time, if it's easy to solve. Better for other users. On the current images it's optional in the default configuration, but breaks WiFi completely on this router.

Just a note: I needed to add this fix to resolve the issues I was seeing.

If you do not already have the following, try adding:

@eduperez would you be able to compile the older driver version for 21.02.0 release?

Similar to how you did with 21.02.0 -RC4. I feel like not enough testing or feedback came back from that. I feel like most users tried downgrading the firmware blog but I did not see any feedback on the older driver plus older firmware blog. I am willing to test if you are able to compile it.

Thank you for your time.

I am having a bit of flaky response time on 2ghz/5ghz wifi.
Also looks like 5ghz periodically drops clients.
Is anyone of you have a stable one? If yes could you please share the setup?

After many testing, the router sooner or later ends with the same wifi problems...
May be you could try this, but you will get no more updates.

Hello Everyone, I am sad to say that OpenWRT from version 18.06.2 onwards (including 19.07.0) the 5ghz wifi on the Linksys WRT1900ACS (i have the v2) is not stable. I have tried every version after 18.06.1 and every single one has the same problem. The Wifi remains up for about a day then starts becoming unstable by not allowing new clients to connect and then slowly dropping clients over time. Every day or so the radio requires a manual restart to restore wifi functionality. When I revert b…

Now I´m using wrt1900acs-v2 with wifi OFF and a second router as wifi AP.

I have 1900ACS v1 and haven't noticed any problems running 19.07.7 (running for months with the drivers from eduperez) or 21.02.0 (running for a few weeks with stock drivers and the AMSDU fix).
Random note: I use the 5ghz radio only and the 2.4ghz one I turn off. 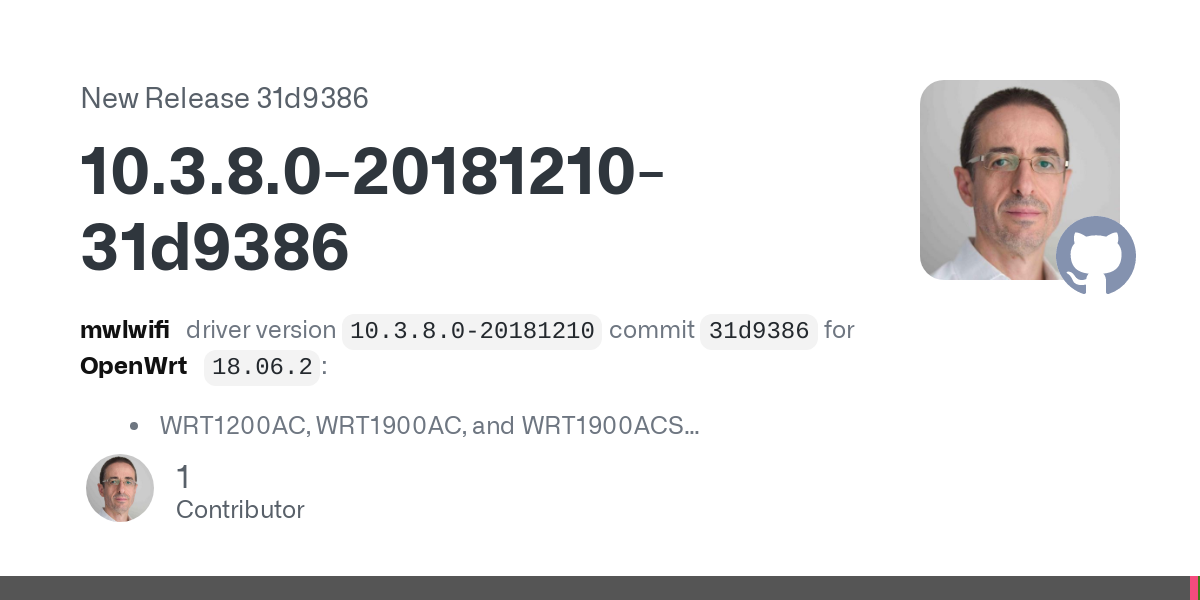 After upgrading my machine, I cannot build packages for 19.07 any longer; I have to prepare a virtual machine, with an older version of the operating system, and this will take some time.

@eduperez I just went to download the drivers for 21.02.0 and they don't seem to be there right now. I'm not sure if there was an issue and you had to take them down or not. But I figured I would let you know just in case. I would like to test them whenever they are ready. Thanks.