That's why my router is a ras pi 4 and this machine is left over running media PC stuff. I bought it maybe in 2016

If you want to build a mini pc based anything use the N5xxx series today.

I’ve just checked (quickly with a smart plug monitor), my home network setup is composed by 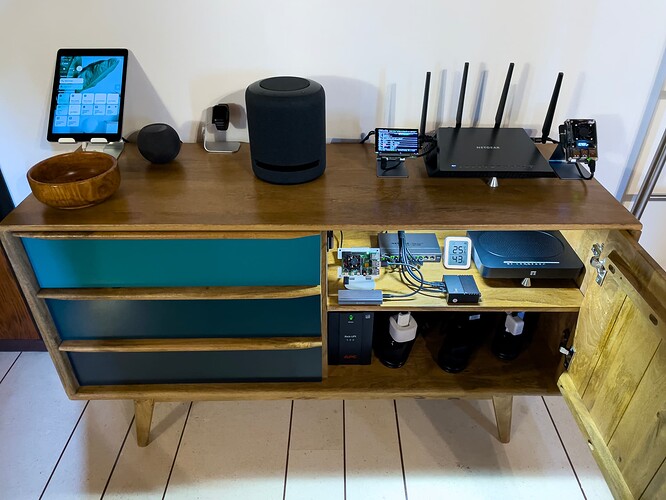 For comparison sake, quad core ARM Cortex-A53 processor that is in many AX routers is more than 2x faster then Celeron 3450 in single and multicore benchmarks

Citation needed, please. Hard to believe that an arm budget 64bit in-order core design from 2012 can dominate a 2016 out-of-order design, when both are in the same range of frequencies. N 3450 uses goldmont cores that wikipedia believes to be similarly performant as arm A-72 cores. And A72 is considerably more performant than A53 according to all measurements I saw (caveat not much).

Now it is well possible that A53 consumes much less power/energy than N3450 or A72, but for a performance based claim, linking ot some numbers might be helpful.

When frequency and number of cores are equal they are close overall but individual scores vary greatly. In modern SoC A57 is supplemented with NSS acceleration cores to help where A57 is weak, mainly in encryption. 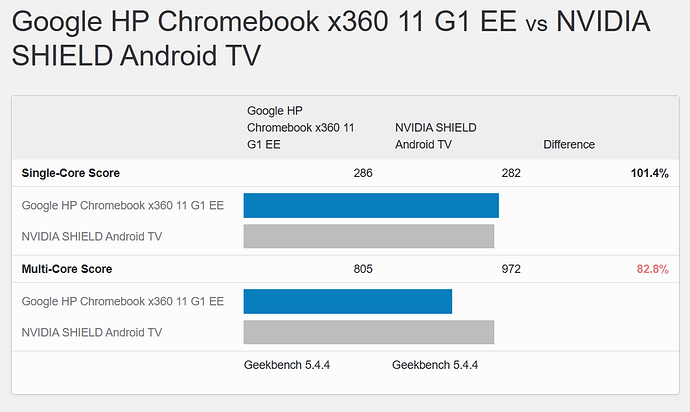 You seem to be shifting the goalposts here somewhat. Your initial claim was for:

Now you are presenting numbers for A57, the higher performant "big brother" to A53. Sure A57 and A53 often come as gib-little systems, but please make up you mind here.

Especially for ARM, there is also a huge importance on the I/O capabilities of the SOC - the CPU side might be fast, but that doesn't necessarily translate to fast routing capabilities (x86 is more uniform in that regard, without much variation, making it easier to guess/ extrapolate the performance of faster/ slower systems).

Very simple example, the mt7622bv based e8450/ rt3200 vs the ipq8071a based ax3600 - both are (almost) clocked the same, both are using cortex a53 cores (two vs four, but as routing is inherently single threaded, that doesn't make that much of a difference in terms of shear routing throughput (in terms of servicing wired- and wireless, as well as VPN and similar topics concurrently it certainly does)). On paper, ipq807x wins (two more cores, higher graded wireless, usually more RAM), in practice mt7622bv has a better I/O setup (and much better optimized drivers, with offloading capabilities supported by OpenWrt) and does beat ipq8071a easily. Now if the dormant NSS cores were supported by OpenWrt (and really supported via the mainline kernel and used to their full extent by netfilter, the crypto core, etc.), that would turn this comparison on its head and literally wipe the floor with mt7622bv (but in this case, the performance wouldn't come from the a53 cores, but the little endian ubicom32 derived NPUs) - but it isn't…

Shared in the hope this might help others make informed choices about running costs vs investment costs.

My DIY ubuntu based core 2 duo router/nextcloud server + docsis cable modem draw ~50-80W as reported by the UPS they are both attached.

Investment cost for the core 2 duo (including a spare nic) was ~$50 USD. Electrical generation cost in my location is ~0.12 USD/kWh (about twice that if you include distribution costs, fee's taxes, etc.) So about $50-$100 per year in energy costs depending on how I want to view my electrical cost (some of the distribution cost is based on usage, the other fixed costs I have to pay regardless of consumption).

I am running two AP's, an r7500v2 (running openwrt - $60 used) and an old Asus n66u (bought new, do not remember what it cost, list price is $90) but I don't have power consumption measurements for those.

My home network is mostly a hobby but I am completely addicted to the stability, ease of updating, and flexibility the "DIY" router provides.

My total Power consumption is mostly 10-11 Watt all three devices.

Each device individually or all three combined?
The graph looks like combined, but the number is surprisingly low.

Mostly all three devices together 11 Watt not more. Energy in Germany is very very expensive 0,53€ kwh.

Depends, some contracts are still on last years reasonable ~25ct/kWh and some new contracts want ~100 ct/kWh...

Reminds me, I still want/need to measure energy consumption on my raspberry4 (on 32bit raspbian) doing duty as GPS-disciplined NTP server... (got side-tracked into measuring the entertainment devices stand-by power draw, not pretty*).

*) I admit that I had been pretty cavalier about energy consumption in the past, but I think independent of the current immediate cause for looking to minimize power consumption, it is something I want to be more attentive to and consider it at least equally to convenience.

Still that is a low total... nice!

I noticed, that the initial table doesn't grow. Is this thread dead? Nobody interested in the subject?

Well, I added two entries over the weekend, so not growing is not strictly true. But yes, gowth is not fast, feel free to add data though.

Can you add the following data (I fear to destroy your table):

Can you add the following data (I fear to destroy your table):

Well, it is not "my table", it is our shared table. That said, I am happy to enter you data

Thanks a lot, I appreciate your help.

DD-WRT has Power Input [V/A] as part of their supported devices list.

Maybe this list could be re-used and added to OpenWRT's database of supported devices?

That only tells you the rating of the supplied PSU, not the average power draw - which is significantly different from the maximum PSU ratings. Just as a very simple example, each USB 2.0 port needs to be able to supply 0.5A (for each USB3 port this rises to 0.9A) at 5V, which means for two USB ports the PSU needs to reserve 1A (or 1.8A) just for that on top of the maximum power draw of the router itself. As established earlier in this thread, the idle power consumption is the most relevant figure for evaluating the average power draw 24/7, even though the power requirements can fluctuate quite significantly according to the system usage on modern ARM or x86 SOCs and 802.11ac/ ax radios.

I'm not saying that these values are useless, they are relevant for finding replacement PSUs, but they're very different from the essence of this thread - which is more about evaluating how much running a device 24/7 will cost you over a year (with rising energy costs in mind).

thanks for sharing this! Got another one to add, because I was curious.

Thanks, I included your data in the table at the top, making a few small modifications (replaced , with . for decimals). I also changed 240@50 to 230@50 since I assume you are based in Europe, where the nominal AC voltage for residential power is 230 (see here). If you are truly using 240@50 please let me know and I change it (feel free to directly edit the table above).

Here's something interesting that I just discovered.

I got one of those Chang Wang mini-PCs with the Celeron N5105 CPU and 4x 2.5Gbps NICs, just for fun. Initial setup was with release 22.03.0 x86 generic squashfs efi, did basically nothing to the config other that sort out the NIC ordering (eth0=WAN, eth1-3=BR-LAN), installed the usual suspects (htop, iperf3, nmap, conntrack, tcpdump...) and started just poking around to see what's there.

The power meter sits at around 10.6 W during idle with a single NIC connected to a 2.5 Gbps port on one of my switches. I run it for a day and this doesn't vary, 10.5, 10.7, always right there for the dozen or so times I checked. htop shows that absolutely nothing is going on (htop itself at occasional 2% CPU, everything else at 0%, which is not surprising since the router's LAN is empty).

This morning I decided to run snapshot builds on it, so an auc -b SNAPSHOT later and I'm up on r21392-ada4d0d0ab, which of course upgrades from kernel 5.10 to 5.15. An hour or so later, I glance at the power meter and it's now sitting at 8.9 W. I do some speed tests through it to jump power use up (14 W on speedtest download), but it comes back to idle at 8.9 every time.

So, does anyone have any speculation as to what got changed in the kernel that would improve power use by 15%? The clocks were and are all hovering somewhere in the 600 MHz range, so no apparent change there. I verified that I'm using the same scheduler, powersave, so that didn't change, but did the underlying code in the scheduler, or maybe it's a driver update for these newish Intel Jasper Lake processors?

(Yes, I'll collect numbers for the table, but I've only had this thing running for a day, so no data yet.)