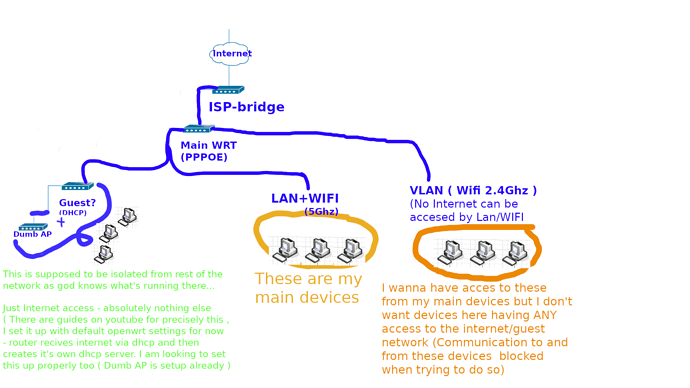 Cameras will connect via wifi 2.4ghz only
Guest router will be connected via cable to MAIN WRT router - then it passes connection to it's own DUMB AP via cable as well

I am complete newb when it comes to this... Didn't even setup guest network properly (xd ) for I wasn't sure if It would have to deviate from youtube videos due to my requirement of having another offline vlan (I am reffering to these videos for guest setup)

I read up a bit on this and also found this - link- which looks like it could apply here? Again idk...

Would someone be kind enough to offer steps on how to do this via luci/ssh ? :z
Like how to setup firewall , interface and such... Ty 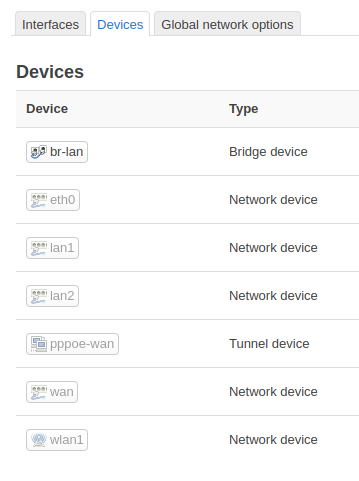 Will try to check this thread every 15-20min o.o

Your device does have a hardware switch, but it is now using using DSA instead of swconfig (so no more 'Switch' menu). Here's a tutoria for the new method, and you'll also find many threads on the topic if you use the forum search.

For your isolated camera network, if it is wifi only, you don't even need to worry about DSA, just create a new network and then setup a wifi network that is associated with that network. This new network should be placed in a new firewall zone (call it the camera zone) that does not allow forwarding to any other networks. You will, however, want to allow lan > camera forwarding.

What needs to be broadcast by the dumb ap at the bottom left of the picture?

Ty for the reply!

At the end of my original post I have links to all 3 routers Im using:
Mi router 4 - v1
And Mi 4A Gigabit edition ( 2 of these for guest )

Guest networks are separate as in completely different wifi ssid grom my own network ( Main wrt ) I did try to make them as close to mesh as possible in between the dumb ap and main guest router ( I enabled fast roaming , disabled dhcp on dumb ap )

Dumb ap is there just to extend signal of guest router

All routers are on latest openwrt

At the end of my original post I have links to all 3 routers Im using:
Mi router 4 - v1
And Mi 4A Gigabit edition ( 2 of these for guest )

Sorry, I missed that detail when I was reading your OP. Thanks for clarifying.

This is required, so this is what I expected. But my question is if all 3 devices will broadcast the guest network?

What do you mean by this? A mesh network is defined by using a wireless backhaul... many times the term 'mesh' is incorrectly applied to refer to the ability for client devices to roam from one AP to another... mesh networks do enable roaming, but roaming can happen without mesh.

Dumb ap is there just to extend signal of guest router

Does it need to broadcast both the guest and main SSIDs, or just guest?

Are the APs all wired together, or are any of them using a wireless backhaul?

Also, I'd recommend setting up the guest network on the main router -- it is easier to administer your network if the main router does all of the routing and firewall work, and then the other units simply operate as dumb APs.

Um the distance between routers makes it impossible to use one for all.

So I figured I'd buy Guest router and connect it to main wrt router ( Guest router gets internet via dhcp , cable plugged into it's wan port ) so they can have their own internet and I won't have to worry about what they are doing online.

Later on they wanted one more router for better wifi coverage.

So dumb ap would only transmit guest ssid. It shouldn't interact with main router at all.

The main router will be a better place to create a guest network, and then send that over the wire to the 2 devices that broadcast the guest SSID.

I followed this video to set it up: 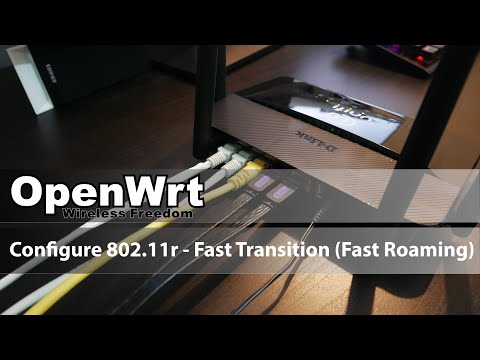 I understand how the dumb AP is setup... but my point is that your guest network doesn't protect your main network

I understand how the dumb AP is setup... but my point is that your guest network doesn't protect your main network

I should really read that guide u sent over xd

Will ask more after reading , but right now I really do not know HOW I'd create or pass it over cable to those 2 routers x:

Even moving my main network onto a VLAN so subnet could be setup... I didn't know how so I postponed guest until I can figure out offline VLAN first for cameras

For your isolated camera network, if it is wifi only, you don't even need to worry about DSA, just create a new network and then setup a wifi network that is associated with that network. This new network should be placed in a new firewall zone (call it the camera zone) that does not allow forwarding to any other networks. You will, however, want to allow lan > camera forwarding.

I am figuring out how to use quote reply z.z Even got a quick tutorial as a popup xd Will fix other replies soon...

Anyways can we start from here?

Where exactly do I add new network?
Network >Interfaces 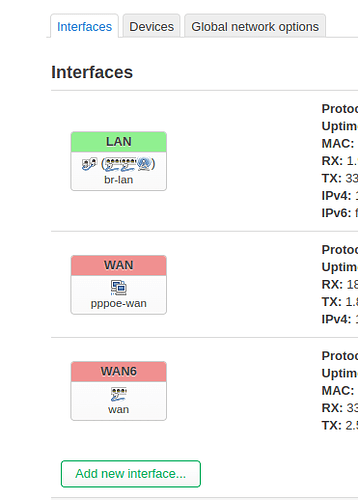 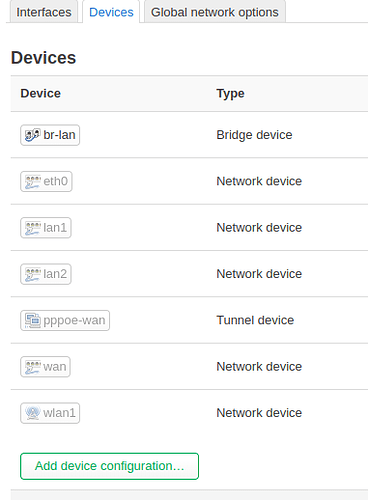 It appears that you are getting confused about VLANs and subnets.

subnets are an aspect of VLANs, but VLANS are not technically required for different subnets to work. This explanation might help.

You will ultimately want 3 subnets in your configuration... one each for your LAN, cameras, and guest network. The cameras are all wifi (from your description), so you don't need to do anything with the wired network configuration... it should be the easiest one to setup. I'd start there.

You can use this guide to create your camera network (despite the fact that it is for a 'guest network' -- the idea is the same except you'll isolate it from the internet, too). The screenshots are a bit out of date, but they should be sufficient for you to understand the general flow.

I was gonna ask for some more help xd

I followed it up to this: 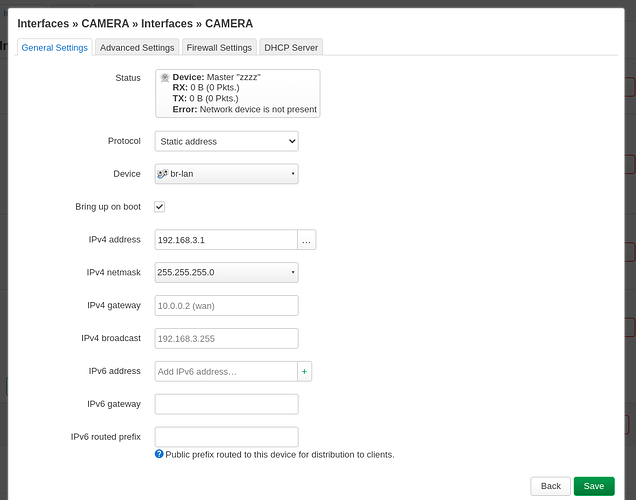 DHCP is enabled
IDK if I picked right device here in the interface?

Now I am stuck on firewall part o.o What do i do here xd

That all looks good so far. Go into the lan firewall zone and allow forwarding to the camera zone.

What do u think?

Does first one look good 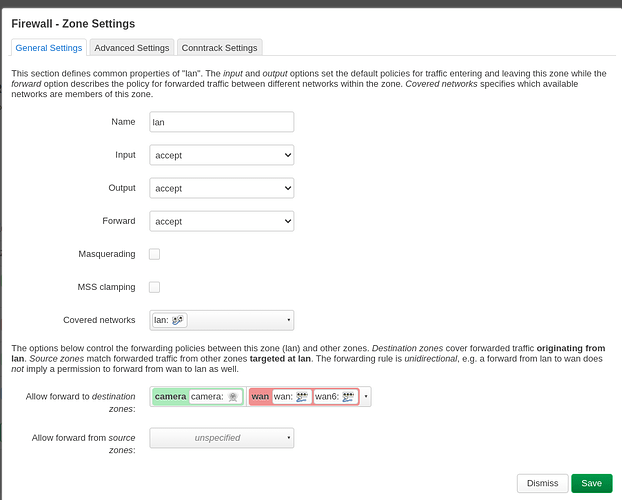 or the last one is better? 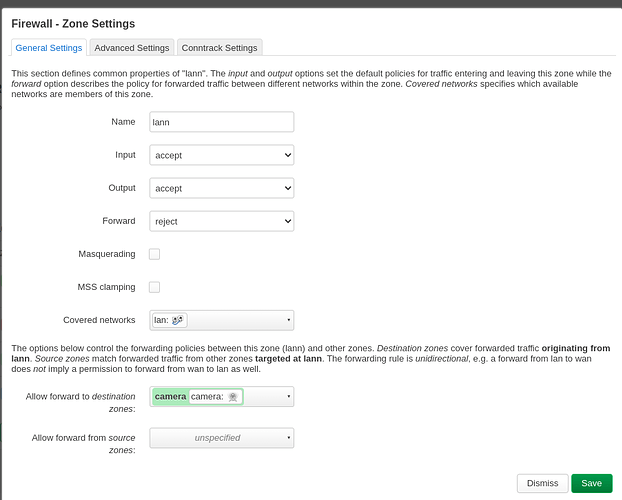 I have no ideas what to accept/reject btw

Btw that camera>reject . Should it be left or deleted?

This looks good. Test it and make sure it works.

Once proven, we can make one other change to secure the router from the camera network.

I connected to wifi from phone and there's no internet ,pinged phone from pc and it's getting through?

This is how firewall looks after I deleted last option

That prolly explains such bad results on ping idk? Will try bumping it up 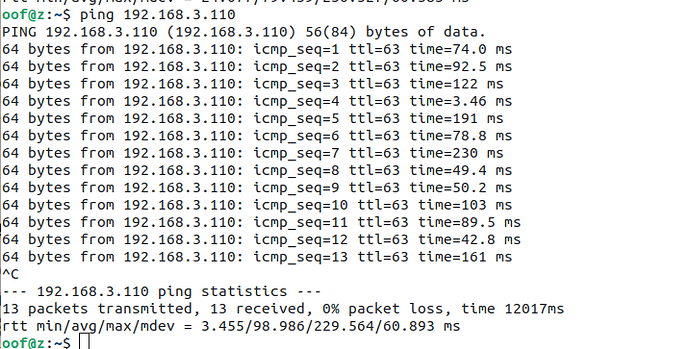 No loss now but ping is looking pretty bad o.o

I prolly stopped in middle of the ping hence why it failed.. my bad

I honestly don't mind the lag , it's a bit on the large side tho o,o 100ms of ping , is cpu getting hammered perhaps? I'll check with top

I connected to wifi from phone and there's no internet ,pinged phone from pc and it's getting through?

This was your goal for the camera network, correct? if so, that's good.

This is how firewall looks after I deleted last option

looks fine. If you want to prevent the camera network from accessing the router itself, you'll do 2 things:

Regarding your power levels and ping times -- it may be related, or maybe not.
Many devices try to save power by not having the wifi radio kept on at all times. They will power down the radio for short periods, then wake it up and do stuff, and then power down again. At a human scale, it appears to be on at all times, but it when there isn't a lot of network activity, it is actually off for enough time that it saves energy. This causes ping responses to be slow on those devices.

However, if your radio power is too low, that can affect things. Also, keep in mind that the power levels for the radio are the same for all SSIDs that run on that network... so you may also be reducing the power of your main LAN's SSID, too. This is okay (and in some cases, preferred), as long as the power is sufficient to cover the desired area/range.

...just that I would defer the optional optimizations (power levels) until you have the basics working and proven, one construction site at a time.