Please support me building a custom firmware for GL.AR300M

Hello everyone.
I finally resort to disturb this forum after many months of failed attempts, but hope to receive some "noob-proof-indications".

Some months ago I found a blog, managed by a user called @bugsysunday, who claims he managed to create a working clone of Wifi Pineapple nano. I won't lie to you. This is all about a Pinepple clone, that I'm drooling about.
I found this archive, uploaded on mega , and on his blog he just says "get osboxes". I reckon he means the archive is here for ease of compilation, with all needed sources included, but I'm a noob, and I don't know about compilation.

I even contacted another capable man, called @adde88, because BugsySunday says his work is based on adde88's work. Unfortunately I didn't receive any response from anyone, and I'm walking since months in the dark.

I'm soo noob that it might even be so simple to rename the archive in something called "simsala.bin" and be able to flash it on the AR300M with success, but I don't know.
Please, can someone tell me what am I looking at since months? I already bricked many routers, trying to build uptodate sysupgrade images for very old routers, but clearly I'm not very clever at this.

I can hazard to compile, yes, but only with step by step indications, as I basically don't know enough of linux and openwrt to master such a process and get creative with it!

I'm aware this topic has some degree of inappropriate, but maybe only in the common world, and not here on openwrt forum.

Thank you a lot for your time, you that are reading this. I'm waiting for any suggestion, and will be more than appreciated.

P.S: I attach a snapshot of the files included in the archive, so you can have a look. 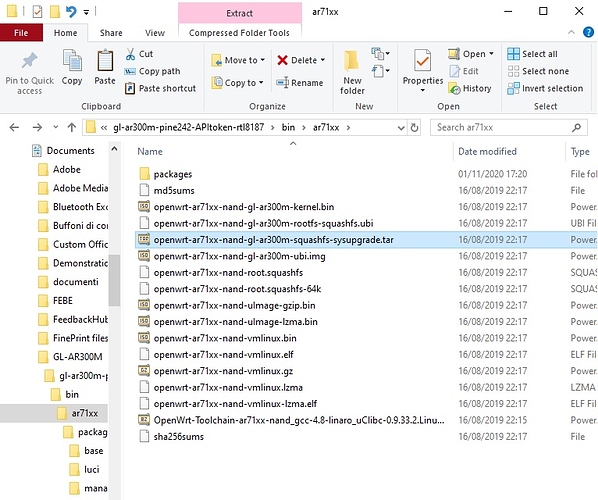 Hello...
is there anyone who can shed some light?
Tonight I tried downloading "the buildsystem for OpenWrt CC1505 with updated GLI patches, including GL-AR150, GL-AR300, GL-Domino, GL-MT300N, GL-MT300A, GL-MT750" from here and...
WELL..I just don't know what the heck I'm doing! I hoped I could paste the content of bugsysunday's archive in the "dl" folder and launch some command, but it is not like it.
Then finally an error occurred. Finally.

It was time something stopped me from selecting random options in the menuconfig!

So please, please, if anyone knows how to pull a Pineapple systemupdate.bin from this archive and files, tell me.

I'll keep on messing around, but I clearly need a tip.

My complete admiration for you compiling-people,
Gabriel

Hello vgaetera! I'm glad you wrote.
Indeed, the model is the one you linked.
I flashed a modified version of the NAND firmware developed by q-a-z, to make it become a Wifi Pineapple clone.
Unfortunately, it does not work properly.
There is another version of the clone, developed on github by @adde88 and @bugsysunday , specifically for ver. 2.4.2, and it should be a much bigger improvement over the version by q-a-z, but my attempts to understand the procedure have sistematically failed.

What I'm asking is:
Given the files in the archive by bugsysunday, is there anyone who knows how to compile those files to have a .bin ready to be flashed on the NAND?
I understand Wifi Pineapple is heavily based on openwrt and other free tools created on linux. So, I reckon in this forum there must be someone who knows what are and what to do with these files, and build an affordable clone of the Wifi Pineapple Nano!
@vgaetera, do you know what I have to do?

dude... these instructions are a full double-labotomy of two dissimilar roms...

doubt I would even attempt this with 'intermediate' skills... besides... these things are usually dated pretty quick... and the sources, instructions are usually not gonna apply verbatim if at all...

pineapple is overrated... if you want to learn... build something yourself... besides... underneath 'pineapple' is about 5% of the real config... the rest is just convenient binaries ( +UI for moms and pops )...

Hey wulfy, thanks for the interest!
What do you mean by "make something purposeful"?
I'd like to port the pineapple layer (say 2.7.0.12 at least) on a recent openwrt build, (say 19.07), and learn how to build the firmware to update it once it is needed, but the learning curve is quite steep.

Yes, there are linux distros that do everything a wifi pineapple do and even more, but do they enter in a pocket? The purpose of a wifi pineapple clone is to be extremely portable, and cheap.

Still looking for advices on how to port the firmware on AR300M...

Hi not to put you off, but it seems pineapple has become a commercial product - https://shop.hak5.org/pages/support

So unless you can get the full source code, you will be stuck with a openwrt chaos calmer version code on github?

As wulfy32 and vgaetera have said, what is the benefit from the pineapple of openwrt?

If you want to start off, best learn how to build openwrt and the fundamentals of how the whole platform works, once you have grasped this then look at doing your own custom image.

This is how I started off, but you have to do some research and experiment. It is not as simple as renaming firmware files and hope it works, there is more involved!

I thought the infusions of Pineapple work on top of a CC release.
The point is not how to install openwrt on the AR300M (as it is as easy as flashing any other router I owned in the past), but actually how to cook a custom fw based on openwrt with all the added tools from Hack5.

Anyway, it seems on github there's someone who was able to port even the latest release from Hack5 on the AR150, which is very close as product.

Hope to receive some advices from xchwarze, as they seem to do exactly what I'm looking for, with updated packages.

Hi rassamf,
what do you mean? Install "this"? What this? The plain openwrt build? There are plenty of documents to do that.
This thread is about modifying the fw with additional code to behave like a Pineapple Wifi. Dunno if you're looking to do that or just install owrt.

just compile the packages you need with make files.

Ciao Bricco.
Initially I wanted to understand how to use the files included in the archive by Raimond (bugsysunday).
Then I understood there are more recent custom builds that I can try to port to the AR300M, so ATM I'm trying to do that.

The approach you're suggesting is to just install the tools (for example a PMKID attack) on owrt and use them in the free and GNU way, isn't it?

Thanks for your interest,
Gabriel

yes, use pure openwrt with custom packages, you don't need clone another device to do that.

This is good news!
But the reason boxes like the Pineapple exist is because you can have a bunch of tools in one easy package...I think I still don't know enough of compiling to be able to work out all the interactions between the needed packages...
I wish to be able to do what you say in the future, but I need a bigger know how on building.
Till now, my attempts to use a buildenv have been delusional. I don't really know what I'm doing, therefore it is too early to try and clone a pure owrt version of a pineapple!
By the way, any document you think can be useful in this regard, I'll be happy to study it!

I have a BIG update about this thread. I managed to install a modified version of the Pineapple Wifi TETRA on my AR300M, and it is very promising! It is a port of 2.7.0 firmware based on 19.07 openwrt build.
The endeavour was possible only with the precious guide and tools provided by xchwarze in his github page
Now, I know it is running on the NAND chip, but the image behaves like it is on the NOR chip. Instead of the 128Mb, it shows only a few Kbites available, and I cannot install modules comfortably on the available space.
Can I fiddle with the onboard storage and expand the overlay in some manner? How can I do it?
Is there someone that can help me locate the chips, the free space and make it available to the system?
I can operate in CLI, but I'm not a guru. I need some indications to follow.
Thank you all in advance!

Hi Bricco!
I know you suggested using only owrt, and I documented a bit on the subject, but it looked like there is no GUI to use. The packages always need CLI, but in some situations (on my smartphone for example) having a GUI is a huge help.
I'm close to satisfaction now, but encountered some issues with the available space in overlay.
Any tip?