I've been using this build (rebuilt to include 6rd and a few other packages but no other changes of any significance) as my default router for over a week now. This is with gigabit fiber internet and two routed local subnets. It's rock solid and the performance is excellent:

(Previously when using an x86_64 build on a Sandy Bridge i5 with i340 NICs I was getting a solid 940Mpbs up/down on a fairly regular basis. But we may be comparing apples with oranges: Covid-19 stay-at-home behavior may be affecting area broadband performance generally, there are a lot of tech workers around here who'll be telecommuting now, and a lot of people staying at home watching Netflix)

(Edit: Finally dawned on me that I'm using a single LAN port from the router to a Gigabit switch for simultaneous tests, resulting in a bottleneck that would explain the ceiling observed; so maybe ignore the whole paragraph that used to be here. To do this right all the testing should be done on a bench with no links in common between simultaneous bandwidth tests.)

Anyway, tremendous work. I really like this router now.

Thanks for the custom build, I have few questions,

Hi, tnaks for your questions.

It would be nice to have your results, anyway and if you can, it is valuable feedback to me; since I live in a country where 10MiB/s is a corporate luxury and can not test this kind of thing.
And thanks for using my build and your feedback, always welcome to know more about use cases!

I've done some significant changes and OpenWrt have done other more (like upgrading the kernel) so I would like to know if it still performing good now, I was a bit distracted from OpenWrt due to the virus thing, that's why I didn't updated my repo but if you can test it agan when I upload the new version, it will be a nice feedback to have!

The results above are accurate: the thing I disclaim in parentheses at the bottom of the post refers to something in an earlier version of the comment, which I edited out.

Centurylink speedtest: provided by the ISP and only 1 or 2 ms ping away, so only contending with nearest neighbors for FTTH bandwidth. Includes NAT, firewall rules mostly OpenWrt stock. 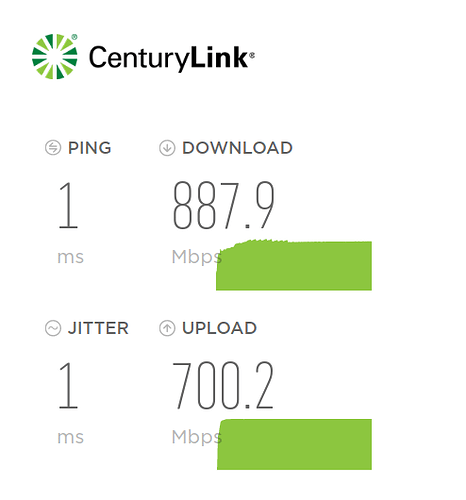 Screenshot_2020-04-19 Internet Speed Test CenturyLink(1)495×530 19.4 KB
(Edit: earlier screenshot showed an unrepresentative 23ms jitter. Just did this one, a bit more typical. Note this is without disabling various other internet using devices such as chromecast, etc.)

Built from your v0.32 release, by git cloning the fork point from the mainline OpenWrt repo and then applying your .oc patches. My only .config modifications involved the addition of packages. Runtime changes, nothing relevant, though for now I've reverted to using dnsmasq (+stubby) rather than unbound, mostly because I need more comprehensive dhcp option support.

Looking forward to your next release, but I'm pretty happy now. The responsiveness is so much better than mainline!

Hmm, I read that you compiled your own version. I have some notes to add:

I'm in the proccess of uploading the package to GitHub, so expect it to be there soon

and thanks for using this custom build and will be nice to have your test to compare against the 11737-v0.32 version, as changing the kernel can have significant performace differences.

For v0.32 I got good results by simply checking out OpenWrt commit 1173719, applying the .oc patches and then using "make menuconfig" to add all the additional packages (not just build-dependent ones like 6rd but pretty much everything I'm ever likely to want, since it's not wise to rely on the snapshot repository.) But it does have to be repeated for new builds if you do it that way, so I'll look at your recommendation for the next one.

As I mentioned over in the switch development thread, I'm becoming convinced that this device cannot route more than 1 Gpbs total (i.e. 500mbps symmetric, for example), and I'm wondering if that's just how Linksys wired up the board or if there's additional internal bandwidth that the firmware doesn't exploit. There's every indication that there's a physical 2gbps link between the SoC and the QCA8075 but it seems like we only get the use of half of it for whatever reason.

If true (and my bench testing suggests it is) then this is in effect a one-armed router plugged into a 5 port managed switch. Not terrible for something you can get for $30 on eBay, but still below its potential.

Normally it wouldn't matter that much; in real life I'm never trying to do a full gig bidirectionally over the lan (and it's unlikely any peer in the real world will give me that), but it does mean that this isn't suitable for simultaneous use as an edge and core router between internal subnets if you move significant amounts data between them.

Hi @NoTengoBattery, thank you for all your hard work on build; have been running it for few weeks without issues. Few items:

If I understand correctly the issues with the device, it is as you think: only one gigabit port goes to the CPU, which mean that the gigabit bandwidth is shared between LAN and WAN in the switch.

Hi, thanks for your interest, let me answer your points:

Nice to see this wonderful device got an extraOpenWRT option.

Does this build have any improvements on this subject ? (since i dont see its mentioned here)
Or do you know any ways to tweak the 2.4ghz radio ?

Let me tell you a bit of what happened time ago: at the beginning of the development, the 5 GHz radio was totally useless, bad signal strength and poor connectivity.

With the time, my investigation on the subject gave some good news to the device: 5GHz was useful, comparable to the OEM performance and sometimes better.

What did I do? Well, I tested what's called "calibration board files". The driver load those files to the wireless chip in order to overcome the physical differences that may degrade the wireless performance or make the device irradiate more power than allowed by law.

Linksys provide several of those files because it looks like there are some hardware variants for the design.

Answering your question: my build does contain the same calibration as the OpenWrt original (as I sent the files myself to the Linux Wireless developers), however, my build also contains a script that allows users to change the files in order to test all of the ones provided by Linksys. You should have to test them manually, one by one, as I have no way to know what should be correct for a particular device (I sent the file that best fit the majority).

You can install this build, run the script to test a particular calibration, perform some benchmarks, and proceed to do the same with the rest of the calibrations till you find the one that performs the best.

More details about the calibration testing script, of course, in my GitHub repository. The script is pretty straightforward to use, you call it once to list the options and then you call it with the file you want to test as the only required argument to the program. The device will reboot upon successful change operation and will load the new file to the chip during boot.

P.S.: I just checked my OP and it does say about the script in question.

Thanks for you thorough reply.

I tried changing the calibration board files and didn't notice any major changes, maybe i did it wrong ? or there should not be any big difference between them ?

My unit 5ghz reception is the best i have seen , but 2.4ghz reception is quite bad (about 10-15 less dbm than my old archer c2) , and worse than 5ghz on same spot from same unit (about 5 dbm less).

I see the 2.4ghz uses 20dbm (lowering it does lower reception) transmit power and 5ghz uses 23dbm , maybe there is a way to set 2.4ghz tx power to higher value (although i know it generally not recommended).

Is my reception experience matches yours or any one else ?

Well, I'm aware of the problem. I've tested some more calibration files (not present in the firmware, I have the only copy) and I want you to test one in particular.

Yes, there should be a noticeable difference between some files, other files perform almost the same. If you tested all files right, then when the device booted after performing the command testcalibration art, your 5.8 GHz wireless radio will stop working.

Please, download the attached file and copy it to the device, replace the existing file in the /lib/firmware/ath10k/QCA4019/hw1.0 path with the providen here, reboot the device and tell me about your performance.

Also: try to go to LuCI and in the Wireless page try to set up (manually) the wireless power to 30dBm.

I think that the problem here is that the calibration files does contain wrong data about the antenna gain. However, I have no idea of what the format of the files is, how the data is stored and it looks like there are no tools to inspect or modify the files. The only thing we can do is test the files that Linksys included with their firmware.

Firefox Send files do expire after a number of downloads or when the time is due. This link is, therefore, short-lived.

Encrypt and send files with a link that automatically expires to ensure your important documents don’t stay online forever.

Replaced the original file with the file you supplied and 2.4ghz reception is up to the roof...

Got about 25dbm boost on all my devices and 2.4ghz reception is now much better than 5ghz (as it should).

Also i dont experince worse 5ghz signal like you described , from try to set 40mhz on 5ghz and not 80mhz and you should get better signal.

I will countinue to check for a few days that there is no side effects , but it really seems promising.

The wifi is working just fine for the past 3 days , 2.4ghz is great here and also 5ghz doesn't seems to suffer.

I have also tried it. It brings new life to 2.4ghz, but i did notice the laptop wifi signal drops a few bars and then back up again on 5ghz

So if I understand correctly this file does improve the wireless performance, am I right?

As a side note: during the process of finding the file, I did tested all the remaining calibrations and this is the best of all (for 2.4 GHz). If this file does not improve the 2.4 GHz quality, there is nothing more that can be tested now.

Thank you for your work on porting wrt to this device. If i have to choose which calibration board file, then I would use your latest. The one in 'firefox send'

I see. So in the sake of the reviews for the file, I'll be including it with my next prebuilt. If I don't see any problem with the time, I will send the files to the Linux kernel developers so they can update the OpenWrt's version.

Note that OpenWrt does not manage the ath10k calibration files, is the Linux people that does that directly. Therefore, changes will take some time to reach the official build.