I have an Asus RT-AC1900P router.
Do I have to install RT-AC68U OpenWrt firmware on this router?

Specification of both routers:

And if the router RT-AC1900P does not have support for OpenWrt, can you please support it, maybe this information will help you:

Commits to support the RT-AC1900P in Tomato:

I don't know how to do it, I don't even have the basic knowledge of how to get the above information.

I hope your understanding and help.

It's not supported and in all likeliness never will be, as there are no drivers for its wireless cards.

as there are no drivers for its wireless cards.

The WiFi is not necessary, I just want it as a router.

If the RT-AC68U is supported, why can't this be supported?

Techdata: Asus RT-AC68U Devices with Broadcom WiFi chipsets have limited OpenWrt supportability (due to limited FLOSS driver availability for Broadcom chips). Consider this when chosing a device to buy, or when deciding to flash OpenWrt on your...

In general, OpenWrt doesn't 'plan' to support any devices at all, device support happens if an interested developer or advanced user buys a new device for their needs and invests the time and effort needed to port it over to OpenWrt, which -depending on the device and its similarity to already supported ones- may take from a long and rainy weekend to (more likely) several weeks (months) to succeed. Quite a few devices will never quite make it, others may take several attempts from multiple parties building on top of each other's findings. If you want OpenWrt support for your device, the only reasonable choice is to pick a device that is already supported (at least in master/ snapshot), everything else is a gamble with varying chances of success (and no schedule attached); even devices that are looking close might still pose insurmountable issue during the last steps of their submission process.

Considering that this device has no chance of ever getting wireless support, no one sane would buy it with OpenWrt in mind and then spend the considerably efforts to get the basics supported.

I downloaded the RT-AC68U OpenWrt firmware from here: https://firmware-selector.openwrt.org/ and installed it on the RT-AC1900P.

How do I know if the router is working without problems?

Info about the CPU

It is very often that some devices are supported and we don't know about it. This is most often caused by manufacturers using the same chips across routers cause of lower development costs and mass supply discounts, between some router variants there are the same PCBs used and just some chips and their components are just unpopulated, this is all to reduce costs. As long as it's the same cpu and similar components around then they use the same or very similar boot-loader thus firmwares for one board work on another. Just look at what features does tomato have and what openwrt have and you'll find what is missing and then you'll just have to compile with the buildinfo of the RT-AC68U and add the drivers required.

Just look at what features does tomato have and what openwrt have and you'll find what is missing and then you'll just have to compile with the buildinfo of the RT-AC68U and add the drivers required.

The truth is that I thought I was going to brick the router.

I don't know anything about Linux, I'm a Windows user.

If the people who have the knowledge to do what you recommend do not help me, I will continue to use the firmware of the RT-AC68U on the RT-AC1900P, the only problem I found is that when I try to change the mac in wan interface, it doesn't work (Override MAC address).

The truth is that I thought I was going to brick the router.

So you made a calculated bet. And you got lucky.

Run some tests, put it through its paces, check if anything weird pops up in the logs, and if not, be happy that you have OpenWrt running on it. Like @slh explained, the chance of it seeing a dedicated image are rather slim. You might have lucked into a clone being supported already.

I have two days with OpenWrt and it works without problems (Only 'Override MAC address' in wan interface does not work).

I am grateful to the Developers, but I really wish my router had official support.

Only 'Override MAC address' in wan interface does not work

I hope that one day the Developers support the RT-AC1900P router.
https://firmware-selector.openwrt.org/ 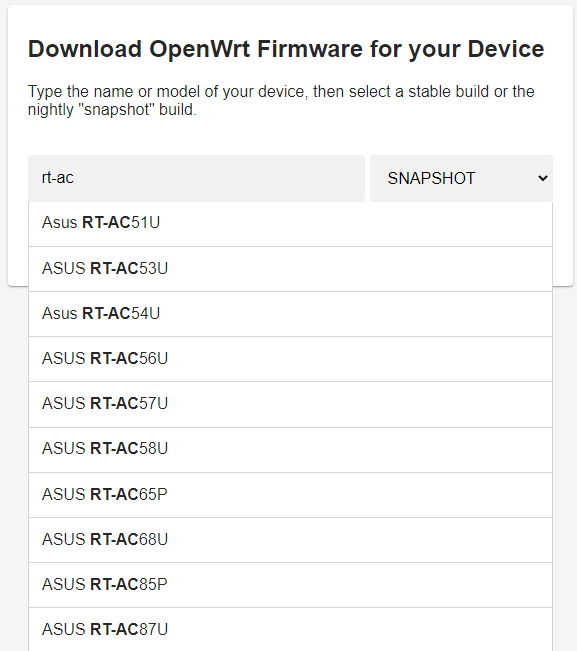