i think if board pin is labeled "3v3" it has to be 3.3v, so if i configure ftdi to work at that voltage it shouldn't be a problem

i know every devices must have common ground, but anyway... how it's supposed to make work 2 different devices at same reference (positive) voltages if i don't connect them each other??.... i thnk they won't work with just "gnd" connected

thanks for your advice

In the typical case of router and usb2serial adapter, 3V3on the router and Vcc on your USB2serial adaper provide power (+3.3 VDC), this causes two issues:

(as you don't seem to listen to us experienced)

thanks for your best wishes..... i dont believe in obeying blindly to experienced people, i believe instead in to transmit knowledge and learn...

spread knowledge and experiences, teach and learn together... maybe most of the current humanity problems are based on obeying blindly to "authorities" withouth questioning

.... but if i lost my patience and throw that piece of "waste" against the wall.... at least i had fun and learn something

maybe that's the way when the devices have both its own power source (i imagine a broad stream of electrons flowing through gnd cable)... or maybe not? .. how does that work?

thanks for your best wishes..... i dont believe in obeying blindly to experienced people, i believe instead in to transmit knowledge and learn...

Trust me, I also do not believe in that at all. However, I do listen to experienced people at times

Anyway, by R210 and/or R213 I meant that they are missing. But who knows what exactly they might be used for. However, some clever manufacturers sometimes "lock" their devices by just not assembling some zero ohms. Now some advice on how we experienced may go at it if we get a board where we have absolutely no clue which header, test point, or even pad might be a serial UART. We first use a regular DMM to probe our way across the board to judge where we find ground and where certain fixed voltages. Then, using a logic analyzer or oscilloscope you may analyze them signals which are not just constant/fixed to get a feel of what might be e.g. a serial UART. In your case, I would also probe around those R210 and R213. The advantage of using such tools rather than directly an FTDI is also that you will get a reading regardless of the baud rate. Then, at least a nice logic analyzer (I mostly use a DreamSourceLab DSLogic U3Pro16 nowadays) will tell you the baud rate and even allows decoding whatever it might be (e.g. I2C, SPI, UART, whatever). Of course, in the first order, this only allows you to find TX signals (e.g. where something is sending). An additional benefit is that the voltage level does not matter as such logic analyzers have really nice input stages and work with the tiniest levels and are usually save for use up to at least minus to plus 20 to 30 volts.

if i do some question it doesnt mean i distrust you , but that i want to know why instead

i could try to probe the r210, r213 etc, later in spare time with my tester and see what happens

more info (new news): lit looks like a rebranded device = http://www.comnect.com.cn/VDSL/DS244WTV.html ... it seem this manufacturer sell this router to many rebranders/resellers

Yep, that concept is called OEM aka original equipment manufacturer. E.g. a lot of even big companies like Cisco or HP let their products be designed by such OEMs. I used to work for one major US one in the field of document capture, scanning and we e.g. did stuff for Bell+Howell, Canon, Fujitsu, Kodak. You named it. When one of them came on-site for visit we had to throw a blanket over the other prototypes not to reveal what we were really working on

more info; lit looks like a rebranded device = http://www.comnect.com.cn/VDSL/DS244WTV.html ... it seem this manufacturer sell this router to many rebranders/resellers

BTW: Spec wise it looks very similar to the BT Home Hub 5 Type A which is one of the very easily and even more cheaply available (at least here in the UK, Europe) fully supported OpenWrt devices. By fully supported I mean incl. vectoring VDSL2 which I believe that chip set is the very only one even being OpenWrt supported. This just to have some context. If you would manager to get that Triductor thing going you would be only the second human being on earth which managed to achieve such feat

seems this is a picture of comnect's offices reception.... i can distinguish entel and claro logos as chilean isp's... can recognize others too as agl, an australian isp that uses it also, that i knew when i was searching router info, etc 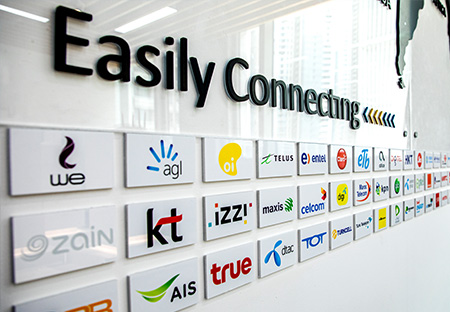 yeah funny, but this actually will diverge us from the central topic