As I have gigabit internet, I want to be able to get the full wifi speed cumulated. I was testing this via speediest.net and via iperf3 (10GBit/s servers), i.e. running speed tests at the same time.

For case 2a) where there are two distinct wifi cards built-in I would have expected these work independantly of each other (each wifi card being on a separate VLAN, separate ethernet port).
(If I connect each lan (vlan resp.) on a separate AP I get the cumulated 1 Gbit/s speed as stated above)

I was testing this via speediest.net and via iperf3 (10GBit/s servers)

are you aiming for a controlled test? ( accuracy )? why do you make no mention of CPU/interrupts? are you confusing testing wifi with more variables? if so, why have you not included control tests bypassing wifi entirely?

Thanks a lot for replying and for your questions.
I'm not a professional in this area. I hope you can help me whether I measured incorrectly or where I have a bug in my settings.
Maybe my topology helps.

Considering myself as a layman, I'm stuck at the moment with
a) understanding what I could have made wrong at testing
b) understanding how OpenWrt works and how / if you could find a solution to use only one AP for both LAN and VLAN and get out the most (especially if I could use the APU2E4 with two wifi cards inside).

I've read your two post two times and i do not fully understand in what you are interested or what is your issue.
Can you clarify your question/issue?

Thanks for your question and your help in advance.

Is my goal clearer now

?
Can you help me to understand if this is achievable or if there is a limitation (by OpenWrt routing or chipsets or wifi drivers) ?

Hmm... I can follow your explained observations and reasoning.
But i do not understand what should be wrong with your explained experiments and what do you think is an OpenWrt limitation.

btw with a single WLE900VX you can achieve around 560 MBit/s download and over 600 MBit/s upload wifi speed with an iPad 5 (every time !).

You are approaching the theoretical max you will get with a 2x2 client running 802.11 AC on a 80Mhz wide 5ghz channel.

The problem is the client, not the router.

To get more speed you need the client to have more antennas or be able to support wider channels (160mhz).

I would understand if it was in a single wifi card, but it‘s two distinct wifi cards.
So it looks like OpenWrt is ignoring that it‘s two cards ? Why, what is the reason ?

Yes exactly, two iPads, each on a SSID,
each SSID on a different channel (36, 80 MHz and 52, 80 MHz) as it‘s two distinct wifi cards (mini PCIe) on a single AP (the APU2E4 with 4 cores and 4GB ECC RAM, you can put two mini PCIe wifi cards in it, plus SSD, plus HDD if you need, and a few USB ports if you need to plug in more stuff https://www.pcengines.ch/apu2e4.htm)

So I‘d expect the wifi cards work independently of each other. But it seems OpenWrt handles them as one, for whatever reason I don’t understand why ?

btw, the APU2E4 can easily route 1 GBit/s with OpenWrt

With route you mean to route different subnets over different ethernet cards, right?

802.11 (wireless lan) != 802.3 (ethernet)
So you can not assume that routing from a ethernet adapter to a wireless adapter has the same reqirements.
This two protocols are very different and transmitting frames between this two protocols needs some cpu power.
Have you ever checked the system utilization on such a iperf3 benchmark?

The two cards are likely jamming each other. The receiver isn't designed for very strong adjacent channel signals.

Not sure if I understand.
The APU2E4 has 3 NICs (3 x i210AT, each has several lanes). On the first i210 I put LAN, on the second the VLAN. Each NIC has a wifi card counterpart.
Do you think, the ethernet to wifi bridges could be a limitation ?

Thanks for your reply.
I tried also channel 36 and 100 on the other, same result. Do you think that the broadcasted signals are detected (assuming in the low dBm range still a signal) by each card from the other band and therefore jam each other (although each card is connected to 3 antennas, but yes cards are a few mm from each other) ? 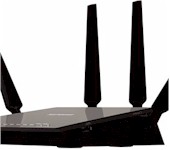 SmallNetBuilder provides networking and IT news, reviews, help and information for professional and prosumer home, SOHO and small business users.

940mbps / 2 clients = best case 470mbps each client (CPU limitations and interference will prohibit you from reaching this).

Wifi has overhead and interference issues, as more devices start competing for bandwidth on the same channel it gets a little more crazy and you don’t get the bandwidth you were hoping for:

I made a poor man's repeater out of my Archer C7 by replacing the PCIe 5 Ghz card with another Atheros 2,4 Ghz one so that I had onboard 2,4 Ghz in parallel. Even though it worked and I used an external Antenna meters away, performance significantly degraded as soon as I used both in parallel on different channels. I assume that would be also the case if you just try to use two 5 Ghz cards. Either go as suggested for 4x4 mimo or 160 Mhz if you need that much bandwidth.

Have you looked at the CPU usage on the AP when you are not hitting the speed you expect (with something like htop)? Maybe it is running out of CPU?

I've made now the same experience as JevermeisteR and mk24 explained.

Result: The cards or rather strong signals are jamming each other, even if you put channels 36 and 116 (or 132), as the farthest possible (in my country).

Only solution: Put the two emitters (AP's) approx. 2 meters from each other with least spatial beam intersection.

It was easy to measure (using iperf3 on notebooks).
a) two identical AP's, two different SSID's, each set with 5 GHz, 80 MHz BW, but different channels (sub-configs: main frequencies close and far from each other, i.e. extreme cases)
b) two notebooks, first notebook wireless connected to first AP, second nb to second AP, both notebooks with iperf3 (unixoid OS's)
c) distance between AP's, whereas antennas were all time parallel to each other (for the spatial beam direction, short antennas meaning large emission angle)
-> started with "0m", 0.25m increments up to 2 m (my current cable was too short to go farther, practical limitations...)

In my case it was not the CPU (thx for the hint juppin and Gnufsh).

Thanks again !
This means I'd need two AP's with a certain distance or maybe a 4x4 powered AP (thx ACwifidude and JevermeisteR)

I will dump a bunch of links on you, since i have played with Archer A7 v5 (same hardware as C7 v5) to understand it's bandwidth limitations. Being a single CPU router, CPU irq handling is the limiting factor.