Can someone help me with Thomson DWG874B, it's realy bad and I want to install OpenWrt or just update the firmware, how can I do that? 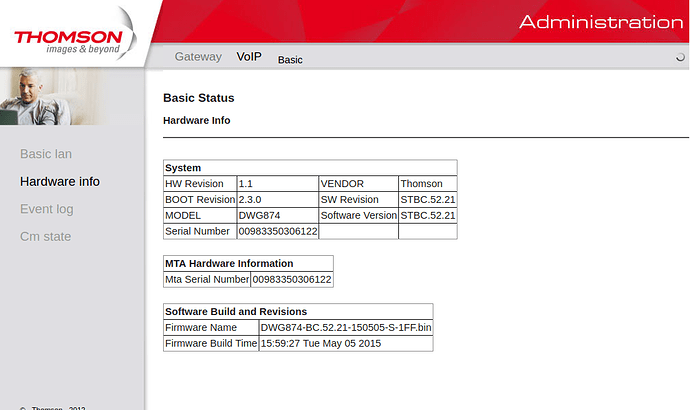 What does the ToH say?

This seems to be a DOCSIS 3.0 cable modem/ router/ VoIP gateway, but OpenWrt can't support that (cable modems do need to cryptographically authenticate themselves and their running firmware with certificates to the ISP, so that's a no-go to begin with). This means while the device might be supportable, the cable modem functionality can't ever be (by definition, there's no ISP going to accept an unsigned/ self-signed firmware on a DOCSIS modem). The next problem is going to be the SOC and its peripherials, cable modems are basically only produced by Broadcom (yes, with a tiny market share for the Intel Puma chipset, and fractions for specialty manufacturers), while I can't find hardware specifications for your device off hand, chances are very high that it's using a Broadcom SOC, wireless and peripherials, modem, and VoIP cores. As mentioned in the link above, there is basically no support at all for Broadcom wireless chipsets above 802.11g (54 MBit/s), so it's safe to consider the wireless capabilities to be basically unsupportable (or at least barely so, unstable and limited to 54 MBit/s). Broadcom VoIP related IP cores are even worse than the wireless situation, there is no support for those at all, so no phone capabilities either. Coming back to the SOC itself, it's probably going to be Broadcom ARM - and most likely NAND based flash, which is kind of a problem as well, as the boot concept for those requires parts of the proprietary bootloader to be embedded in the (hypothetical OpenWrt-) firmware image. This poses a legal problem, which is the reason why most of these types of devices aren't supported by OpenWrt (the resulting firmware images would be non-redistributable).

So let's sum up the situation, assuming you can get the SOC supported/ booting at all (because of the Broadcom-ARM+NAND hurdles), the device would no longer have support for:

In order to get there, you'd have a lot of work in front of you - with a less than satisfying result - which is the reason why barely any of these devices have any kind of OpenWrt support.

While non-OpenWrt firmwares are out-of-scope for this forum, the need for signed DOCSIS firmware prohibits 3rd party firmware for cable modems alltogether, so you're not very likely to find any elsewhere - leaving you with the official distribution channels only (e.g. Thomson or your ISP via TR-069).

Well supported (by OpenWrt) devices (without included cable modems, if you need DOCSIS, you'll need a dedicated modem in bridge mode) are plenty to choose from, well into the highend domain - sometimes even surprisingly cheap (especially on the used markets).