I have successfully upgraded my wrt3200acm and wrt1900acs from 21.02.0 to 21.02.1. The routers have been up for more than a day.
Everything has been very solid. I noticed that the wifi on wrt3200 has improved a lot in terms of stability and signal strength.
Really appreciate all the work that the dev team has put in. I cannot thank you guys enough.

Good news for WDS wireless bridge. It is working again with this release. (Was broken since 21.02.0 RC4, so, was on RC3)

The device is configured as "Dumb AP". When I test the transition walking around the apartment, the wifi device (a Samsung Galaxy S21) doesn't transition, the AP gives the message "did not acknowledge authentication response" and soon freezes.

Disabling the fast transition seems to solve the freezing.

Fast transition on 2,4 GHz works (althouugh I tested only with WPA2-PSK).

Adblock : shallalist not working on RPi4 - 21.02.0 Installing and Using OpenWrt

Very many thanks to Dev Team !

I know this has been covered, but the more i read, the more confused i get. I'm trying to upgrade a Linksys WRT1900AC from 19.07.7 to 21.02.1. But i get to confusing errors. I'm not going to preserve settings, as i know that won't work. From what i understand with this model Router, I'm facing 2 issues. Issue 1, the change to DSA and the way networking works means you can't preserve settings and is the reason for a warning. But, then i see issue #2 message that the partition sizes need changed and so you shouldn't upgrade. So am i supposed to upgrade with LUCI using the sysupgrade image, or the factory image? I'm going to include both screenshots. There error first says to not preserve settigns, which makes sense, but then the rest of the erorr says to sysupgrade not support and to use factory?
So what is the best way to upgrade?
links to where some of my confusion begins. I tried to research, but read too much to the point i see conflicting opinions. One person stated to use factory, then further down someone says openwrt can brick your device using factory and it's only meant for coming from a factory image to openwrt?
Researched links:
https://forum.openwrt.org/t/openwrt-21-02-0-first-stable-release/105395/25
https://forum.openwrt.org/t/openwrt-21-02-0-first-stable-release/105395/162
The link above is where my confusion sets in, and it appears to have started a debate between factory ans sysupgrade images.
So I guess, can this be done via LUCI, and which image file should i use? And if I can use sysupgrade, why does the error message say to use factory?
Thanks for any help with this. 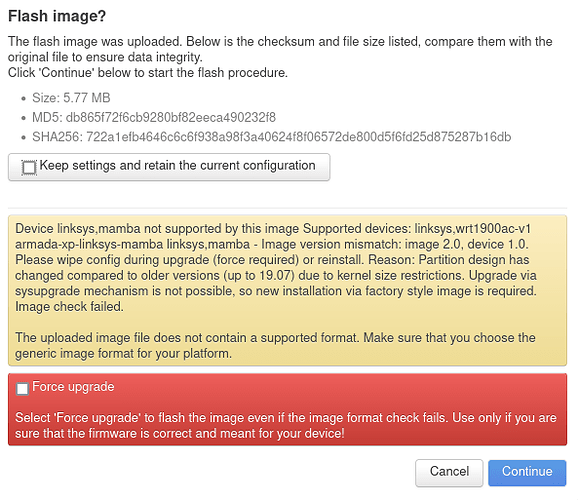 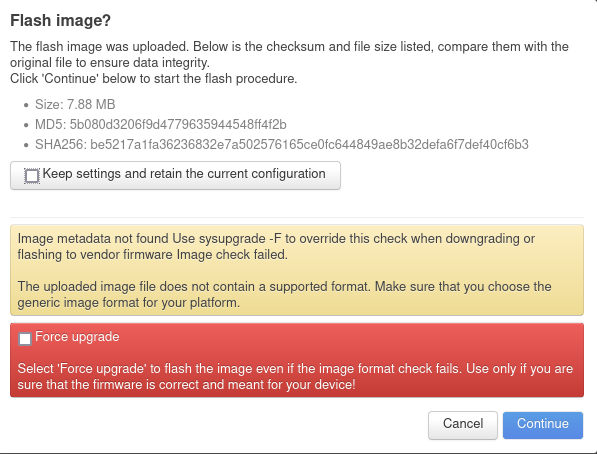 @anomeome and @thuyn789 ,
Thank you. You both confirmed what i thought. The further I read, the more I confused myself.

WRT32...does 21.02.1 offer 10 degrees lower cpu temperature like in master branch? is the lower temperature achievable only with kernel 5.10?

Only a few minor issues, some already discussed in other posts, namely:

Posting my results:
Netgear WNDR3800 19.07.7 upgraded to 21.02.1 preserving settings went smooth. This is only used for a switch and access point. After 10 min of testing, seems good so far.
Linksys WRT1900AC v1 upgrade went smooth. I did NOT preserve settings, and used the factory image to flash. So far the only 2 noticeable issues are a decrease in wifi speeds and wired internet speeds. I've only tested 2.4 on both the WNDR3800 and WRT1900AC, but the WNDR3800 is performing faster in wifi tests. I'm also not reaching my max internet speeds, avg just under 500Mbps, when i should be 800-900 normally (i haven't ruled out isp congestion yet). I'm just reporting my initial observations 20 min into updating. I'll try and research any wifi issues later.
@thuyn789 , you mentioned you updated the same model. Have you noticed a decrease in wifi performance or other speed issues?

My wrt1900acs and wrt1900ac did not have any wifi performance issue but I did notice some stability issues with wrt3200. Inspired by this (credit User34), I implemented some fixes below:

This trick works for me. Idk if it will work for you.

Thanks. I'll do some more testing and such before making "tweaks". I'll let things bake in for a little bit before changing. I'm also using fast roaming, so i need to make sure that's working also. But that will be a little bit later, it's super late in my timezone at the moment, and I should call it a night. Thanks for responding!

I should note, regardless of UI, the pertinent line in my /etc/config/network (specifically, in the "config interface 'wan" block, option macaddr followed by the address) does still exist, but it's being ignored, which may be correct if it's been deprecated. I know it's being ignored by virtue of picking up a new external IP when I upgraded to this version of the firmware. That only happens when changing the MAC.

The spoofed MAC does show in Status->Overview (Network), which is interesting.

Perhaps the "Devices" tab is what you are looking for?
(on the main Network->Interfaces screen, not inside the WAN configuration)

On the contrary, I believe the Devices tab was introduced to handle the new network configuration syntax.

I should note, regardless of UI, the pertinent line in my /etc/config/network (specifically, in the "config interface 'wan" block, option macaddr followed by the address) does still exist,

I suggest removing option macaddr from the config interface section to avoid confusion.
It should be added to config device instead.

Upon visiting the Devices tab, which I never noticed before, I found the MAC to already be there. So, I looked at /etc/config/network again and found that the conversion I mentioned yesterday (the one that happens when first visiting Interfaces in the UI) had not created a config device section for eth1 (the wan). This is despite the conversion making numerous other changes in accordance with the new syntax. Not sure why.

Since the old syntax is still supported, however, it wasn't needed. To avoid confusion though, I created that section you mentioned and moved my "option macaddr..." line into it. And to test that the system recognizes it, I went into the Devices tab and tried changing the MAC. It does indeed change it in that new section.

And my WAN IP changed again, proving that spoofing works.

I should point out that I had a new IP yesterday right away after flashing (and rebooting), several hours before I ever visited the part of the UI which triggers the conversion, so the syntax changes shouldn't have related to my initial problem, though I'm glad it's more thoroughly converted now.

What I guess happened is that despite having the same IP for at least a year, and rebooting the router weekly (if I was going to pick up a new IP, that's when it would happen), I was given a new IP after flashing by pure coincidence. It wasn't because of the MAC, which was the same as it ever was and truly in effect. It would have happened anyway if I'd rebooted that day (or perhaps on any day that week, since I hadn't rebooted since last weekend) even on the old firmware.

I have guest network, VLAN, DDNS, WakeonLan and wireguard. I just installed the packages again. Luci also prompted me to upgrade network configuration and picked up all my firewall rules to block machines based on the mac address. Other old configurations worked out of the box. I would have taken some time to understand the new way of doing networking but automatic switch over is an excellent idea.

< A Big Thank you > to the entire team for saving old routers from the trash heap and making them more useful. BTW No rush but the software offload will be a cherry on the top when you fix that bug.

Out of curiosity, did the conversion give you a section like this for your wan?

As mentioned above, the conversion only did the lan one for me, for whatever reason. Not that that broke anything due to backward compatibility.

So after some more testing on the WRT1900AC, I was able to increase my speed by enabling Software offloading. But i can't remember if i had this enabled pre upgrade. If I did, then that accounts for the speed difference I initially saw and reported above yesteray. Since i couldn't preserve settings, and I had to manually reconfigure everything, I'm not sure what I had this setting previously. I did take a backup before upgrade. Is there a spot i can look in the tar.gz backup? I looked at the firewall file located in /etc/config of the backup, but didn't see an offloading config option set. Do you recommend I post this question as a new topic? As for the wifi performance issue I observed previously, I think i had a flaw in my initial observations. I'm still going to test, and report back any other oddities i find. I do love OpenWrt!
What's also odd, is that none of the system resources seems to spike when doing speed tests. CPU appears to stay pretty low, memory, etc. It seems that 500MB is some type of artificially imposed bottleneck? I really don't think I had software offloading enabled previously, but i'd like to confirm that.

EDIT 2
After some further reading and research, I must have had software offloading enabled previously. I read somewhere it was defaulted in one release, but I can't confirm that. I could have turned it on at some point and forgot about it. But with this model, it appears without offloading, it does peak around 500. With software offloading enabled, speeds are almost as good as before upgrading from 19.07. It's still running a little slower as far a peak download, when I used to avg 800ish, and now it's 600ish. For my case, it doesn't matter one way or the other. I just thought I'd mention the observation.