one question sha256sum should not coincide with the version on the online imagebuild?

If builds don't ask include the same packages, they have different checksums. Apart from that some images are not reproducible yet. I'm working on a system to automatically check reproducibility and report issues but that's ongoing...

@aparcar can we hope of a partition map and a boot device tweaks ?

Many devices use now eMMC or external USB/uSD/…
They will not boot with the integrated boot.script and need advanced user intervention.

The size of these device may also require manual steps for preparing overlay or extroot and get full use of the complete storage.

OpenWrt will be more user-friendly with a boot.script and a partition map with overlay already tweaked for more generic use.

I was thinking if it can be handled by your OnlineImageBuilder ?

Another idea, is it doable to get custom-package defined by URL ?
It will give us access to unmaintened packages.

Please elaborate what devices/mappings you're thinking of. The server can always create images for you and you install them manually.

I am mostly using EspressoBin v7 with eMMC of 4Gb and ULTRA variant with 8Gb eMMC.
Both firmware from standard 21.02.0 in ext4 have only 2 partitions, first, very small for /boot (boot.scr, FDT file and kernel image) and a second one, small also for / (rootfs).
I always get a cloned ext4 rootfs to handle the rest of the eMMC in a third partition.
I am now testing with a f2fs overlay instead.
This third partition, extroot or overlay, is needed to get full use of the eMMC storage.
It also help of stability in case of crash, hang or power off !
But it is only possible with manual steps now.
These manual steps are needed after a first install but also at any sysupgrade.

The MTD likes devices do not need these, because the partition map is "better" handled, more frozen.

Another partition map may fit other use case, as a fourth one for persistent data, or another usage I have not think of...

@vgaetera already helps a lot to get an end-user friendly manageable OpenWrt, with opkg and hotplug extras, and I already get all my needs for EspressoBin boards in Request for Best Practice for eMMC devices

Theses extras tweaks from @vgaetera with yours from Custom Online Image Builder and Upgrade Server may help OpenWrt to get in another step !

May be some parts need or will be upstreamed, like @vgaetera extras in a package, or device map in official image, or boot script multi devices handling in master, or more...

Hope only these ideas are not fully insane and get OpenWrt using more simple !

A new instance of the server was added running on a official (and much faster) OpenWrt server at https://sysupgrade.openwrt.org/. There is no "web frontend" added, for now it should be used via auc or luci-app-attendedsysupgrade. Please modify your local configurations at /etc/config/attendedsysupgrade and replace the server URL. Custom defaults are not enabled.

The existing server at asu.aparcar.org stays online and will be used for development, custom defaults and more versions are available there.

Please test it and report bugs. 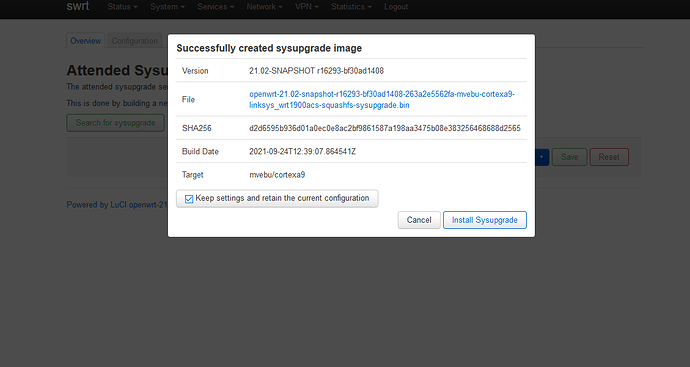 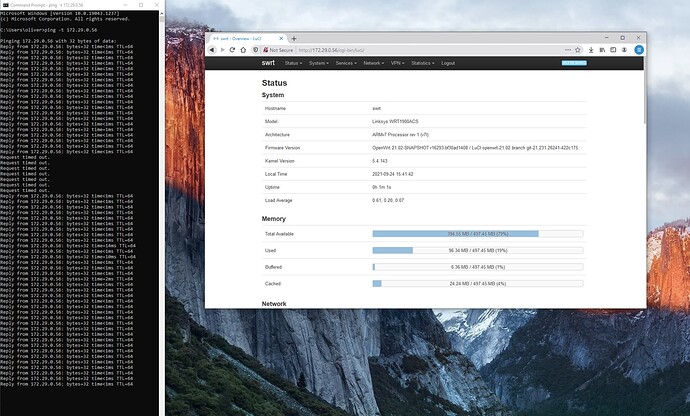 it looks like when we use Attended Sysupgrade and we have a script that we used before with Online ImageBuilder to create an image, there are problems keeping the settings when you update..
I just updated my wrt1900acs v2, configuring PPPoE access for IPv4/IPv6 Dual and I have continuous disconnections,

After a default reset I activated the script on the command line and had no problems!
Attended Sysupgrade works correctly only it seems that we can't really update with keeping the settings, script ...

I'm updating my router nearly on a daily basis for testing and the configuration is kept.

I have compiled another image and I face the same problem, is it the fault of the script I am running?

This script is very strange !
You have a lot of same options with different values...

Other users report that keeping the configuration works fine. Files outside /etc/ are normally not kept between sysupgrades. I can not offer support for the functionality of your custom setups. Good luck.

@aparcar I am trying to build SNAPSHOT image for Raspberry Pi 4B (64-bit), replacing "firewall iptables ip6tables kmod-ipt-offload" in the packages list with "firewall4". But I am getting the following error (no build log):

If I do "opkg list *firewall*" I see "firewall4" package available. Any idea why the online imagebuilder is giving this error? Thanks in advance.

I get the same error when trying to build with hostapd-openssl. while replacing ath10k-ct with non ct driver works well.

Please provide full build requests. What release, which profile, which packages, which server?

I try 21.02-SNAPSHOT target=tplink_archer-c7-v2, and in the customize pad, I add
hostapd-openssl and get asu.build.PackageSelectionError, while replacing ath10k-ct with non ct works.

Anyway, this is a great tool. Appreciate the new feature Custom script to run on first boot

@aparcar i want to build an image on 19.07 SNAPSHOT and get an error

I omitted something, called, package compatibility ?