Just was looking at the LUCI traffic realtime graph on my x86 router box. Have only been running this several weeks, and haven't really been looking at the traffic graphs much

Anyway, I was watching during a large download on the 5ghz wifi, and observed that the average numbers looked inaccurately low. Guessed that maybe the average is over the full screen, and it was averaging in all that 0 data speed time, so figured it would fix itself as the graph filled up. Then as I watched, the number counted NEGATIVE and kept going, ended up looking like this. This is the standard 18.06.2 for x86... Not sure if this is the best place to report it, but here it is. 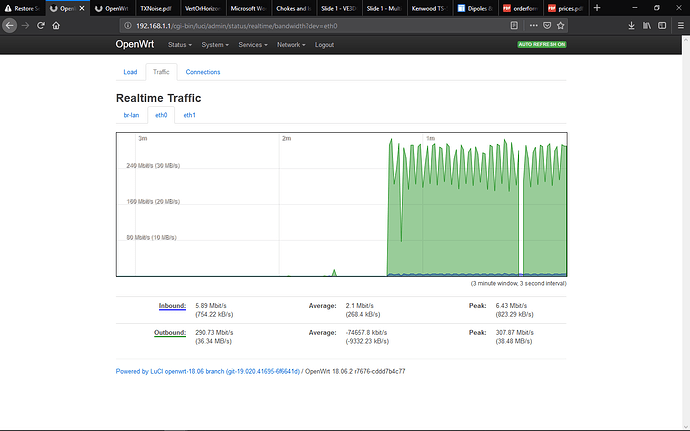 Sorry, was embarrasedly editing that it wasn't on my C7 AP box, it was on the main Zotac x86 routing box....

Probably something like that. Counting in the wrong direction? I saw on the Outbound, with the peak of 300mbit, and a average of 270-290mbit (this was a mulit Gb download over the 5ghz wifi) the average was only something like 2-3mbits. Then as I watched, it counted down thru 0 and went into big negative numbers. Weird.

Also, would like to know if bug reports like this are best reported here, or in the general using OpenWrt forum, or someplace else. Have another, more serious one, where my C7 AP setup box is occasionally dropping the 2.4ghz wifi, or something resembling that, that I want to bring up.