New users of OpenWrt often get into OpenWrt because they want a more advanced or customizable or secure network than what is possible with an off the shelf wifi router device running factory firmware. However, getting things set up is easier if they understand the proper usage of network terminology. Because they are often using devices that are "all in one" and sold as a router, there is a tendency to call their device "a router". In reality it's useful to have a little more nuance so that when they ask questions the more network savvy people understand what they mean. Here are some basic terminology definitions:

When one buys an "all in one" device and configures it normally, it is simultaneously a router, a managed switch, and an access point (or two) in one piece of hardware. It is also possible to configure these all in one devices as strictly an access point (dumb AP). In this role its goal is just to move packets from the wired LAN to WiFi clients and back without considering the IP/IPv6 addresses at all, just using the MAC addresses of the packets. In this role, it doesn't normally do firewalling or decision making about whether the packets are allowed, or should be sent out one connection or another. It is in essence a "switch" in which one port is "plugged into the wired network" and one port is "plugged into the air".

As networks are getting more comprehensive, including IPTV, VOIP phones, laptops, smartphones, desktop machines, servers, and internet of things appliances, more and more people are finding it important to segment their network into separate groups of devices using VLANs and different ESSIDs for different groups of devices. In general there is a mapping between ESSID and VLAN tag so that all devices connecting to a given ESSID are also connected to a particular VLAN on the wired side.

Hopefully this post can act as a primer for those getting started in OpenWrt so that they can better ask questions, and understand the answers they get.

Very nice description!
Maybe you could add the modem (and the modem-router/wireless) as well? I know it is not so popular with OpenWrt, but that could help

All in one device: a device with a CPU, usually a built in multi-port switch, wifi radios, and optionally a modem.

Sure will do. Also added ONTs

Discourse forum is very suitable for troubleshooting.
However, for this kind of reference documentation, not so much.

It's difficult to encounter useful information among the piles of threads.
Also, it's problematic to update and maintain for other community members.

Consider creating an article or improving the existing ones.
This way your contribution can be significantly more valuable.

Yeah, I had some reservations about this, but it's so common to answer the same kinds of questions... "I have a router here and it's connected to a router there and then there's a router over here and the ISP router is doing this and that..." Turns out its an ONT connected to an ISP supplied router in bridge mode which is connected to one OpenWrt router, and then 2 OpenWrt dumb APs or something like that. It's over and over in the forum. Having a quick thread where the information is hashed out and then is easily linked within the forum seems really useful. To tell you the truth, I don't find finding material in the wiki particularly easy or intuitive.

I certainly don't want to cause a fuss here, but it seemed like there was room for some very basic information in the forum that can help people with common issues they're discussing in the forum and being super easy to find and link from the forum: 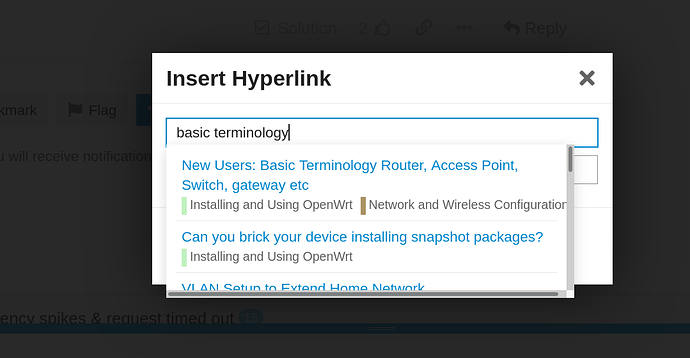 I wouldn't consider having a CPU to be a distinguishing feature of all-in-one devices, all devices have one to some extent. However the definition from many ISPs and users for these devices often includes VoIP features (a basic pbx, FXS ports (maybe even still a local ISDN S0 bus) and often DECT) within the same device as well - particularly for xDSL and cable contracts. Many users have grown accustomed to expect this functionality and aren't that happy to learn that this isn't available (DECT, ISDN) or rather difficult to set up (asterisk + chan_lantiq to use the analogue FXS ports of many lantiq based devices) while running OpenWrt.

Just be aware that utilizing forum search to learn terminology may not be so intuitive.
Meanwhile, wiki is a well-known knowledge source with multiple navigation methods.
And the beginner/FAQ sections seem quite appropriate for this kind of information.
In any case, I appreciate your continuous effort for helping the OpenWrt community!

In theory I second the wiki is more searchable than thevforum stance.
But in this case, I assume those that should read it will not find it by themselves, but will be given a link, and then all that matters is that the linker knows....