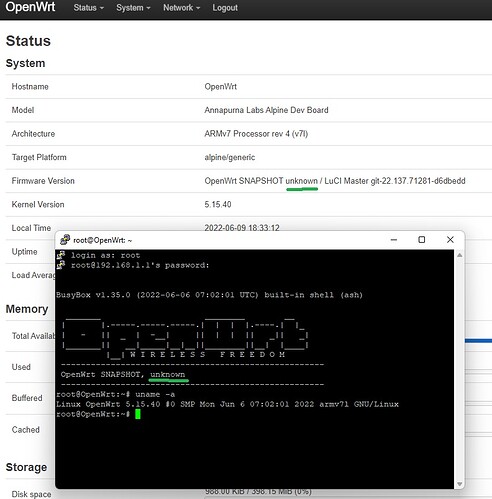 My build system is debian bookworm amd64.
https://github.com/egorenar/openwrt/archive/refs/heads/netgear-r9000.zip
I unzipped it then entered to directory.
And I did Quickstart process.
I only changed target for Annapurna Labs Alpine in "make menuconfig".
And just did "make".
There was no error or warning.
Flashing had no problem. Flashing went well too.
But I had no release version in Firmware Version.
What can i do fot it?
Thank you.

Any guidance anyone can give would be a great help.

Ive built this firmware more than a few times (I like to tinker). Here is a (slightly stripped down) version of my build script:

What can i do fot it?

Just a guess, but it might because you are building from a zipped archive. Ive never had this issue when cloning the build system using git (see above code for example).

@egorenar
In dmesg, seeing a lot of weird messages:

its spamming like crazy, is this something I configured wrong?

I got this as well after an update yesterday.
This is new, the firmware built a week ago didn't have this issue.
Investigating, will report back.

So we wait for the patch to be applied by OpenWRT in their repo?

I updated the kernel config and pushed the fix to my branch.
Just rebuild the fw.

Oh. Thank you.
You give version number to me.

Thank you for the swift resolution!

Tried to use a Cisco GLC-TE SFP module in my R9000 today, and while al_eth found the module and initialized it, I get bizarre i2c errors during module setup.

I get i2c_dw_handle_tx_abort: lost arbitration and i2c_designware fd880000.i2c-pld: controller timed out errors, which seems to be a running theme with Annapurna hardware.

See this thread about i2c malfunctions on the Ubiquiti UDM-Pro, which also uses an Annapurna chip.

Thanks a lot for your great job.
I've tried to get the sfp port working (it doesn't recognize my sfp module - looks like the sfp kernel module is not loaded).
While searching for the root of the problem i ran into these errors:

what i tried to fix the problem:
-rebuild the firmware (following the build script posted by [AnthonyWBarone])
-reflash (via sysupgrade) with and without keeping the settings

looks like it doesn't include the modules into the firmware? Any idea?
Thank you.

I double checked and that is the file I downloaded. I am going to try AnthonyWBarone's directions and clone the repository and see if that makes a difference.

I think you need to enable the corresponding package with "make menuconfig" first.
See package "kmod-sfp". it's not enabled by default i think.

thank you for your feedback.
kmod-sfp it is not actived by default but i already activated it in "make menuconfig" under "Network Devices" kmod-sfp <*>.
Even tried with the "Select all kernel module packages by default" option in Global build settings.
If i check the path /lib/modules/5.15.45 on the device for the kmod-sfp file there is nothing with this name.
It is enabled in make menuconfig, compiles without error but it doesn't work.

Last thing i tried is manual install of the kmod-sfp ipk:

So the module seems to be installed but isn't working.

Is there a way to do a complete reflash (not only sysupgrade) ?

On the build system in "openwrt/package/kernel/linux/modules/netdevices.mk"

thinking about it, you probably would need to actually run

You could also (just to check if it is found on the system, not to actually load it) run

If the sfp module isnt there, then you'll need to enable it during the build with make menuconfig like @egorenar said

I get these warnings also when running depmod. Im not sure if not having them is actually causing problems, but considering these files are quite small (especially in a squashfs image) and there is a whole lot of space available on the R9000 Id argue it is probably worth including them in the firmware image.

Im sure there is a more elegant (and automatic) way to do this though...

For what it's worth, here's the script I use to build an image for the R9000:

Just updated it this morning using this method

Friends, I have been looking for how to install OpenWrt on my R9000 and I found this thread and I see that they have been doing a strong job, unfortunately I do not know anything about programming so I can not help much