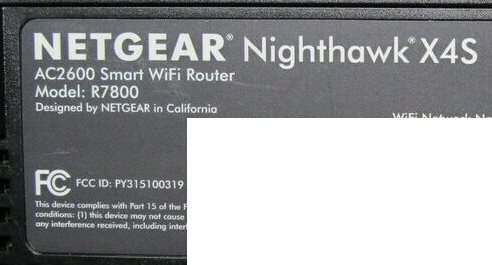 Switch VLAN looks like the most "correct" option but none seem to work. "@wan" (not wan6) has the fastest performance but I assume does not shape ipv6 whatsoever. 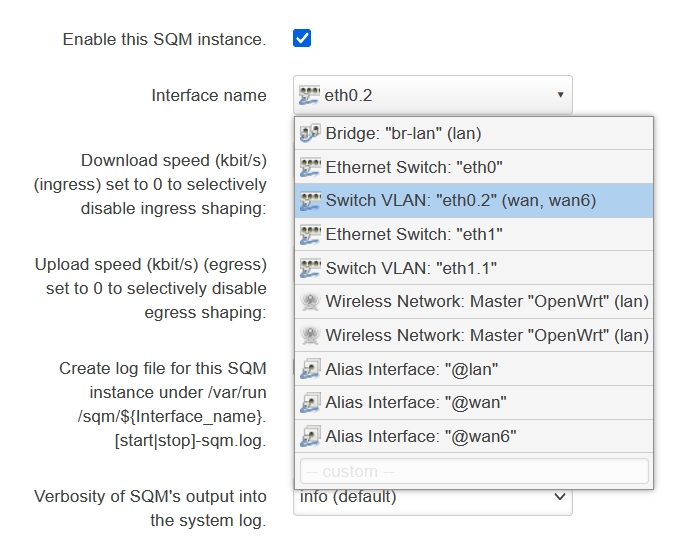 This is a new (used) router freshly installed with OpenWRT 21.02. I haven't done anything else to it. The wifi isn't even on.

I replaced my old router partially because SQM (codel, not CAKE) was stuck in that same 100 Mbps range:

Netgear R6220: SQM Results (Downstream Cut in Half) and My Optimal Settings Hardware Questions and Recommendations

The below may be pointless. I'm going to return to this thread once I figure out what flow_offloading is. Thread: TLDR: If you suspect your device has a slow CPU but still want SQM, try fq_codel and simplest. My best settings on a 250Mbps down/10 Mbps up cable line: 75% of raw downstream, 95% of raw upstream. Higher values seemed to hit a cpu penalty. config queue option interface 'wan' option debug_logging '0' option linklayer 'ethernet' option overhead '18'…

Maybe I need one of the custom builds? Any advice?

R7800 has no problem shaping 250Mbps with cake and you have the choice to use @ACwifidude or my build with fq_codel NSS HW acceleration, or you can build your own from our repo. R7800 with NSS can shape 900Mbps with 3% cpu load on nss_fq_codel. R7800 also has damn good wifi. At 700Mbps 5G wifi load is only around 50%. For me it is one of the best all around units. From the reports regarding sqm RT3200 might be good unit if only routing is important, but my experience with wifi on the MT device…

edit: fq_codel + simple.qos brings performance closer to line speed but has room for improvement. 200 Mbps input leads to 183 Mbps on waveform.com. Base OpenWRT build (no forks).

aybe I need one of the custom builds? Any advice?

CAKE SQM performance appears to have severely nose dived over the last releases.

It is interesting that your R7800 is stuck at 110 Mbps too. Obviously it has a lot more CPU power than my ER-X, so it's odd that it is stuck at the same place.

Edit: fq_codel/simple.qos improves download to ~155 Mbps from ~110 Mbps on my ER-X. Appreciate the suggestions later in this thread.

This is dual core router, and is most likely using a single core at this time: try enabling packet steering and see if that makes a difference. Helped a ton for codel. With CAKE around 128 Mbps.

How is packet steering decided to be on or off by default?

Well, the UI has a comment that “it may improve performance or make it worse” and it is always off. What is your CPU utilization with CAKE? You are better off using “htop -d 1” to see utilization per a core.
Two more things I suggest you do: 1) cpu freq transitions are expensive so use performance governor (it is set per each core on this router) and 2) try IRQ assignments (not irqbalance) per core. Wifi2, wifi5, eh0 and eth1 can all be controlled I think. I would suggest moving eth0 to the second core. If eth0/1 and not movable, then move both wifi interfaces to the second core.

I was able to go over 300Mbps with fq_code/simple on this router when I was using it.

Helped a ton for codel. With CAKE around 128 Mbps.

Did you restart the router or run “reload_config”?

Many of the performance tweaks in the R7800 performance thread are still likely to be useful for 21.02 - especially as the cpu frequency management is essentially unchanged and, unfortunately, not optimal for best performance.

Thanks for the advice.

Did you restart the router or run “reload_config”?

No, but I did now (reload_config).

I didn't verify that it was set to ondemand, however.

Have both Master and OpenWrt 21.02 builds with hardware offloading using the two NSS cores. All Master R7800 builds are tested before positing (router boots + wifi works). I don't own a C2600, EA7500v1, EA8500, G10, NBG6817, R7500v1, R7500v2, or d7800 (builds for these are untested - make sure you known how to tftp if you get in trouble) Build Goals: Maximum ipq806x performance for Gigabit WAN connections. Simple and compatible with master (able to flash back and forth if you like testing d…

the best for latency is somewhere around 200-220Mbit.

These are my settings in local startup and I reboot every time I changed something. I also changed to "Bootstrap" from their default material theme. Cleared out everything when I did the firmware install (no config carryover).

I might go back to 21.02 and try max performance and see if it can keep up with CAKE. I'm not hopeful based on my other results. There are 3 devices hardwired to the r7800 but I don't think any of them are causing problems. Wifi remains off while I test SQM.

I ran top during one of the tests and CPU remained >40% idle but I didn't get a per-core breakdown.

If I was starting from scratch I might try a longer term bufferbloat test to give the governor time to shift into faster CPU mode. But I'm already sick of configuring for marginal power usage gains.

Installed and enabled irqbalance. Setting the assignments was beyond my skills with Google. Set packet steering in the luci web UI (network-interfaces-global).

Looks like I'm maxing out one of two cores in htop when I run a speedtest. Other core around 40-60%.

Settled on fq_codel/simple.qos. Apparently codel isn't designed for near 0 latency so I'm happy with 200+ down and <30ms latency. I'd do CAKE if it only took off 20 Mb, but beyond that I prefer speed. CAKE still can't crack 160.

It should be 220Mbit (not 220000) and 114Mbit (not 114000). See if that helps. NSS fq codel will average “high B” / “low A” on most bufferbloat measures. Most ipq806x devices can do cake at nearly that speed (normal openwrt, non-NSS build). Cake will give better latency if you are looking for peak performance at that ISP speed. I’d turn cake down to 160Mbit. Defer towards lower (maybe 150 or 140) - should find a sweet spot of consistent A+ bufferbloat for your connection. NSS hardware off…

Wifi is on now, though not heavily used. Performance holds up. Wifi bufferbloat tests indicate some <100ms download latency but that's fine. (58 on waveform). Still need to enable the other wifi radio.

One of the reasons I am running wrt3200acm and it can shape 300+ Mbps bidirectionally and still have some CPU to spare as long as both cores are used.