Hi
I'm new here, also new to OpenWrt, I like the interface and ease of use
I recently moved from DSL to Fiber optic, they use VLAN ID 881 / PRIO 0
I was given a nokia router g-240w-a (I guess the same as alcatel lucent but different box), this wifi sucks big time, if you move 3 meters away the wifi speed drops significantly
I've been using Netgear R7500v2 previousy when I was using DSL along with PPPoE, with Fiber connection they still use PPPoE, Now I can't get it to work using Vlan tagging, I tried stock firmware, also DDWRT, I also tried OpenWrt but still can't get it to work.
Here is what I did
1- I set G-240W-a port one to bridge
2- followed this tutorial https://horvathit.com/2017/12/13/using-lede-openwrt-firmware-with-century-link-fiber/ but instead used eth0
so VLAN 881: CPU(eth0) tagged, WAN tagged, CPU(eth1) and LAN 1-2-3-4 all off
3- connected nokia (port 1) to R7500v2 (port internet)
this didn't work, I'm not sure what I'm doing wrong!? I'm not sure if the ISP is blocking anyone to use their routers or they're allowing my internet based the Nokia MAC address
Now I can't access netgear OpenWrt anymore, I'm not sure how to factory reset it, I may need to go to recovery mode, never done it 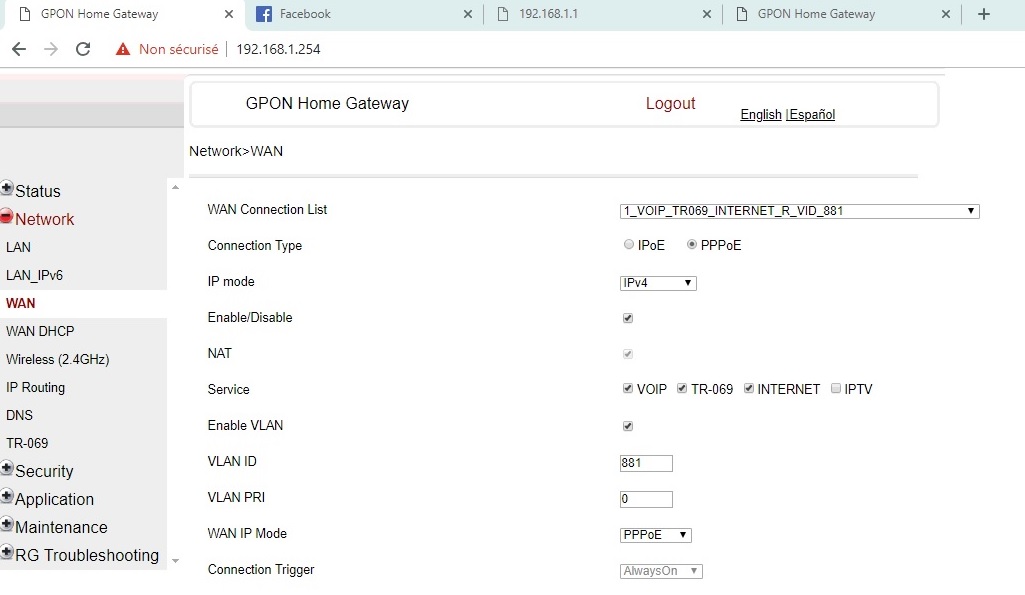 Don't turn all the LAN ports off you will lose access. It is best to log in to the router by wifi while reconfiguring the switch.

You want one of the CPU ports going to the LAN ports as usual, and the other one going to the WAN port, and tagging 881 on the way out. Change the VLAN number to 881 and set tagged on the WAN port, but leave untagged on the CPU. This lets the switch handle adding / removing tags and you don't have to reconfigure the wan network at all.

Some switch hardware cannot directly handle VLAN numbers higher than 15 or 127, in those cases you will need to manually edit the /etc/config/network file and add an option vid 881 to emit the proper tags.

is that how it's supposed to be?

Aside from the tasks of getting it to work in the first place, you need to be aware that your ipq8064 router will max out at routing somewhere between 350-500 MBit/s, so if your new fibre connection is faster than that, you will have to look for a different router (x86 or high-end mvebu) to achieve line speed.