For a little more clarity here is an image explaining what I am aiming to do. 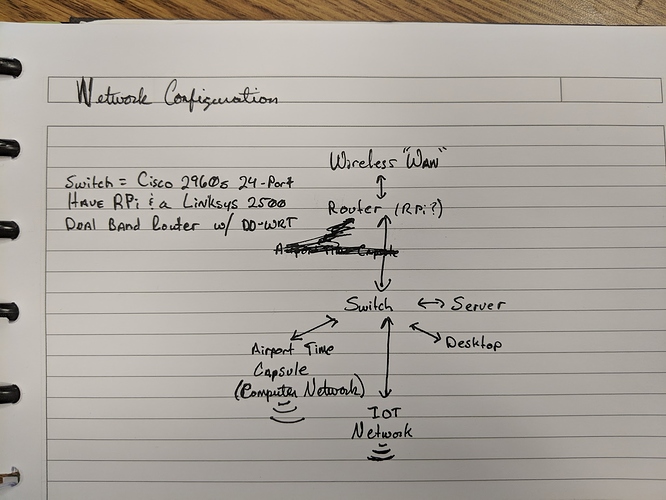 The issue is that on the other side of the Wireless "WAN" is a modem/router I have no control over. My intended goal is as follows:

What I have been successful so far at doing is connecting to the Wifi as a client and I was able to route the eth0 (LAN) connection using relayd. However, that doesn't allow me to setup a DHCP server and VLAN's and still maintain an active internet connection.

The official guide doesn't clarify anything and my GoogleFu is coming up short.

EDIT Wrote up a little tutorial below on what I ultimately did to get my setup working.

relayd is the opposite of what you intended.

I think my GoogleFu was sending me down the wrong road.

So from here I should be able to setup the VLAN Tagging as intended by following the standard guide correct?

Yes, I think so

Following the link and the advice given by @trendy, I was able to get it working with ease.

I also disabled the default LAN connection by removing it from the LAN firewall connection, but only after I had made the VLAN interfaces and software VLAN connections in the LuCi configuration.

Here's the steps (Assuming you have a default config and/or understand you may need to reset...)

There are two parts to this. First go and config it to be attached to the WiFi you need to connect to. Easiest way is to go to Network --> Wireless and next to the description of the WiFi adapter click Scan. Select the WiFi in question and enter in the necessary info. It will offer to create a WWAN interface, accept the defaults there and continue to the next set of steps.

** Repeat each step above for each VLAN you wish to create **

Credit where credit is due, this blog post aided in solving some of the problem as well:
http://blog.sergem.net/jailing-iot-devices-with-openwrt/