Hello. Currently I have very old Linksys WRT160NL router, running dd-wrt. I want to update it not because it's old, but because of this:

I don't know what models are currently out there, but I am looking for a home router with good openwrt support which needs to have the following characteristics:

What I don't care about:

I will be glad if you can suggest something. As you can see I don't need something new, and I even think an older model can be appropriate as it had time to show how well it behaves with openwrt.

Bear in mind that the 5Ghz band has a quite shorter range than 2.4Ghz and doesn't traverse walls well.

So, even with a high power 5Ghz radio you can get away with one brick wall for example, but no more than this. Also the communication is two-way. Increasing the TX power on the router will not change the TX power of the devices.

With that said, I have been using an old (and discontinued) D-Link DIR-859 A3 (it runs OpenWRT A1 version fine and it is very stable) in a cottage (sold here in Brazil as a "high power" device, see the box below). While the wifi throughput left to be desired, the 2.4Ghz range is quite good. Since this cottage is far from any neighbors and in the country side, I changed country to PA and with this I was able to increase power to 30dBm (1000mW).

But the 5Ghz range even at this power is much shorter than 2.4Ghz band.

Also consider that this router has only 16MB flash/64MB RAM and a single core CPU. While I believe you could run OpenVPN server (I have not tried), there wouldn't be much remaining storage for anything else and RAM could not be sufficient to run OpenVPN server.

In this case I would suggest you to consider using Wireguard rather than OpenVPN server. Wireguard is lighter on system resources that OpenVPN, and due to a single core CPU would possibly provide a better VPN performance than OpenVPN. 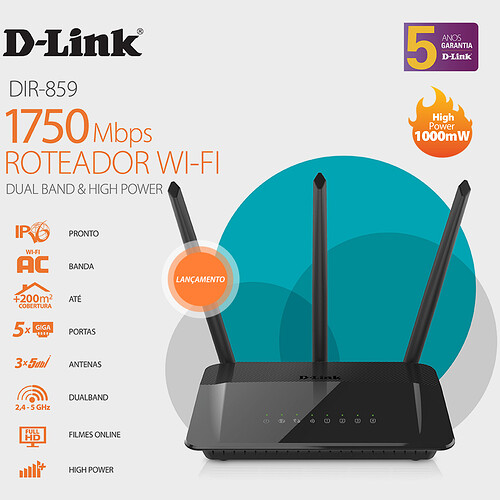 Hi. Thanks for the info. I can't get this unit easily here. Nobody is selling it in Europe as far as I can find, and I don't want to order it from Canada or USA, where they appear on ebay.

What requirements do vpn server generaly have? What is the difference between OpenVPN and Wireguard? (I want to remind that I will probably be the only one using this server when I travel.)

I would not try to use 2.4 at all inside an apartment house. In any urban setting the 2.4 band is basically a wall of noise. Hopefully all of your client hardware supports 5 GHz.

The situation would really benefit from a separate AP in the bedroom with a wired connection to the main router, if that is at all possible.