Hello I like to install adguard I followed this guide

Back here one more again - but as you well know, before we can get to the " get-go " - we must indulge ourselves with the time honored tradition of " The Intro " - check out a Soul Classic - https://www.youtube.com/watch?v=9UTqdGZt2_4 and as always lyrics - https://genius.com/Linda-jones-hypnotized-lyrics - and to keep the Groove flowing at the outset - Bounce - https://www.youtube.com/watch?v=CdvITn5cAVc - for the lyrical - https://genius.com/Martha-reeves-and-the-vandellas-dancing-in-th…

I get "permission denied" maybe it's something simple but I'm lost

I did this one?
If I check in winscp the directory has 755 also the adguardhome file has 755

Since Linux is case sensitive, and the references in that tutorial are to "AdGuardHome", you may have issues with your naming "adguardhome".

I copied and past the line but still no acces 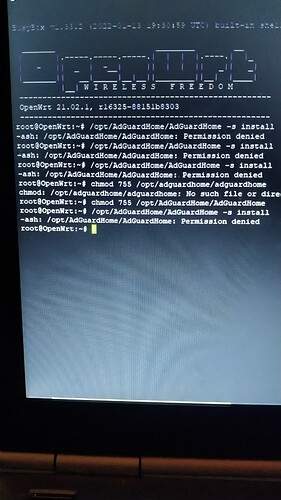 I used another command line and now it works, adguard started to install but why???